Map is here! Rest of the detailed worlds of Netherspace are here!

This is pretty much the rest of Netherspace Sector, including what has come before, and what was never revealed.

67 Tethys
Abandoned System ; caused by natural disaster (bombarded by a gamma ray burst from nearby black holes, most likely), leaving behind evidence of an impressive ancient culture that never developed spaceflight but which had an enormously sophisticated and technologically advanced planet. Had they been able to move in to space they might have escaped their fate.

06 The Tiberon Anomaly
First recorded by Old Era Spacers during the first colonial expansion, the Tiberon Anomaly is a region of space egregiously warped and damaged by an unknown energy source, leading to wormholes that actually project back and forward in time. Speculated that the weakening of space explains the problem with Kedrak Prime’s sun. Others suspect that the Keddirak were once more technologically advanced, or had precursors who created a timespace weapon that damaged the region badly long ago.

46 Serpicus
A peaceful, primitive species of reptilians dwell on Serpicus, which is a pleasant, humanlike world. The reptiloids of Serpicus are currently dealing with the incursion of a New Germanican starbase in their system, and active colonization efforts that are simultaneously trying to subjugate and enslave the Serpicans. The leader of this colonization is Talia Guthrie, Supreme Commander of Colonial Station Alpha. It is so far New Germanica’s best colonization effort. A major goal is to create a new refinery and generator to replenish the exhausted foldspace engines of the colony ship, to allow for communication and travel back to the homeworld. The colony knows that the homeworld survived a Void Lord incursion but for secrecy has not been notified that they have gained access to anti-matter technology.

62 NGC 44379-8 (Destination)
This abandoned system contains no noteworthy resources and an ordinary binary star system. Unknown to most, the indigenous species is an offshoot of humanity which was captured and placed in a colony in the system’s Kuiper Belt, in a complex series of engineered worlds, and hidden through cloaking technology. The humans are aggressive and have developed fairly current technology over the centuries; all are descended (possibly) from the original spacers who scouted the system but disappeared nearly a thousand years ago. Their captors are a mystery. The spacers call their home “Destination.”

15 Empty Space (Void station Vartinimos)
Hidden in this otherwise empty sector is the Vartinimos Naval Yard, built in a region where a brown dwarf and the debris of a half-formed planetary system still resides. The naval yard is the home base of a major hidden Void Lord fleet led by the Void Knight Commodore Malice, a cunning human woman converted in the early years of the Void Lord invasion to the cause.

13 The Second Anomaly
This anomalous region is like the Tiberon Anomaly recorded in hex 04, but unlike that hex this one has not been charted, though Void Lord scouts have found the anomaly. The fleet in hex 07 has a contingent plan to retreat to a known safe harbor in this sector which will mask their vessels; they are currently investigating the possibility they can use the wormholes to return to an earlier era and advance their invasion in a time before human expansion had taken hold, likely during the early era of Spacer Colonization when humanity would be especially vulnerable, or even as far back as the pre-spacefaring era of mankind (plot hook, anyone?)

01, 53, 73, 68 Black Holes
Cataloged black holes, there are an anomalously large number in the region.

27 NGC 1429 (Habaris)
The system of Habaris is mostly uninhabitable but a thriving colony of aggressive space savages dwells in a shanty town of collected asteroid bases and half-functioning ships. Unknown as to why they congregated here. Their presence makes for a dangerous risk to outsiders. One theory is that they are survivors of the Void Lord purge who escaped mental enslavement, but at the expense of sanity. The system also contains extensive colony remains of what was once a New Germanican station and city on Habaris Prime; evidence suggests that it was annihilated by the Void Lords. There are a handful of survivors who are currently dwelling in mining tunnels where they are hiding from the space savages, who they know arrived like dogs of war in the wake of the Void Lords.

47 Remandalis
The human colonists of Remandalis were related to the New Germanicans, and was their first colony attempt over two centuries ago, but it suffered a terrible fate as their world suffered a natural disaster due to a cometary bombardment. The survivors are technologically savvy and peaceful, but dwell in deep subterranean bunkers due to the utterly wild and uninhabitable surface, which is wracked by super-storms and extreme radiation. The colonists have discovered subterranean remains of an incredibly old civilization that they now believe colonized the planet three million years ago for unknown reasons, and have found evidence it may have harbored prisons for incredibly ancient aliens. The chamber of one such prison has been excavated, revealing an immense corpse and fossil skeleton nearly a quarter mile long.

21 Bothar
The world of Bothar is a colony of the aggressive Quinlons, who migrated in to this region a few years after the passing of the Void Lords. The original colony was a monitoring station, used by the Quinlon mercenaries working for the Empire during the war, but it has since been claimed as a Quinlon imperial territory after the Quinlon/Makamian relations collapsed. The current base has a small defense force and refuels the Quinlon vessels that operate in the region. In the Dark Stars universe the Quinlons are aggressive, dangerous opponents of humanity, and look a bit like they walked off the set of Fury Road and onto the set of Predators….but with even more bony bits sticking out.

63 NGC-184923 (Hapson’s World)
The abandoned world of this trinary system is wracked with bizarre gravitational anomalies caused by severe local spatial distortions. There is a small research station in a stable corner of the system, the Kaon Monitoring Station, which is actually a front for military weapon design by the Toho Megacorporation, operating in what it considers independent space to avoid Imperial scrutiny.

33 Chalice
The grassy, friendly planet of Chalice is offset by the alien, aggressive centauroid Hammagath, who are primitive but powerful beings. They dislike offworlders, especially due to the fact that Quinlon like to kidnap them and haul them off to arenas for battle.

31 Graedos
This system has one habitable planet named Graedos locally, with indigenous falcon-men, who call themselves “the Graedii.” They are naturally aggressive and are locked in a lengthy cultural dark age of war and religious persecution. Visitors admire the planet’s impressive natural spires turned into amazing fortresses.

61 NGC 1338765
This cataloged star system shows evidence of an advanced ancient civilization that wiped itself out. The system is littered with ancient structures dating back 1.2 million years, and is noted for its impressive graveyard of ancient vessels, some of which still contain salvageable lost tech.

65 Hathor
The denizens of Hathor are humanoids who look very close to humans, and failed research efforts to study the Hathorites have failed to determine if they are genetically related or an example of convergent evolution. What prompts such questions is the well-established society of quasi-Egyptian ways, beliefs and architecture that encompass the equatorial band of life on the planet. The similarities are regarded as too much for comfort, and it is believed by those who have visited that the Hathorite reflect a lost group of humanity that was kidnapped and displaced on this world. Also of note is that the rogue Void Knight Sapellar, a reptiloid convert who somehow escaped control of the Void Lords during their retreat, has come to reside on Hathor and has convinced the locals to worship him as a god. He has been single-handedly escalating their society from an ancient tech civilization to a near-future singularity in the space of a decade.

30 Trigaros
The second local Quinlon colony, Trigaros was a rough world that had been terraformed partially back in the late 29th century before the Megacorp Ion abandoned the project, and also abandoned hundreds of workers for unknown reasons possibly related to an extraction cost. The humans who survived on the planet were able to hang on until the Quinlons arrived after the Void Lords fled the sector, and took over. For the last decade Trigaros has turned into a Quinlon military enclave and a refuge for the worst scum and villainy at the edge of frontier space.


The second system once claimed during the Megacorporate era by Ion, Optima was fully terraformed for human use when Ion folded during the Corporate Wars. The survivors were left to fend for themselves, but in 2254 a rogue moon entered the system, causing havoc with local orbits. Optima appeared doomed, but the survivors lucked out when a exploration ship of Mindoids stumbled across the colonists and assisted in moving a large number to the outer moon of Severis. As Optima was turned into a molten world when its own moons collided in the wake of the rogue planet’s passing, they found instead a weird future in the Mindoid colony station on Severis. Now the humans work as mentally enslaved agents of the Mindoids. 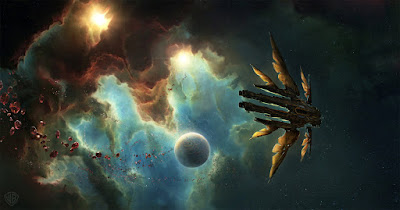