Battle of the Super Hero RPGs! 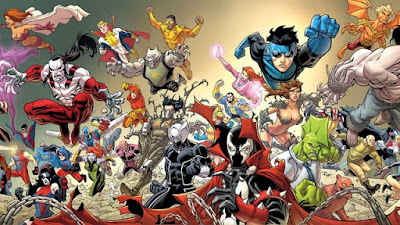 In the wake of Batman V. Superman I've been thinking more about that idea for a supers game. I have a few hurdles to make....including the top problem: convincing my players to try it out --easier said than done, but thanks to the proliferation of superheroes in cinema this might be easier now than it used to be (at least, barring time commitments to D&D 5E and White Star).

But what system and setting? I've got a few choices....

Mutants & Masterminds 3rd edition -- yes, if crunch and time sink design is what I'm looking for. PRO: elaborate, build anything, mechanics are no doubt smooth once you learn it; CON: gotta learn it, no time.

DC Adventures -- ideal as a resource for DC gaming, but based on MnM 3rd so see above. PRO: most of the DC Universe statted out so easy access; CON: gotta learn it (see MnM).

Guardians -- the definitive OSR gaming system based on OD&D. A good prospect, but by nature of its source engine a bit limited (so, the reverse problem of MnM above). PRO: very easy to learn and get a game going; CON: a hardcore OSR environment seems a bit too sparse for comic adventuring...I could be wrong though (I was wrong about White Star, for example).

Savage Worlds Supers -- handled with the Super Powers Companion this might be my best bet; and i can use Necessary Evil and its sequel, Breakout, as settings. PRO: Savage Worlds is super flexy and has the support to do this; CON: the system seems to melt down at higher power levels.

Mutants & Marvels -- the definitive FASERIP variant I own, this is tempting but I'd want to jump to 2nd edition, which I don't have in print. PRO: it's really easy to pick up and very complete in a slim volume. CON: it's not a pure FASERIP clone, but embeds some D20 System stuff in it, which can be either a weakness or an advantage depending on your point of view.

Supers! -- the comic system powered by what looks to me like the D6 System (or a variant thereof), this is a nice production available in POD, but might be a bit more elaborate than I want (somewhere between Savage Worlds and MnM in complexity). PRO: D6 System is tried and tested for supers gaming; CON: see MnM above...this system (or maybe its just the rules) look a bit cluttered to me, but I'm reading it now and that opinion could change quickly.

Icons -- a slim and introductory system with some modern design elements aimed at younger or newer gamers. PRO: easy system; CON: might be just a bit too "new game design" style for my tastes.

MEGS System/DC Heroes RPG: I have 3rd edition. Nothing at all preventing me from running this....PRO: best super hero system EVER; CON: also quite dead and OOP, hard to sell players on dead and OOP games in my neck of the woods.

System I don't own yet but will get: FASERIP by Blacky the Blackball, of Dark Dungeons OSR fame. If it's a pure FASERIP version I may bump this up the list. Also considering D6Powers and BASH! which I actually own the old version of and kinda like.

Stay tuned as they battle it all out! My money's on Savage Worlds Supers but FASERIP could come out of left field...and DC Adventures could overwhelm my sense of propriety and convince me that using a load of preconstructed iconics is the easiest way.