Blaaagh Monday! The Lazarus War I: Artefact by Jamie Sawyer and more 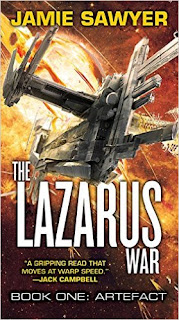 Too much work....too much home stuff....everyone came down with strep in the last few days (including me, right now....ugh...) and so I am behind in setting up blog content. Here are six random things/comments going on:

1. First: go read The Lazarus War I: Artefact by Jamie Sawyer. It's a brilliant mesh of military SF and horror that I did not expect. In the future, mankind is facing a two front war with itself and an alien race that is (as is often the case) inimical to our understanding of life. The cutting edge soldiers are simulants...body sleeves controlled remotely by dedicated specialists who live, fight and die over and over again in their enhance bodies on the warfront. The story focuses on a team of veteran simulant pilots sent deep into the most dangerous corner of the alien territory...the Maelstrom, at which point I will say no more. Amazingly brisk, compelling read.

2. I am not buying in to Tom Clancy's The Division. I tried the beta on PS4 and was left with the most "meh" feeling I could ever experience. I'll wait for a game like this that involves alien invasions, zombies, or something more entertaining than the dubious practice of shooting desperate looters and survivors in a plague-ridden New York. Reviews may change my mind (I really felt like it could use a Die Hard kind of twist) but the beta was a let down, and felt to me like it was stepping in to some really creepy territory in terms of how an actual CDC event like this would play out. In Tom Clancy games, where realism (or the nod to such) is paramount, The Division feels like a step away. Still....at least it seems to have more to do than Rainbow Six: Siege...

3. Ubisoft's Far Cry: Primal is awesome, though. More on that soon. Whole family is playing it --including son, under careful supervision; the game is a bit on the comic-book side of neolithic life, but it's still far more accurate than any other effort in video game land to date.

4. Savage World's Beasts & Barbarians series is really cool, and worth checking out if you need a swords & sorcery & sandals fix.

5. Skyscrapers & Sorcery is also far more intriguing than I had anticipated. I am not sure precisely where to define it in the genre of modern fantasy, but it sort of rests in its own space and lets you fill in the blanks. My group has expressed an interest in testing it out soon.

6. Curse of Strahd is neat, but my plans to kidnap the current group of D&D 5E players into the Domains of Dread (well, Barovoia anyway) has been waylaid by the fact that the book is really aimed at a level 1-10 experience and the current group is already level 7-8.