Damnit. Seriously...I don't need to be backing any Kickstarters....but Kult.....Kult is one of a handful of games that hold a very special place to me, and it remains my preferred grim, nihilistic gnostic horror setting and system. I may have to back this.

If you're not sure what the deal with Kult is, it's a horror game that originated in Sweden and went through roughly three iterations state side over the last few decades. It has had a card game based on it with gorgeously disturbing art. It's the game you go to play when you are feeling like you want to mix a bit of Clive Barker's Hellraiser with a dollop of Angel Heart, and maybe a dash of Twin Peaks thrown in for good measure (but in which everyone ends up in Oblivion at the end). It's about Metropolis, the city of the damned which stretches from one edge of your nightmare to the next, luring you to at last wake up from the "reality" of your current dream.

Back in the day I ran Kult adventures but not many campaigns....characters in my Kult games had a definite lifespan, either due to their frail mortality or their delicate psyches being rocked to bits. It was a tougher, meaner game I often felt than Call of Cthulhu. CoC was perverse in its aim at making man a speck of inconsequence on the inimical universe, yes. But Kult? Kult made the universe an intimate nightmare, a dreaming byproduct of purgatory for dead gods from which we were all one bad experience away from awakening from. So in CoC sure, the universe care nothing for us and star gods awakened. But in Kult, the universe wasn't even real, and the underlying nightmare was the devastation of a gnostic demiurge that decided "fuck it" and left. 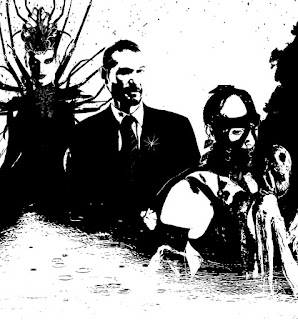 The only problem I forsee is the use of the Apocalypse World Engine to power the game. It's not the full engine....they are modding it heavily to get rid of much of the player agency built in to the design of the -World games, which seems like an odd choice because fans of the AW style game experience really tend to think freeform play and heavy player agency are key to their experience...Kult fosters the opposite, at least when it comes to player agency....this is something you take away in the kind of horror Kult creates.  Still, I get the feeling the designers (a gang of Swedish gamers for whom this is their first KS) like the action economy of DW and that's why they're going with it. (Atleast they didn't choose FATE....!)

No matter.....Kult makes a return (fingers crossed) and I will be there.
Posted by Doctor Futurity at 12:00 PM

Email ThisBlogThis!Share to TwitterShare to FacebookShare to Pinterest
Labels: kult