Tales from the Sea of Chirak I: What Has Come Before 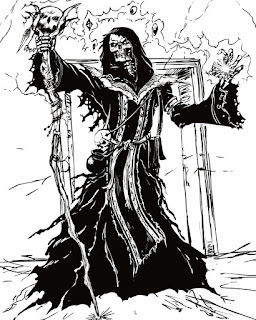 I had a lot of fun recounting the adventures of the White Star campaign, and while it is on pause as I prep for Season Two down the road, I have returned to an ongoing Realms of Chirak campaign in Dungeons & Dragons 5E that I've been running. This campaign started at level 1, and progressed to level 7 when we paused to play White Star. To briefly catch you up to the current storyline's events, here's a quick rundown of what's been going on:

The group started as caravan guards escorting merchant to the barony of Ducher in the heart of the central Espanean Mountains. There they found work for the baron in locating local goblin and hobgoblin brigands, and also as a side quest to find a missing paladin named Tristan Amphaere. Their quest to stop the brigands took them to the Ruins of Old Kell, a lost dwarven colony that perished two centuries ago, and the entrance to the old dwarven citadel that was once ruled by King Dyson, which had long since been gutted and turned into a warren of monsters called Dyson's Delve (Plug! Get the book!)

After exploring all of Dyson's Delve the group ran into an organized orcish force led by an orc witch named Saegras, who had the paladin in captivity. She gave him back along with a reliquary to Akquinarios he had stolen from the temple, and ordered them to send a message to the Temple of Kalie'Yana that she would not suffer any incursions into her mountains, and that the orcs would claim the land once more. On returning to the barony they were asked by the baron to travel to the regional capital of Corlione and report on the amassing orcish forces, the witch's message, and return the paladin who was suffering some serious PTSD.

The goup had a interesting river trip to Corlione, and in the city became embroiled in a bit of politics before attracting the eye of Spymaster Kargan Thas, who hired them to journey aboard a ship called the "Musky Merman" under a privateer named Katarina Danzante, a mixed-blood Espanean-Grelmanic pirate currently in "good" standing with Espanea. Their goal: to determine what cargo she is carrying to a mysterious location called The Secret City, sometimes known as Hathar, other times as Khorusan.

The ship journey was fraught with various dangers and in a very long tale rendered short the group ended up with a rickety abandoned ship, skeleton crew, and cargo brought in to the subterranean city of Khorusan at the center of a monster-infested island called Isla Esrosania. Here they found a subterranean water passage to a hidden grotto beneath the island where an ancient city had been turned into a pirate haven. The city itself was now dominated by three factions: the pirate coucil, the lich king Malenkin who had recently arrived with his army of the dead, and a group of ancient, immortal alchemists.

In an even longer tale of crazy the group got embroiled in rescuing a man named Nehenac, held by the alchemists and wanted by everyone else because he is apparently the last immortal empire of the lost realm of Xaxican. They escaped with him on their leaky boat, but not before the Lich King Malenkin sent a magically conjured storm after them...and that is where the tale begins as we pick up "Season Two" of this campaign....next blog!
Posted by Doctor Futurity at 6:00 AM