Tales from the Sea of Chirak II: Have Ship, will Wreck The kickoff session was short (a bit under 3 hours) and missing a full crew, but still, we got some gaming in. Yay!

Our group currently consists of a mixed bag of NPC sailors, some PCs missing the "P" part due to various vacations and absences, and three regulars:

Tia, an elven cleric of Kalie'Yana
Ungarak, a half-orc paladin dedicate to the Cult of the Forgotten Gods
Navira, a wayward human wizard and popular aristocrat of Corlione

The crew recently fled Isla Esrosania, a monster-haunted island with a dark secret and an ancient city of evil buried beneath it's volcanic peaks. More about that in a companion piece....for now, they are trying to escape on a leaky, abandoned merchant's ship they had salvaged, with a man named Nehenac that they rescued. Nehenac claims to be the immortal last Emperor of ancient Xaxican, held for centuries in the ancient city against his will by a cult of immortal alchemists who used the blood of his family line to create the elixirs of longevity that gave the Masirian elite their long lives. He's kind of a big deal to the powers that control Isla Esrosania right now....including the self-proclaimed lich king Malenkin.

The ship was assailed by a magical storm summoned by Malenkin and ultimately came apart under the constant battery. The group survived the ship sinking, thanks to water walking spells and water breathing potions on hand, but killer whales arrive to mop up drowning sailors. In a brutal fight the group clears out the whales and manages to save roughly 10 sailors, including absent PCs on auto-pilot right now. During the fight Nahenac helps, but his attack appears to be a necrotic life-draining strike with his bare hands...

As the storms die down, the group is left resting on a large chunk of debris from the shattered vessel. Out of the dark and fog a black ship crewed by skeletal minions of Malenkin, captained by the death knight Vas Kanadar, whom the group has met and fought previously in the subterranean city of Khorusan. Kanadar sails close, guns trained on the hapless crew, telling them that if they hand over Nehenac they will all live. The group scoffs and prepares to fight, but abruptly another ship arrives and attacks...it's hard to make out what colors it's flying in the dark.

Tia conjured a whirlpool at the rudder area of the death knight's ship, to aid in restraining its movement against the attacker. The death knight dispatches three wraiths to deal with the crew, and focuses fire on the attacking ship. In the fight that ensues the ship never makes a successful save to break free of the whirlpool and the larger warship slowly blows it to pieces. A lucky strike from the skeleton ship ignites the gun powder reserves on the attacking vessel and blows it sky-high, but not before the crippled vessel is ripped into the whirlpool.

Tia. Ungarak and Navira with Nahenac fight the wraiths.....two are turned by Tia and flee, only to get caught in the cross-fire of the vessels. The last wraith is dispatched by Ungarak, who wields an ancient weapon called the Assassin Axe (an axe of returning). The death knight, before his ship goes down, fires an orb of abyssal fire at the crew to get his last revenge, but they survive. The whirlpool takes Vas Kanadar but no one thinks he is dead.

The crew notice two lifeboats fleeing the debris of the other ship, and hail them using light magic. The other ship was the Espanean Naval vessel "Furious Wrath" captained by Nikolo Antares of Port Dunnare, another Espanean city along the northern coast. He takes the survivors of the PCs and their henchmen sailors on with his surving men, and attempt to navigate south to shore.

Antares suspects the PCs were more than unfortunate merchants but does get out of them that they work for Kargan Thas (who is a bit like "Q" from James Bond in his role and reputation) and is satisfied knowing that much.

A day and a half later the crew are approaching shore, and from a remote town along the coast fishermen row out to aid in the rescue (the survivors on the two lifeboats had no fresh water, so it was starting to get unpleasant).  The sailors escort the survivors to the small bay of the town of Kataspar, a remote location isolated from most Espanean sea and overland trade routes.

The people are stand-offish and appear to wish the soldiers to recover and be on their way quickly. The group notices that the fisherman and locals have odd accents, and Navira identifies that they seem to speak with a mix of old Masirian and modern Espanean words....Nehenac determines that he thinks they are descended from the Masirian slaves who built the island fortress of the alchemists which held him captive.

The group also identifies a local temple, a one-story affair at a bluff overlooking the bay, with a single forty-foot black spire jutting from the building. Locals won't name the god or spirit the temple is dedicated to, calling him only "The Clawed One," or "He of the Many Forms." Ungarak and Tia both know those terms to be hidden references to the demiurge Piscrael, a known cult risk in the north of Espanea. Still....they decide to leave enough alone for now.

The group spends time at a local tavern and inn with a weird "sign" in the form of a live jungle troll head suspended just high enough over a brazier of hot coals to keep its regeneration in check. The sailors get a bit rowdy with some local serving maids and the group puts them in their place. They search out gossip, and try to aid the currently coinless captain Antares in securing passage for his men west to Dunnare to report in.

While poking about Navira overhears some fishermen at the end of the day warning they lost another to an attack of merrows. The merrows are acting hostile and the group doesn't know why....they are angry with the priest of the local temple, claiming that the offerings he provided to the "undercity" should be enough to appease the merrow. Hmmmm....

That night they relay concerns to Captain Antares and get some shut eye. In the middle of the night, Ungarak is awakened by noise, and outside his shutters he witnesses a strange bonfire at the top of the bluff behind the temple, where dozens of villagers are mingling with weird, hulking forms that are hard to identify. They dance and chant, and suddenly a multi-headded image materializes in the bonfire, and all collapse in tremors and shouts. The image is hard to make out but looks vile. It says something impossible to discern and then extinguishes....the crowd disperses, but the hulking forms lurch into the dark at the height of the bluff and Ungarak hears their splashes as they dive in to the bay.... 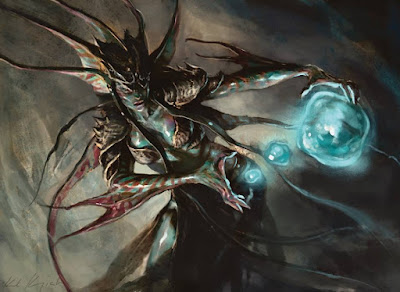