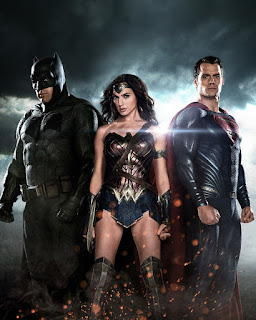 In fair disclosure I have been a DC Comics fan --and specifically a Batman fan-- longer than I've been in to D&D, Star Wars* or even cowboys and World War II. I was pretty much Batman for most of age 4 (and occasionally Underdog, but that didn't quite take), wearing mask and cape constantly, I have been told. I jumped formally into DC Comics (moving away from Marvel) after the Crisis on Infinite Earths....I was still an avid collector of DC and Marvel before then, but post-Crisis DC really captured me, and I never let up, collecting 90% of DC from around 1986 to 1990 when college and women started vying for my attention. I stayed a loyal DC fan well in to the nineties, splitting my time only with Image for a while. I gave it up somewhere in the early 00's but that had to do with life circumstances, and was much less a choice. I came back a few years ago, thanks to the New 52 and the sudden realization that I could do so once more....and I've been pretty dedicated ever since. New 52 was a good way for me to return, and I have always appreciated DC as a broad spectrum of tales and worlds; I hadn't exactly been married to some of the prior eras; all iterations of the DC Universe has its good and bad, in other words.

So when I say that watching Batman V. Superman - Dawn of Justice is probably about as close to a religious experience as I am likely to feel, please understand that I realize I have a bit of a bias. Much of this movie was like experiencing profound, deep entertainment about characters I've been closely attached to...characters that I never thought I'd see together outside of Youtube cosplay fanfic.

So....was BvS good for normal non-DC-obsessed humans? As a DC fanatic I absolutely say yes. This is the comics writ large, in a Earth 3 or Earth 4 (or something) not far off from the DC universe of the comics. It's an amazingly fun ride, and spends about 2 hours and 40-odd minutes working hard to build up A DC Universe films have never envisioned but which comics have been nurturing for nearly a century. It was....eerie and amazing to watch this movie. Much more so even than watching Avengers, if only because Avengers had a gentle slope of solo movies leading up to it, and it had a roster of heroes who had rarely been depicted in film before (and the few who had were done a great injustice).

DC and Warner Brothers have some big hurdles, though. The film carries on in director Zak Snyder's darker tone set by Man of Steel, and that's a tone that, despite Man of Steel and a trilogy of grim Batman films, is at odds with the prior, lighter and much campier Superman and Batman films of a prior era. At one time in the past DC dominated superhero films, and it was all with the tone considered appropriate for its time. This movie ditches that completely in favor of a tone much closer the contemporary films as well as a dark mirror of Miller's Dark Knight Returns. In fact, this movie owes a lot to Frank Miller as well as some other works (including the Doomsday/Death of Superman event, albeit a truncated and more palatable iteration).

So when I say that one's enjoyment of this movie will depend heavily on how you received the Man of Steel and the prior Batman trilogy (which is not part of this new cineverse other than setting tone) I am not kidding: if you didn't like the new Superman in MoS, you are not probably going to be happy with his version here.

As for Batman, he's amazing, and possibly one of the closest adaptations to the comic seen to date. Batman is shockingly well portrayed by Ben Affleck, who manages to completely own the role to the point where about 60% of this movie feels like a Batman film in its own right. He's a darker Batman, though, and one in a post Marvel cineverse where heroes may kill badguys on occasion, but aren't overly concerned about it. Odds are, if you're not a fan of a post-Reeves darker Superman, then when you see what the Batman in BvS gets up to you'll likely be a bit incensed.

I assure you, though, this is the first time any DC movie has tried to seriously portray these characters in a manner consistent with the "best" of the DC comics spectrum. It's really hard to beat.

Wonder Woman (Gal Gadot) is a secondary player in the film but gets some important screen time. Her appearance is great, and her tit-for-tat with Batman even better. She's much closer to the current, sword-wielding Wonder Woman, albeit with the addition of her immortality brought to the fore. I am really looking forward to her solo movie now.

The movie spends some time world-building very casually and cleverly when you're not expecting it. There's a lot of not-so-subtle hinting that Darkseid and Apokalypse is in the DC Cineverse's near future (probably the Justice League movie). One of the stranger scenes in the film even shows dog soldiers and para-demons on a bleak post-apokalyptic Earth in which Superman may have fallen to Darkseid's control (those scenes of a goggle-wearing, gun-toting Batman in the desert come from this sequence, which is less a dream and more a premonition). Other sequences hint at Wonder Woman's history in World War I, Batman's history in Gotham (what may be Robin's suit, defaced by the Joker, as well as a burnt out husk of Wayne Manor), and we get to see very brief and intriguing cameos of Flash, Cyborg, and Aquaman. There's even a Mother Box cameo. A Mother Box! On screen!

This movie had a lot of stuff in it. If they didn't need to so quickly make up for lost time in world-building they really could have cut about 40 minutes out and it would barely of scratched the core story. Despite that, it ripped along at a breakneck pace, and felt like they probably left another hour on the cutting room floor (or the recycle bin on the OS).

So what's there to complain about in this movie? I may be a DC fanboy but there are a few noteworthy items that I feel compelled to point out. First and biggest was the overt and gratuitous need for CGI in the film. The final fight sequence, while amazing, was also dark and this only emphasized how much of what we were watching was CGI (good CGI, but still). Some of the best shots were more reserved in the overt use of CGI, leading to (for example) the best Batman fight sequence yet seen on film, period. Other superhero movies have managed to pull this off to better effect, I feel...and I hate to say it, but staying away from night-time shots, and putting more color in to the film both would probably help to lessen the overt "in your face" feel of the CGI sequences here.

Batman's not shy when it comes to guns in this movie. Most of it makes sense (sniper rifle that fires tracking devices, or the grenade launcher he loads with kryponite-laden gas, for example), but Batman in the comics has an aversion to guns** which is profound, due to his childhood trauma....this Batman is more practical (and ultimately that's part of what draws the comparison to Miller's Batman). Still, early on he is shocked and horrified to witness Superman "saving" Metropolis from the Kryptonian invaders, trashing the city in the process....the view from the street in the movie was incredibly visceral and frightening, and Bruce Wayne being caught up in it was a great way to show just what a fight like that would feel like to the onlookers. Still, it set an expectation that got rather soundly walloped when Batman himself later careens through Gotham in a street chase that must have left more than a few thugs dead.

The movie also really made some core assumptions about its audience: at the very least it projects you in to the middle of an ongoing world, which is cool; but it definitely relies on the audience being of two minds: one would be the crowd that doesn't mind not knowing why Wayne manor is a torched ruin or why Superman was fighting in Metropolis at the beginning (if they didn't see Man of Steel). The other is the comic crowd that is eating up every detail and wondering what all the foreshadowing will lead to. Unfortunately I expect there will be a third group that is annoyed with all the intense but referential world building that either requires blind faith to understand or an encyclopedic familiarity the DC comics universe. These people will probably find the entire movie a bit frustrating.

I mean: seeing Batman figure out how to dodge being killed by Doomsday? Yeah, it was at that moment I realized that DC Comics can never, ever go back to the way it was before. Welcome --at last!-- to the future DC Cineverse. WB had better not flinch....this one needs to grow, big time. I can hold myself over on Marvel films, but pretty much all I want now is DC. We've got a good start....let's see if Suicide Squad can keep the momentum.

*I was dressing as Batman at age 4, and it would be another 2 years before Star Wars hit in 1977. Wooo way to date myself.

**Except for that part in the earliest issues of Detective Comics where he had no problem with guns, of course....or all the other times he uses guns (i.e. "rubber bullets, promise.")
Posted by Doctor Futurity at 11:56 PM