Tales from the Sea of Chirak III: Beware of Sleepy Portside Towns

I have no idea if these are entertaining to read or not, but I'm enjoying writing them because I have unexpectedly discovered that putting sessions into a recap narrative is really helping me as GM...much better than relying on my messy notes! So regardless of how exciting they are, I shall continue this practice.... 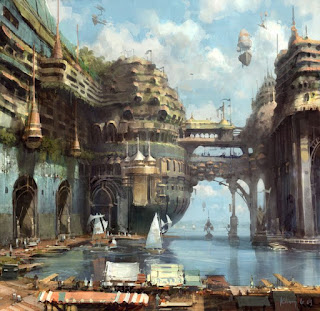 Last session Navira, Ungarak and Tia found themselves post-shipwreck in a quiet town called Kataspar, with the enigmatic Nehenac as their guest and the survivors of Captain Antare's ship in tow. In the middle of the night Ungarak awoke to see strange happenings up at the temple on the bluff overlooking the bay...

At the crack of dawn Ungarak awoke and roused his compatriots. They found the town quiet...too quiet...and a thick seaside fog had rolled in. There was evidence of something amiss....watery tracks in the inn's dining area, leading to (or from?) the kitchen, where the cook's dress and garb lay on the ground in a pool of water and seaweed. The tracks, strangely looked inhuman, and appeared to leave the building, heading out to sea....

The group investigates the town's dock area, while Captain Antares sends his sailors further in to find evidence of the locals. No one has any luck....it's as if they all transformed and walked in to the water. Suddenly, the group along the docks hears screams and shouts of murder from inland....at that moment Tia notices that the severed head of the jungle troll is missing from the entrance to the tavern (see last session!).....not good....!

The group rushes in to a cluster of houses and finds an 18 foot tall jungle/forest troll murdering sailors. They attack, and have a furious battle in which through mostly luck no one suffers a grievous wound (also, the paladin stands firm in taking the brunt of the attacks). The troll is at last destroyed and then thoroughly burned.

Around this time the Captain arrives with backup, and while investigating what happened, another sailor arrives, mentioning that he had gone to secure the river barge to prepare to leave, but the barge is now resting on the bottom of the bay floor.....because, it turns out, the tide is completely out.

The players had just been down there not minutes earlier, and realized something bad was happening....the tide going out like that, so quickly, could only mean a tsunami-style flood....they (and the NPCs) immediately ran for the highest ground, where the temple on the overlook was.

They arrived at the temple on the overlook in time to see a great wave and flood engulf the town and much of the coast for miles around. The barge they had planned to rent/pirate to reach Port Dunnare came untethered and was washed ashore deep in to town. No living souls in town, of course....but had there been, it would have been devastating.

In the weird temple, which Tia and Ungarak quickly identify as containing iconography and abyssal runes to the 113 Demon Gods and Piscrael, is an old temple caretaker.....and someone much more, they suspect. They also find a passage down  behind the old temple altar, with a barred gate to a steep staircase. The temple keeper tells them a story of how the town labors under a weird curse, and that the sea periodically tries to take the villagers for its own....but the temple and its gods keep them safe, transforming the villagers (how exactly he doesn't say) in to a form that insures they cannot be taken. He further says they are free to descend into the subterranean temple, where he claims many have taken refuge, or come to meditate on the spiritual offerings of the temple below. Navira has a bit of fun defacing some temple runes to distract the temple keeper.

The group decides to go down the stairs when the paladin hears the screams for help of a woman coming from below (Paladins! So predictable). They reach the bottom some two hundred feet below, opening in to another set of locked bars that the key opens...and evidence of much blood and a trail is found. They bypass the main hall and take a side passage to follow the blood trail, leading eventually to a refectory where three strangely acting acolytes of the temple suggest that they ought to be off, or at least properly going to the main temple first. The blood trail leads to another hall and a prayer chamber/room where a blood-drenched woman rests....a mirror in the room does not cast her reflection, and the group quickly finds themselves in a brutal fight with a vampire!!!

They defeat the vampire but now a temple priest/necromancer and a dozen acolytes have gathered to inquire as to their intent....they seem unperturbed by the "death" of the vampire...she was one of many, apparently, who are drawn to the temple to seek peace but who failed to find it. They advise the group should go to the temple and present themselves before the sacred pool of transformation, to see if the Vormiss will accept them....Navira uses some hefty charms to get the priest and his acolytes on her side in all this.

One of the acolytes turns out to be one of the missing sailors from Captain Antares' crew (they stayed topside, for the record). He has clearly been converted and brainwashed, possibly via magical means. Navira gets him to hand over his naval badge, as a proof they found him....but they decide to leave him be (to avoid a big fight, possibly).

The group ultimately decides to get out of here, retracing their steps, as they realize they might be in over their heads. They have a brief encounter with three minotaurs who are also dedicates to Piscrael or the mysterious Vormiss. They flee rather than fight.

Up top they run in to a gang of Kuo Toa who have taken the sailors and Captain Antares prisoner. More negotiation and charm effects later and the Kuo Toa hand over the captain and his men in exchange for pearls the PCs offer to buy them back. The group quickly leaves town, after confirming the flooding and tsunamis have stopped.

Back in town, the villagers have mysteriously reappeared, back from whatever transformation kept them safe. The villagers quickly help recover the barge amidst repairing the flooded town, and the bargemaster agrees to hastily get the foreigners on their way.

The journey takes a day and a half to get to Dunnare. Along the way they see muddy flats caused by the backwash from the flooding on the coast, witness giant ants in action, bypass an immense body of seaweed washed in that runs for miles, and have a brief encounter with a tentacled demon that claims they have all escaped the proper death of the sea, and so must pay....they manage to drive the demon off through a bit of clever bargaining.

The group at last arrives in Dunarre, a smaller port than Corlione, but with better defenses and an impressive Naval Shipyard in service to Espanea. The group quickly heads in different directions:

Ungarak finds the local temple of the forgotten gods and meets a priestess surprised to discover a paladin of her order is in town. He also notices the new temple, to the mysterious Hun'hunal, being built nearby.

Navira goes with Nehenac, finds the Royal Inn and prepares to enjoy a stay when she witnesses the minotaur Kargath, priest of Hun'hunal, being kicked out. She bribes the innkeeper to let him stay and then tries to figure out more details on who Kargath is....he's as much a troublemaker as a priest, it seems.

Tia finds the temple of Kalie'Yana, which pales in comparison to the Acropolis Temple in Corlione. She finds room and board as a priestess there, while fishing for information on where to go next. The news that is most interesting: no one locally knows what the recent tidal flood was caused by (no local volcanic eruptions or earthquakes to account for it), and it mostly damaged the portion of Dunnare built along the lower area of the river isthmus....most of this city is walled and fortified at high ground, specifically to avoid such tsunami-like floods.

More importantly: Tia finds out that a flotilla of Masirian ships are expected to arrive soon, as part of a diplomatic tour in which the Masirian royalty was invited by King Darego himself to come visit Espanea. Word of this reaches Nehenac, and the PCs spend time convincing him that vengeance against the descendants of those who imprisoned him now is not a good idea, but Nehenac is still seething with desire for revenge.