Did this come out last year? I've had it on blu-ray for a while now, but as is common for those with small children finding the time to actually watch a movie is a monumental feat. 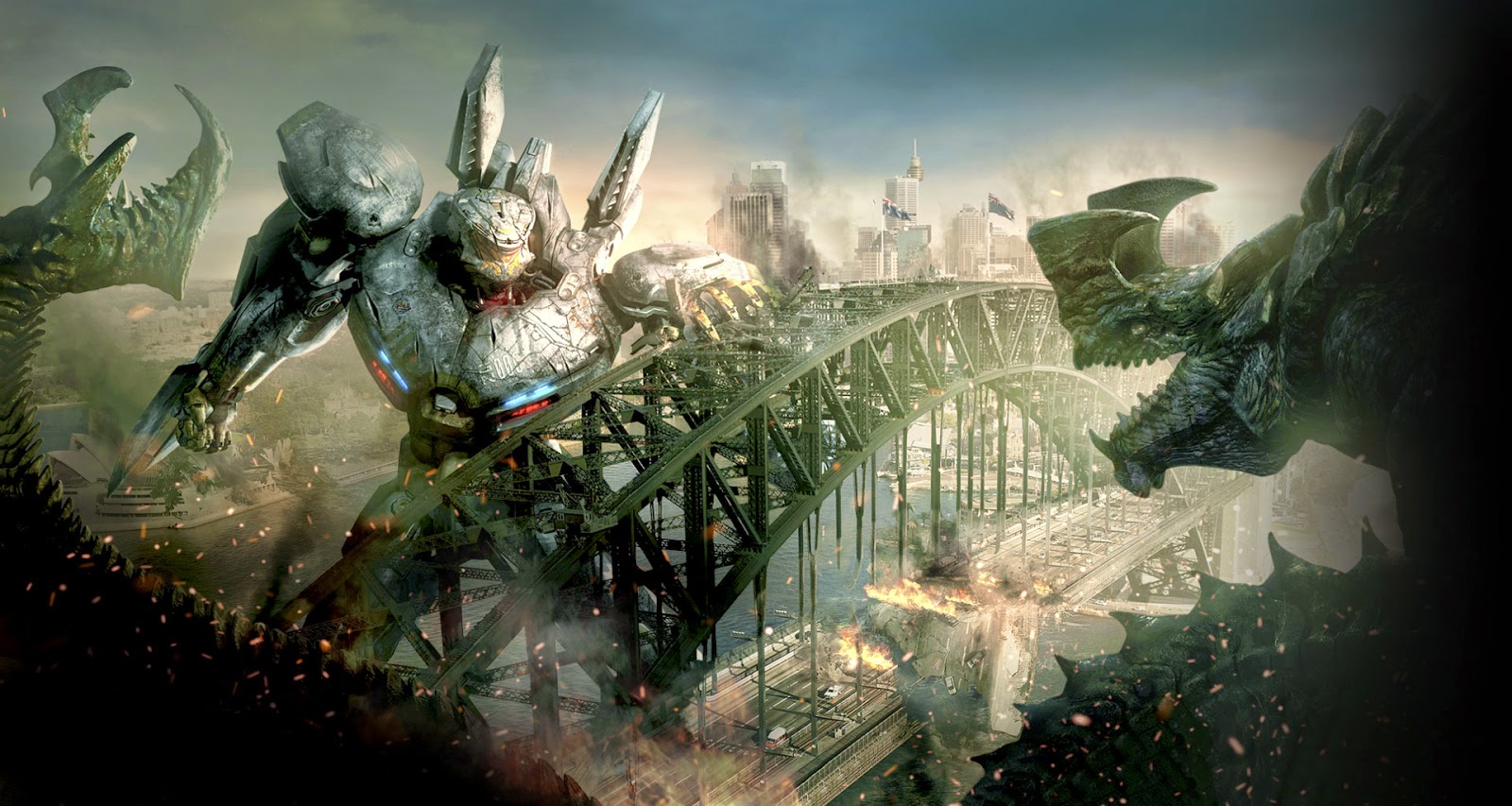 You probably know all about this one, so I'm going to cut to the chase: this is a movie about giant robots fighting to defend humanity from giant monsters (kaiju) emerging from a dimensional rift at the bottom of the Pacific Ocean. It is actually a sort of "actualization" of the mecha anime genre, and even tries to skew fairly close to its tropes and thematics, or at least as closely as it can while still going for modern CGI realism. This is both a strength and weakness of the film....it lacks a certain sense of "real world" feel to it while simultaneously portraying an amazingly detailed, fully realized giant robot and giant monster universe.

Rather than discuss the film in any general sense, I thought I'd raise a few bullet points of interest....a sort of list of things I liked ...and didn't like....about Pacific Rim. It was definitely a fun movie, no doubt about that. However, it was also very by-the-numbers. You've probably heard of the horrible, horrible secret that Hollywood's screenplays are pretty much all following one script these days (and they are...it's almost drinking game worthy). The screenwriter for Pacific Rim appears to have a general sense along these lines, too, it turns out....as this discussion of his process suggests. Watching the movie only provides further evidence of this....at least, I imagine, to veteran film aficionados, critics and avid film-goers.

Pacific Rim offers pretty much no surprises....it is so by the book that even when you barely have a frame of reference for why things are happening (as opposed to why they should be happening in a more sensible fashion) you still know exactly what is going to happen, who is going to live, who is going to die, and more or less why. The plot points in this movie are so derivative, so effortlessly paced without any effort to confuse or obfuscate the viewer into even suspecting they might go for an unusual twist or two, that even at its most exciting I was left with a sort of emotionless fascination. The sort of thing you might experience when you head downtown to a major metropolis, and gawk at the neon lights illuinating the skyscrapers (a common visual theme in Pacific Rim, I might add). Cool, amazing, even evocative, but ultimately just "there," existing without point of purpose.

Anyway, here's the list of things I noticed about this film:

1. All the robots seemed to have better attacks that they couldn't bother to execute right off the bat. Also, none of the robots struck me as being as effective as a hefty long-range military barrage. I suppose that you could argue that bombarding a kaiju while its beating up a city is a bad idea, but these jaeger robots do as much, perhaps even more damage than a aerial bomb drop would do.

2. The movie revels in larger than life characters...well, not quite. It revels in caricatures. There's nothing wrong with caricatures in a film, you often need a lot of them, and sometimes you need them to set the tone, which Pacific Rim definitely does. But the movie is all about intense levels of property damage and loss of life at the hands of immense invading extra-dimensional monsters while the world's defenses pour money into gloriously ineffective giant robots to combat them. This was hard for me to really soak....and that's weird. In a movie about all this awesomeness, I was having a hard time buying it. Hell....even the cities seemed to have marvelously intact infrastructure, despite the fact that one gets the impression that giant kaiju have been pounding away for decades now in battle. Sure, I could (sort of) accept that they had been more effective in battling the kaiju and protecting the cities, but the film's precedent at the start is that this is turning south. No one even bothers to call for a general evacuation in a world where they've known about kaiju attacks....almost like clockwork....for decades. Hell, no one even thinks, "Let's move the cities inland." There's just so much that depends on that special anime mecha sort of logic to keep it all together....and when it's made just realistic enough it fails for me, apparently.

3. Last thing: nuclear reactors do not melt down by exploding. Oh gods Hollywood I can't be the only one bugged by this.....PLEASE stop doing this. It makes no sense. Hell, call it an anti-matter reactor and I'd buy it more than yet another nuclear reactor going critical and then "blowing up." Arrgh. I know this shouldn't bother me in a film where mad scientists can interface with alien brains and a 100 foot tall robot can re-enter orbit after a even bigger kaiju flies up there to drop them off (as it dies messily).....only to apparently have enough force to slow its descent to something that doesn't leave half the city a smoking crater. It's not a movie that even pretends to give a rat's ass about the physics of it all, as most summer blockbusters these days tend toward. But "reactors overloading" and then blowing up in a nuclear firestorm still annoy me.

Maybe the jaeger reactors are like tiny perpetual exploding nuclear bombs, and the "reactor" harnesses the raw energy of each explosion. That makes about as much sense as any of the other fantasy future tech in this movie, I suppose. I guess I should just relax and assume it's a fantasy physics world, and not an effort at any sort of real SF.

4. Some reviewers liked the simple charm of the movie.....but there's a difference between simple charm and "tired and hackneyed." The reason the characters and plot didn't really work was because it was tired and hackneyed. The most interesting character in this movie was........hmmm. You know, I really don't think there was a single interesting character in this movie. Maybe the female pilot, if only because she was a fine choice for female lead, possibly one of the only interesting breaks from convention (i.e. she wasn't Megan Fox).

Okay, 'nuff of my ranting about Pacific Rim, part of the "reviews for parents who don't get out often" series. I give it a C+ for some great FX, and a competent but painfully by-the-numbers plot which desperately wanted to do more than it was allowed. Go watch Godzilla instead....it at least dispensed for the most part with the silly humans, using the "protagonist" entirely as a vessel for letting us bask in Godzilla's glory instead.
Posted by Doctor Futurity at 6:00 AM