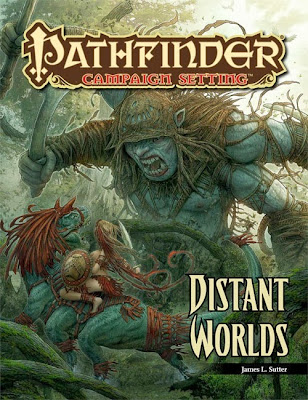 Continuing my review of Pathfinder books....since there appear to be about a million of them out there and hardly any reviews....I offer up another favorite of mine, Distant Worlds. This setting book focuses on the universe of Golarion, specifically the solar system and its inhabited worlds, as well as the means by which Golarion's extraterrestrial denizens and adventurers traverse the stellar expanse.

One could look at Distant Worlds as Pathfinder's dabbling in the world of Spelljammer, but that's not entirely accurate. Golarion's thematically aimed at the old pulps of the 30's, and unlike Spelljammer, which was built on a premise of "what if everything both quasi-scientific, mythic and fanciful that anyone, including the ancient Greeks such as Ptolemy, though about the way the universe worked was true?" The Pathfinder/Golarion take is more along the lines of, "What is the universe functions a bit more like an Edgar Rice Burrough's conception of space?" instead.

Most of the book is about the solar system of Golarion, with a breakdown and gazetteer of each solar body, including the sun itself, as well as other notable bodies such as Aballon, Verces, Eox, Apostae and more. The local planets of the Golarion solar system are all briefly presented with enough adventure hooks and detail to make for some compelling adventure ideas. You may have a hard time (as I do) figuring out how to easily extrapolate without porting the entire solar system over, or just giving up and running a campaign of world-exploration "as is." At the end of this section is a couple pages on other worlds, which is loaded with brief plot seeds and ideas.

The second chapter is Stellar Adventures, a short section (too short) on how to travel the stellar expanse, and some useful spells, ideas and environmental rules (i.e. vacuum), for traveling in space. This section needed about a dozen more pages, in my opinion, but what is here can serve as a useful springboard to crafting your own adventures. What is missing is actual statistics for stellar ships and different ways to model them in game rules.

Last is the chapter on Aliens, which features a short overview of beasts in the Bestiaries that might be found in the outlined setting of the sourcebook, along with new monsters, including the mechanoid-like Aballonians, gassy-world Brethedan, giant-floating-brain Contemplative of Ashok, dragonkin (looking a lot like actual dragons with a more humanoid gait), the Oma (space whales), and my favorites: the shobhad, four-armed giants (yes, yes) with dusky blue skin and lighting rifles who have an earned reputation for ferocity in battle.

For a Pathfinder fan who uses Golarion, and who has an interest in taking a campaign into space, this book is essential. If you're like me, and don't use Golarion but love the concept, this book offers roughly 13 pages of universal content and a lengthy section on Golarion's solar system that is worth reading for ideas, but works best when used as-is, in my opinion, perhaps as a location for your adventurers to traverse. It is not too difficult to lift the entire solar system and drop it in your own campaign, replacing Golarion's spot in the universe with your own world, if you so desire.

GMs looking for a campaign setting to use with a different game system will find that this book is largely system neutral, and can be readily utilized for campaigns in any other of the grand meta-family of D&D and it's relatives, clones and descendants. 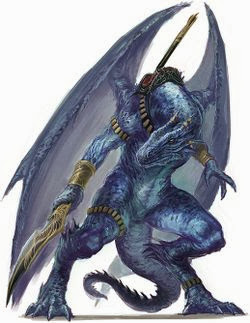