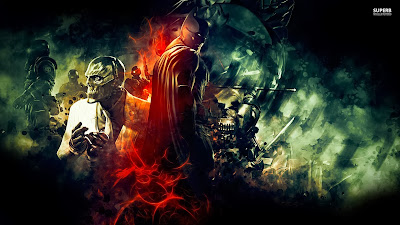 It could be just me, but as #3 in a trilogy of titles that do a fantastic job of encapsulating the Batman genre in a sandbox Arkham environment, I really get the sense that Arkham Origins hit it on the nose better than the other two games did. The presentation, the lead-in, the lack of any overly contrived reasons for why criminals roam the streets and make constant mayhem. Sorry, I am still having a hard time buying whatever passed for an explanation on the whole Arkham City detention walls dealie...even in the DC Universe's particularly turgid and wackiest moments the idea of walling off an entire section of a major metropolitan downtown area just seems....crazy extreme, even for a universe where no one can figure out Bruce Wayne is Batman.

Okay, despite all that, I think the plot of Arkham Origins has a strong "classic Batman" vibe going for it. This isn't a review really, since I've only begun playing the game, but more of an assertion that it has the right feel, the right mesh of exotic and previously underplayed villains (Deathstroke, Deadshot, Copperhead and more), and an excellent pacing. The plot is simple: mad crime lord Black Mask has it out for Batman, who is yet new to this city; it's a "Batman Year One" setting and we're only now about to see a Commissioner Gordon get promoted. Black Mask, in the midst of his reign of terror on the city, has hired eight deadly assassins to dispatch the Bat. Naturally somewhere in the midst of all this the Joker shows up, and things really take off then.

Anyway, more discussion soon I am sure as I play more...this game definitely grabbed me in a way Arkham City didn't, probably because everything so far feels like a plot and style ripped from a very well done Batman comic. For now, here's my tentative glowing thumbs up to the PC version of the first few hours of Arkham Origins.

Not sure how much blogging I'll get in this week, what with Xmas and all that.....but we shall see!