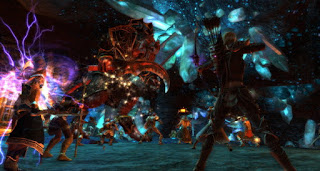 Rift officially went free to play on June 12th. I've been playing less and less of Rift in recent months, due largely to limited time, which is always going to favor "games that are fun" over "games that are making me grind." I have a low tolerance for slow progression, and Storm Legion, unfortunately, was laboriously slow. Despite buying into a year long sub at a good discount, I barely made it to level 51 on my warrior before my "I care" quotient was overhwhelmed by my "what the hell is this dragging on so long for?!?!" sense.

Still, I like Rift, and have dropped in periodically to keep up, albeit slowly. Hoping, of course, that sooner or later they would make the XP gain at high levels somewhat quicker, to accomodate more than just those mad, mad players who live and breathe MMOs and disdain the casuals like me.

Well, the new F2P model seems to have done just that: it has provided XP bonuses and potions to "patron accounts," which is a fancy new name for what a monthly subscriber is. It rewarded players by how long they had subscribed, with ongoing "loyalty" rewards for keeping with the game. I netted around 12,000 credits in the game, the currency used to buy stuff in the shop, something around $70-80's worth of currency. Additionally, the loyalty rewards dumped 23 gifts on me, in addition to a couple dozen dimension house items. Some of the gifts were useful (XP gain potions) and others were just plain cool (mounts and pets).

The prices in the game store range from the reasonable (a new character slot is about 600 credits) to absurd (3000+ for high end ten-level suits of armor). I don't have the store up so these aren't exact numbers, but they give you an idea of what to expect. The core of the game experience is entirely free, however; they are aiming to generate revenue entirely from extras, which is an interesting approach and I really think it's the smartest way that Trion could do this.

Given that I got so much loot on my many characters, and even after spending a couple thousand credits on cool mounts, wardrobe slots, and even an armor suit for one of my low level characters, I still have around 10,000 credits to use and I have to admit, it's very nice to feel like I got a proper reward for my 18+ months of dedication to this game. I've seen other conversions to F2P riddled with greed (cough >Age of Conan< cough >SWTOR< cough) and then there's the way Trion did it. Very smart. Sometimes...treating your players with respect will make you more money. I hope this pays off for them.

Whole game's F2P now, so no reason not to check it out. Population has exploded, and I don't mind since I get preferential status in queue as a patron player. Check it out! Jump on the faeblight RP shard, it's got lots of good people on it. 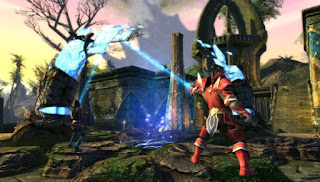