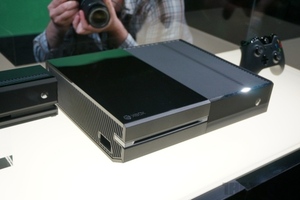 So Microsoft released more details on the XBone and it's not terribly reassuring for many people. Ars Technica has an overview on the new info here. In parsing out the new data, there are actually some decent features being pesented.....but they're modest and hard to appreciate in the wake of the other more draconian elements. Specifically:

1. You can have a family account with up to ten people on it. This is pretty neat actually, something Steam doesn't provide for on PC and something the current Xbox 360 only touches on with family accounts. On the other hand, I can pop a disk into my 360 and anyone can play it. In fact I am pretty sure the only limits right now are on DLC and XBLA downloads purchased on my account. Even Sony's PS4 is a bit more reasonable than that, allowing a certain number of current accounts to access my downloaded content (so my wife can play Demon Souls too, basically).

2. The phone in online-every twenty four hours or every hour at a friend's thing doesn't really bother me because I'm always online at home, but the friends part does because I like to drag my Xbox 360 to my friend's house once in a while for some Halo or Gears of War gaming and he's got occasional internet issues (also, he doesn't even have an Xbox Live account so we usually don't go online at all). The new Xbone doesn't favor this freedom. The loss of offline functionality for more than 24 hours is problematic for the two or three times a year that Comcast/Xfinity craps out, too. I've always been able to lean on the 360 in the past to fill those periods with gaming. Admittedly, that's not a big concern for me....I am not lacking for offline entertainment, I admit....but it's still a negative, another loss of freedom that Xbone's predecessor offered.

3. The used games issue isn't a deal breaker for me either, as I don't buy many used games. However, the key reason I will buy a used game is if I want to try it out but want to return the game should it prove to be a terrible experience, and Gamestop still offers that sort of return one week from date of purchase. I also happen to think that Microsoft's got lots of evidence on its own current XBLA store that they don't really plan on moving to a competitive digital sales model ala Steam, simply because they barely touch upon the concept now. Xbox Live weekly sales are occasionally cool, but 95% of the time most sales are "meh" at best and the typical cost of games on their current digital service are disproportionately high relative to the long-tail value of PC titles, for contrast. If you want even more compelling evidence that Microsoft has no interest in consumer-friendly pricing structures and sales look at the travesty that is the Games for Windows Live store. So in this regard I have to clearly state that Microsoft's demonstrated how it handles digital sales, and it's not pretty.

4. There's no upside best as I can tell to the always-on Kinect elements, and I'm going to show my paranoid colors here by stating that for every other issue with the Xbone, this is the one which kills it for me. Actually, the language Microsoft itself used is what's the deal breaker, as the curious covert double speak, suggesting that the Xbone can and will be recording if you don't specifically opt out, is a tacit implication that it can spy like this, and therefore one must assume at some point it will do so. Someone coined the phrase "Xbox1984" as a title for the new machine, and I think it's apt. Yes, they do state "we won't record you," but the fact that they then discuss "opting out" as a process you have to go through suggests the default setting for the machine is "we can record you if we want, unless you specifically tell us otherwise. And even then, who knows!" The level of detail the Kinect is capable of recording is even more disturbing.

At this point, literally the only reason I can see to purchase an Xbone is if I want to continue with the Halo franchise. Gears of War was a great series, I quite enjoyed it....but it was clear with Gears of War: Judgement that the franchise was done and had just released one more retread that I strongly suspect was intended originally to be a DLC content pack for GoW 3 before Cliffy left Epic. Meanwhile Halo 5 will have direct competition from its progenitors at Bungie with Destiny....which, of course, will also be on the PS4.

All Sony needs to do is announce a PS4 that operates in the same core model of digital sales and distribution as the PS3 currently, with continued support for used game sales and I think they've won this console war before the first machine is ever sold. We'll see. That...or Wii U needs to do some aggressive advertising and Nintendo needs to display a distinct uptick in the number of third party releases for its machine. However, if the PS4 jumps on the Xbone bandwagon and Wii U continues to look irrelevant....then I think PC gaming is going to dominate.