Eredoth and the Relic Kingdoms

This week: a return to Chirak proper, with details on the Relic Kingdoms of the far northeastern lands, east even of Xoxtocharit! This region of the campaign was first visited using 4E rules, but a return trip with Pathfinder is planned for the near future. 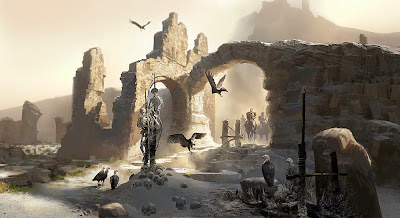 The Ancient History of Eredoth and the Relic Kingdoms

Eredoth is a land influenced by very old forces. Evidence of ancient ruins can be found throughout the ancient twin mountain ranges of the Anantes and the Frostmounts, but to most who dwell in this land the ruins are nothing more than a curious relic, a remnant of a lost age that may predate even the cataclysm that destroyed the old world. In fact, though few suspect it, these ruins are a hint of an even more ancient cataclysm, one which transpired eons before the event that very nearly destroyed the world twenty six hundred years ago. Though none suspect it, these ruins are relics from an era that even predates the concept of the gods of the Zodiac Stones.

The mystery of these ancients was already lost knowledge to the Occultic, Inadasir and Mythric Empires that were at the height of power during the Last Age, and so what little knowledge existed of this time was not passed down. Scholars in both Eredoth and Copan within the ancient city of Astananku have had more opportunities to study these ruins and relics than any ancient long-dead scholar of the Lost Age, in fact, for though they do not know it, their twin mountain ranges were forged in the turmoil of the Last War, thrust forth by the machinations of the betrayer gods as the stresses of the elemental chaos very nearly tore the world apart. Entire mountain ranges thrust up from the boiling depths of the earth, rupturing forth and dragging with them the ancient ruins of this lost age, exposing entire cities to the surface for the first time in a hundred thousand years.

Scholars who have studied these ruins call them the Nakal in Capac, meaning “Lost Ancestors,” while the scholars of Eredoth use the term “Klippath” which roughly means the “Impurities” or “evil spirits,” and stems from the Old Eredish word for Betrayer (specifically “The Betrayer” not just any betrayer).

Studies in both lands have led to some rather interesting differing interpretations of the originators of these ancient ruins. The Capac see the Nakal as an ancient race of prehumans who may have accidentally seeded the world with humanity and its other races. They feel that the first ancient gods were born of the union between the Nakal and the humans they created, and that to contain the terrible power of divinity within these mortals they gifted them with twelve sacred primordial stones, hewn from one great rock, which in turn served to house these first hybrid spirits.

In contrast, the scholars of Eredoth recognized that these ancient prehuman entities were malevolent, or at the very least may have created humanity as playthings. The scholar Nara’Pusin feels that there is evidence that the first men attained free will against the desire of their creators, and that they rose up in rebellion against the ancient Klippath, destroying their creators and seizing control of the twelve divine stones of power for themselves.

Of interesting noteworthiness is the manifestation in this land of the so-called Vestiges and the spirit saints. How these two beings relate to the rest is unknown, but both exhibit very old power, and appear to be capable of terrible and good acts alike.

The spirit-saints are seemingly created by a force given the appellation of the Divine Wind, mortals who are gifted temporarily with great power that eventually consumes their physical forms. These saints appear for a short while wandering the land and doing great deeds before eventually fading into mystery, and at last being extinguished by the primal force of this Divine Wind. It is so called because those few times it has been seen to manifest and a description has been recorded, the manifestation always appears in the form of a great gale or storm. Some have noted the similarity of this force to the worship of the two gods of Capac, Mataki and Hukil, who also manifest in like manner.

These spirit-saints change when touched, and attain supernatural senses and powers, but they rarely live more than two or three centuries before a transmogrification, in which their empowered soul sheds their physical body like an unwanted husk; such times when this has happened have led to a shedding of greatly destructive energy, as the dissipating soul irradiates all around it. No one knows what happens to the soul of a manifesting spirit-saint afterwards; all contact and even memory of them is lost, save for written records.

South of Eredoth in Nindragom there is a similar phenomenon, called the Mania by its followers. The Mania is a literal manifestation of crazed, maddening energy that both grants and takes life where it appears. Those who have witnessed a manifestation of the Mania say it is not unlike the same feeling of a manifestation of the Divine Wind, and some speculate it is related or even the same phenomena, merely augmented and manifest in a different manner. In any case, the Mania often changes those it touches, deforming them, imbuing them with infernal traits, or stripping them of all humanity; on rare occasions the Mania has drained the life force of an entire town or community, only to leave the dead to rise again. In Nindragom a cleric of the Mania is known as a Fate Dancer, and they are among a rare few who have managed to reach out, touch the Mania, and retain their mind while stealing some of its power. These Fate Dancers are regarded as powerful individuals, with terrible powers, but they are not revered as divine beings as the spirit saints are in Eredoth.

In Capac no such unique manifestations plague the land, but  instead they have two distinct deities that they revere, the aforementioned Mataki and Hukil. Mataki is the goddess of the sea, a benevolent undine of great power and wisdom who provides oracular visions to her followers. She is prized as the greatest of beings among the coastal cities of lowland Capac. Her counterpart, Hukil, is a vile god of capricious storms and death, and he is seen as her antithesis in every manner. He is feared by the mountainfolk and lowlanders equally, and some claim he is the Lord of Demons, though no one knows for sure if the western Xoxtocharit worship him among their own dark cults or not. Both are said to be the successors to the gods of the Lost Age, and that each claimed a Stone of Power (what the Capac call the Atzil, meaning the Divine Stones).

Though it is unknown in this land and abroad, there is a secret about these two gods. They are in fact the demiurges Kalie’yana (Mataki) and Piscrael (Hukil). To date, due primarily to the godless nature of the only western explorers and merchants to come to this land from Syrgia, no one has ever noticed the similarities in the iconography of worship for these two demiurges.

Aside from all these entities, there is one more source of ancient power in the land, one which is clearly tied to the ancient mystery of the Nakal/Klippath, but precisely how remains uncertain. These beings are almost certainly known to be dead gods, ancient ghostly remnants of whatever deities ruled the ancient relic empires of the Nakal/Klippath. There have been seven such vestiges discovered, and entire cults have risen up around the obsessive practice of communing with these lost gods.

The vestiges manifest almost as ghostly forces of will, sometimes possessing and altering willing hosts for brief moments of time. It has been observed by some (especially the renowned scholar Nara’Pusin) that this manifestation bears a similarity to what happens to those who are touched by the Divine Wind or the Mania, but usually with fewer consequences for witnesses around the event, and rarely if ever any permanent lasting effects on the host for the process. Nara’Pusin has argued, heretically to some, that the Mania and the Divine Wind might well be free-roaming ghosts of undiscovered vestiges for this reason. 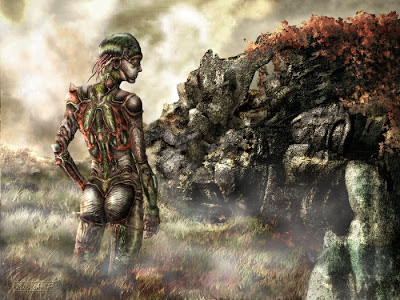 Next: Spirit Saints, Demon Gods, and Vestiges of Eredoth