It is entirely possible I am the only one who really cares about Resident Evil 6 today, although I imagine other RE fans like myself are possibly revisiting the game in the last weeks of June as the game's actual timeline places most of the big action during this period. A pity the cool BSAA phones everyone uses in the game aren't real! But I guess I'll accept not having holographic phones in this universe if it also means being safe from horrendous mutating viruses. 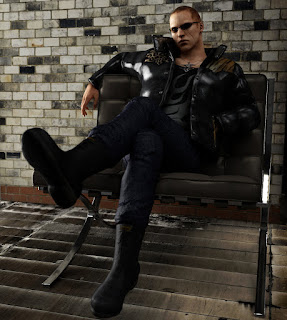 All of the following gameplay was on the PC edition of the game, which I jumped to after it was released. For the record, the PC version plays and feels much tighter than the Xbox 360 version, and looks better too. But we all knew that! It's a given, PC trumps console, hardly worth pointing out.

The Jake Muller campaign is the third of four campaign arcs that intertwine through the convoluted yet somehow simple Resident Evil 6 story line. Jake Muller is the illegitimate love child of the late Albert Wesker (last seen in RE 5 in the bottom of a volcano) and some unnamed woman of German or Austrian ancestry (if the last name is anything to go by). Jake is young blood in a game where the lead characters are all pushing 35 or older, at minimum (which means Leon and Chris are positively geriatric by Japanese RPG hero standards!) so presumably he and his companion Sherry Birkin (the little girl from RE 2) are destined to be primary heroes for the future of the RE universe...assuming Capcom doesn't get a wild burr up its ass and decide to reboot the franchise, which would be a silly decision in my opinion. The RE franchise works really well with history, and rebooting what has come before means chucking a load of amusing, interesting and occasionally disturbing and horrifying back-story, which can add plenty of grist for the mill to future entries in the franchise.

Since Capcom added an amateur hour difficulty setting to RE 6 title it's been a lot more fun to play and consequently the really wacko QTE events don't even stand out now because they barely exist as a thing for player's on Newb difficulty. As a result, I enjoyed the Jake campaign with almost zero stress and very few deaths; the hardest elements of the campaign were usually with screwing up on the "running away controls" for those moments when the massive brute-mutant Ustanak is chasing you. I could bump myself back up to normal difficulty for more of a challenge....but why bother? This game's control scheme is just wonky enough that there seem to be only two difficulties to start: "cakewalk," followed by "smash controller in rage at another senseless death caused by bad camera/control schemes with unavoidable deaths that can only be beaten through severe repetition" mode. They shorten that last mode's title to "normal" because it's hard to put all that on one icon to click.

But to summarize: read some other RE 6 reviews that mention the Jake Muller campaign. They usually complain about how painful the unarmed combat is, especially when you start meeting the rasklapanje for the first time. I can personally attest to the fact that the part in the Leon Kennedy campaign where you meet the rasklapanje (on normal mode) was insanely painful. Well, the good news is on easy difficulty the unarmed combat isn't just fun, its almost preferable to anything else, which is amusing since in easy mode you will never run out of ammo, and therefore fighting with unarmed style is purely an aesthetic choice.

Anyway, the Jake Muller campaign is all about a young, angry dude who's gotten into the privatized mercenary army lifestyle. He's on the wrong side this time, working with the J'avo in Serbia where Chris Redfield and other BSAA agents are basically at war with the terrorists. There's a lot of unspoken backstory in the RE 6 story, some of which you'll get to see if you persevere and find the mysterious serpent tokens hidden throughout the game. This is a huge flaw with the game; it should have liberally splashed endless notes, historical bits and dossiers all over the place for people to find rather than "gating" it behind hard-to-find tokens that allow you to access this info only when not actually playing. Some of this backstory revolves around various armed militias that have taken to securing bio-organic weaponry, which they in turn adopt in cult-like fashion to suffuse themselves with the stuff of super-soldiers (at least until they start mutating...) 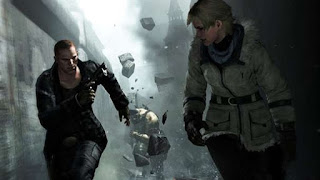 Jake's on the wrong side of this mess when in comes Sherry Birkin, who is now all grown up and working for the NSA as a special agent, after being raised and tutored by the dept. head Mr. Simmons (another factoid not revealed in the actual game but buried in a hard to find data bit). Sherry, who has some unusual healing properties thanks to her mad scientist father's tampering is looking for Jake, who has some weird immunities as well thanks to his genetic history. Apparently Wesker fooled around sometime after he first started treating himself to T-Virus injections (or was he up to the G-Virus by then?)

The rest of the Jake Muller campaign is a lengthy sequence of escapes and captures, with some interesting locations including an exotic Chinese mansion and a bunch of cross-overs with the Chris and Leon campaigns. By the time you get to the end, it's been a fun ride and nice to see how these two fit in to the story, but at the same time there weren't a lot of unanswered questions on the Jake/Sherry side of the story. A lingering sense of growing familiarity between the two characters is ever present, and I am sure it has spawned more than a little fanfic out there (not going to look, I just know this is how fanfic works; never mind the Leon/Chris/Jake fanfic I am sure is out there too! Or the rasklapanje/Jake/Chris....well, you get the idea), but whatever unholy spawn Sherry and Jake are capable of producing will probably be reserved for Resident Evil 12 in 2028.

There wasn't a lot to belly-ache about in this campaign. If you didn't feel like playing it you wouldn't miss much, but if you enjoyed Leon and Chris's campaigns, then you might as well jump into this one, too. It was fun, it didn't add much, but it still filled in some of the cracks in the RE 6 tale-at-large.

As an aside, I blew through a replay on easy mode for the Leon Kennedy campaign. Maybe it was because it was the PC version, and maybe it was because easy mode is really, really easy, but it was ridiculously easy this time around and took maybe five and half hours to complete (contrasted with 13+ hours on normal mode before). It was dramatically more enjoyable this time around, even though I found Leon's Dante-like descent into the Tall Oaks cemetery hill (a "hill" in name only, for this sucker is very deep and hollow) to be just as ludicrous as ever....but because the easy mode made it a fun ride instead of a digital stress test I actually had fun. While playing it though, I still felt that they needed to inject a great deal of story exposition into the game, somewhere....somehow. Allow the many hidden locked secrets to be found more easily and accessible in-game, for example. Have Mr. Simmons monologuing on a speaker in the catacombs or something, anything, to explain exactly what the hell he was thinking, contaminating so many corpses, then arming them with torches and dynamite. Never mind the zombie shark thing!

Next up is the Ada Wong campaign. This one, of all the above, should be most interesting because it is clear that there is some sort of convoluted hidden story in RE 6 about her feud with Simmons and how in the end it is thanks to her that everything goes to pot.

After that: a genuine return to survival horror in a manner indisputably Resident Evil-ish in the form of Resident Evil: Revelations! A game that proves Capcom doesn't need to spend massive amounts of cash on a hybrid zombie horror flick meets Die Hard film; all they need to do is take the team that made RE: Revelations and tell them "more of this, please." 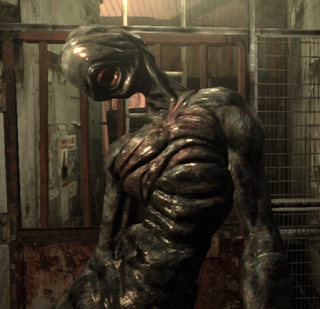