Spirits, Demons and Vestiges of Eredoth 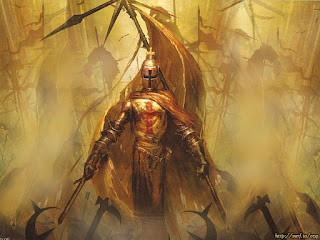 Known Spirit Saints of the Relic Kingdoms:
Sethrys, the Winter Queen, Lady of Monsters: This powerful woman has manifested a control over ice and cold in her domain, and now resides deep in the heart of the Frostmounts, ruling giants and other monstrous kin. She is a terrifying being, neither saintly nor spiritual, and seeks to conquer Eredoth one day, though her timetable of action is a mystery. She has been in existence for eighty years now, and it has been fifty years since she led an army of monsters northward to the capitol of Calladania in the Northern Duchies where she waged war for five years until the spirit-saint Augusteros rallied the soldiers of the land to drive her back.

Of those who doubt her “sainthood,” one need only talk to the giants, ogres, and other kin who call her such; she is regarded as a powerful force among the giantkin for unifying them into a kingdom of their own.

Augusteros, The Sword Saint: Augusteros is still known to walk the land, for as has been pointed out, if he had passed on then no memory of him would remain; he is considered the patron saint of soldiers, and bards have many stories to tell of his manifestation in times of need. He has been known of for more than a century now.

Killias, the Water Bringer: Killias was a young woman, touched by the Divine Wind while at sea, who changed to the form of a mermaid. She is now considered patron saint of sailors and of safe voyages in the Grey Sea. It is said that she considers herself a servant of Mataki.

Tarn, the Hunter: A rough old coot, Tarn was a ranger of the southern province and servant to king Emerad’s grandfather. He was fatally wounded in his old age while hunting, but the Divine Wind did not let him perish. He has not been seen in many years now, though on rare occasions in the woods some hunters claim to encounter him, continuing the hunt, and some starving families find game brought to their door by amysterious man they are certain is Tarn.

Miurnes, the Birth Giver: This patron saint of women and childbirth is said herself to have had a difficult birth and was about to die when the Divine Wind touched her, saving mother and child. Her daughter grew up to be the legendary sorceress Caedra, who dwells in her tower on the Isle of Saagarest. Miurnes appears at times to those women in need, acting as a mysterious midwife who assists in a difficult childbirth and then disappears after a child is born. 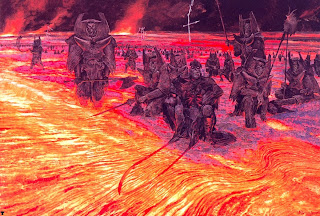 The Complication of the Yagoth and the Demon Gods of the West
The people of Eredoth do not just have saints to benefit from, for they also have very old demons that haunt their land. These beings are called the Yagoth, and there is no consensus as to where they come from. Common belief holds that the Yagoth are actually possessed beings inhabited by the spirits of the lost Klippath of the Relic Empire, twisted and shaped into monsters in body and soul by these ancient spirits, hungry for living flesh. A more heretical notion is that the Divine Wind itself creates them, and that it is not a benevolent force, but a natural force which must balance good and evil, and so for every spirit saint there must be a Yagoth. No one is sure what is true about these beings, other than their insatiable lust for cruelty and death. Only a very few witches and warlocks know that there are ancient obsidian mirrors that can be found in the Relic Empire ruins, capable of summoning the Yagoth, and that mortals are alarmingly susceptible to possession and transmogrification by these demons.

Yagoth are believed (rather terrifyingly) to be entirely unrelated to the so called Demon Gods of the west; most Eredish theologians believe, strongly, that the Demon Gods are malevolent apparitions that have confused the western empire of Xoxtocharit into believing that they are infernal beings of godlike power, for the notion that there may be a hundred or more evil gods in the world is almost too much for them to contemplate. Nindragom, not known for its scholars and theologians, nonetheless has a cult of battle clerics that pride themelves on their dedication to slaying the western cultists and mastering these demons, for they feel that the Xoxtocharit demons are merely another manifestation of the Mania, changing mortals into demons.

In truth, the Xoxtocharit have created a complicated hierarchy of belief and worship centered on the so called “servants of the betrayers,” which is a euphemism for the greatest servants and generals of the Betrayer Gods from the era of the Apocalypse, a period of time about which they know a great deal more than most scholars in the easterlands are aware of. Indeed, the memories of the apocalypse have all but been erased in the dominion of the Relic Empires, for reasons that are not at all obvious. 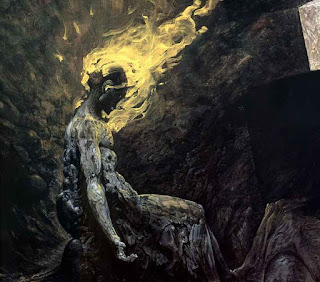 The Seven Known Vestiges
Of the many names and figures identified in the ancient script of the Relic Empire, only seven names have been determined to have divine significance, and as such these seven are believed to be the ancient gods of the lost Nakal/Klippath. Dubbed “vestiges” the first manifestation of a known vestige was caused by the tribe of elves once called the Ulithirians, and now called the Kaddam, which means “Shadows” in the Relic Script, they say. These elves followed the darkness of the endless passages of caverns in the Frostmounts until discovering an ancient city of the Relic Empire, still intact yet submerged in the mountains and somehow protected by a vast dome from the crushing rock above. Within this city was an ancient tomb to the dead god called Zaramast. The elves disturbed the vestige of Zaramast, and with its last power it changed them forever, altering the elves into the shadowy creatures of darkness that they now are. The elves were suffused with arcane knowledge from the shadow god, and have sought to appease and feed the vestige power through sacrifice, to learn more of its ancient secrets.

What follows is a summary of the known vestiges. All of the following have hidden cults throughout Eredoth, Capac and Nindragom, and some are openly worshipped among the Iargan barbarians. No one, not even their cultists, doubt that these are mere shadows of dead gods, whose power and lust for existence was so great that long after their power is gone, their bodies, slain and their souls either destroyed or reborn, these whispery shades of desire continue to exist.

The vestiges are well and truly dead, but the lingering essence of each shade is so powerful that they continue to influence the living a hundred thousand years later. Each of the above aspects can be invoked by those who know the secrets to communing with the vestiges, and extracting lost secrets and rituals from them. It is said, for example, that many orc sorcerers have learned to commune with Yazda Grahath, and from her have learned the secret of creating terrible birthing pools, out of which hideous monsters emerge. In northern Calladia, the powerful Sect of the Burning Sky have learned to commune with Emiridon, and in turn have drawn on this vestige to learn arcane secrets of the cosmos.

The vestiges are almost insanely dangerous. They can sustain moments of existence by stealing the life and souls of those who they are contacted by; failure to properly contain or ward against a summoned vestige can rapidly prove fatal, though luckily a vestige can only sustain itself from stealing the lives of the living, and then gaining only a few minutes of existence when it does so. Even the more benevolent vestiges find it almost impossible to resist the theft of others’ souls, though they may warn those around them when they are about to do harm.

Vestiges can manifest naturally adjacent to ancient ruins, especially in ruins that once contained great temples of worship to the old gods. On very rare occasion some seers and oracles can act to channel the dead minds of these beings, a more indirect (and sometimes safer) way of communing with them, though only those born with this unique gift can do so. 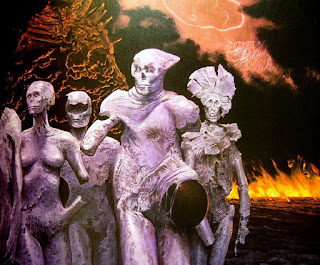 Next: Lost History
Posted by Doctor Futurity at 6:00 AM