The Many Faces of Old School 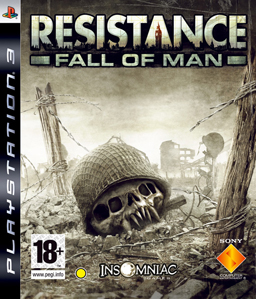 First, sorry for anyone checking in here for the OSR D&D movement....I'm capturing Old School as a term for video games today (yes, I've been on a bit of a game/tech bender for the last two weeks).

Specifically: the fascinating difference between Old School shooters and new school. Or, Call of Duty vs. almost every shooter prior to the arrival of Halo, if you like.

This started late on Tuesday night, as I tried to get through a few more levels of the Resistance: Fall of Man FPS quasi-military/survival horror shooter on the Playstation 3. I've been working on finishing all thirty levels of this game on normal difficulty since I acquired the PS3 back in February, and it's been a brutal slog all along the way, getting worse and worse with each new level. Last night, as my wife noticed my curses and spittle flying around the room after my fiftieth death in the 23rd level of the game (again, on NORMAL mode!) she observed that I seemed to be having something of a problem.

Specifically, a problem with repetitious dying....followed by finally getting the sequence right, only to move on to a new section, where I then died, only to restart back at the beginning of the prior sequence. Over, and Over, and Over. I wanted to crush the game disc. It was at this point that she asked me why I was subjecting myself to this...(keep in mind she was playing WoW as she asked, doing an instance that she knew so well she could close her eyes and pilot on through as the tank). 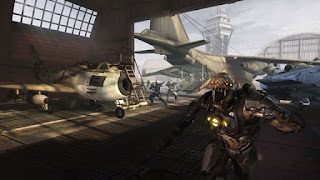 My only answer of course was because I wanted to experience Resistance's three games sequentially, but the truth was that long before I got to #2 I was going to get so irritated at #1 that I'd chuck it out the window and give up. I suddenly had an epiphany: I was playing a shooter released in 2006, built in an era when shooters were still different beasts. Halo had appeared, sure....but it's stink as a true game-changer had barely taken hold. Call of Duty 4: Modern Warfare was still a year from release when Resistance: Fall of Man came out. Suddenly, in this context the game made horrible, horrible sense. I was playing a title built from the ground up on the principles of the old school shooter. Yeow!

I was less of a video gamer back in the day. I still bought a metric ton of Playstation and Xbox games...I was a dedicated Dreamcaster fanboy for a while (until Sega crushed my gamer spirit) and I was there for the first year of Playstation 1. I owned a Nintendo 64 and a Sega Saturn, if only to play the two or three games each system had worth getting. Amidst all this I had a Mac computer for most of this period, and you know what that means: my gaming outlet was the console (except for Baldur's Gate). Despite all of this, I played video games far less often than I have in the last five or so years.

Despite all these games I'd buy, shooters were not high on my list of favorite titles. The awkward controls of survival horror and adventure titles didn't feel so awkward back then. Playing with pre-analog stick FPS titles was a chore, and even then the mentality of old school shooters was often aimed squarely at gruelling, grinding punishment; it was typical to play a level through eighty or one hundred times to get it right so you could make it to the next checkpoint (unless you were damned good at them) and so I often avoided games like Quake, Unreal, and the many, many console clones and derivates that existed out there in favor of games which were more controller-friendly. 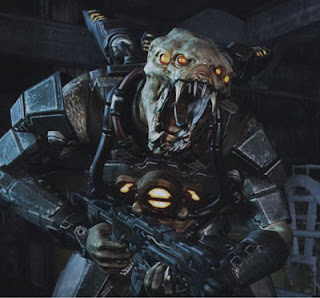 Controller issues aside, the old school shooter is a real thing. Many FPS fans either lament the end of the days when shooters put hair on your chest, and just as many (perhaps many, many more to go by per-unit sales of Call of Duty these days) cheered when they went away. Old school shooters were about being painfully tough, merciless and generally inimical to the personal enjoyment of the player. You usually played such games for bragging rights, or to be part of the elite club of gamers who could stomach the painful difficulty levels involved, all of which just prepped you for even more gruelling pvp. PC FPS fans were the most elite of all.

The point being, of course, story and enjoyment were often secondary to most of this old generation of shooter titles. The idea that a player could actually "relax" while playing a shooter? What madness!

So it was with this realization that I figured out I had been subjecting myself to a true old school shooter with Resistance: Fall of Man, perhaps even one of the last old school shooters to be produced, because by the time CoD4:MW showed up, I think the days of the nerve-wracking, painfully punishing shooter were about over. And with this realization, I figured out what I needed to do.

I searched Youtube, I found a guy crazy enough to play through to the end (on the hardest difficulty, too!) and record the whole thing. I spend about fifteen minutes watching someone else suffer through and show me what I was gridning through for. It was a huge relief that I "cheated" like this because let me tell you...the ending was not worth the agony of what that video displayed to me.

You know what was worth it, though? Putting away the Resistance 1 disc and popping in the Resistance 2 disc, to find a clever, structured graphically superior shooter with a modern set of mechanics for health, a "casual" mode for time-stressed older fathers, a cool story and a sense of pacing that did not punish you for looking away from the screen for two seconds. It was glorious! All the magnificent trappings of a shooter circa 2008. That was a good year for games, may I point out: Fallout 3 and Bioshock also arrived that year. I'll add Resistance 2 to the list.

I've heard they made some concessions for Resistance 3 to the old school fans who disliked how much of the old school was not in Resistance 2. I guess once I finish this magnificently better title I'll find out. I hope the concessions weren't too great...I rather like this brutal alternate history and would love to enjoy it without also feeling the nerve-jarring stress of a game designed to punish. 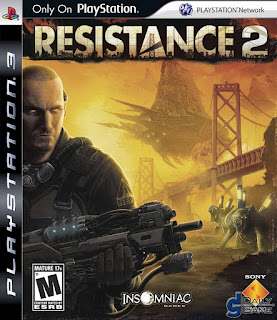