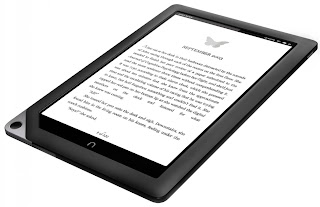 ...and so then did I, at the behest of my understanding wife, buy one. She thought about getting one as well, but it didn't seem to support all of the games she liked playing (yet).

I hadn't planned on upgrading my old Nook Tablet to a Nook HD+ until I heard about Barnes & Noble's decision to go open-platform (more or less) on the HD line with access to Google Play. Doing this instantly made the tablet more attractive. Knocking $120 off the price (I paid $179 for the 32GB Nook HD+ edition this Saturday) even for only a week was a great way to overcome consumer concerns about the long term viability of the Nook product. After all....even if B&N were to collapse, in theory it would still be a viable (albeit no longer updated) tablet with access to the Kindle App and all the other wonders of Google Play.

So I've had it one weekend now and here are my quick observations on what I already see as being an indispensable sixth sense---a third eye---to me:

Love the Size and the Resolution

The Nook HD+ is the larger style tablet, at a 9 inch display with better than 1080p (it's sold as 1080p but scales higher) resolution. For the first few hours I felt like I was managing a larger toy version of my Nexus 7. By day two the Nexus 7 and the old Nook Tablet looked like the toys and it was getting hard to remember how I survived on such a tiny screen. The resolution is stunning....as good or better than the Nexus 7, and it blows the old Nook Tablet out of the water. If you've only ever had a Nook Tablet (or older) this will shock you at how beautiful the resolution is.

I don't know if these games were optimized for larger screens, but games such as Need For Speed, Max Payne and Asphalt 7: Heat were suddenly much easier to control and play...in fact I'd all but given up on these games on the Nexus 7.

However, the HD+ is a dual core processor and not quite as impressive as the Tegra Quadcore in the Nexus 7. I saw that the Modern Combat series (3 and 4) were optmized for the HD+ so I downloaded MC4 to see how it compared to the copy on my Nexus 7. It ran fine, but I noticed that it felt ever so slightly more tasked than it was on the Nexus 7. A very minor observation, though; it still ran fine.

While the proprietary store for the Nook has more software available for the HD+ than older Nooks, it's still anemic compared to the Google Play store. Surprisingly few games on Google Play did not indicate compatibility on the Nook HD+....a few oddballs my wife likes, none of which were graphics-intensive, so I guess they haven't been optimized for the Nook HD+'s specific vagaries of design. A few more graphics-intensive games that run on the Nexus 7 (like Backstab) were not on the Nook HD+ options....yet. This thing runs Dead Trigger, Modern Combat 3 and 4, Need for Speed:MW and more without a hitch, so I suspect anything in the store that's not available for it will be soon enough.

Being able to buy from the Nook store, from Amazon Kindle App, Google Play Books or potentially any other number of retailers is a blessing. It may look bad for B&N on the surface, but guess what....their the ones with a tablet that will let you buy from the competition, meaning they out of necessity need to consider their pricing competitively. If you have a Kindle Fire, you're locked in to Amazon's prices (which are admittedly usually slightly better). I don't see a lot of incentive to buy from the Google Play store, though. It honestly feels like the place you buy books a few times here and there for those odd trips when you're bored, or want to have a book to read to impress other people....you know, non-readers. Kindle App and Nook Store are both much more robust and easier to search.

Holy Cow I can Read PDFs on this Easily

The Nook HD+ screen is big enough that looking at a full PDF page is perfectly feasible. The speed of the readers available is mixed, but you can download any number of PDF readers from Google Play to get the job done (I still favor Adobe). Although for Pathfinder books I still prefer to rely on Paizo's "Lite" reader editions, most other PDFs flowed great and searched fine. It's good enough that it may change my RPG purchasing habits, to lean more toward PDFs for some products, and print them out for actual use less.

Comics, on the other hand...

I still find comics and graphic novels to be a pain. Services like Marvel's Reader apps were less than stellar, shutting down without a wi-fi connection. The actual tactile experience of reading a comic in-hand is incomparable to wrestling with it on a screen, even a high res 9 inch screen. This could be a generational thing, though.

For the price I paid, the Nook HD+ was a seriously good deal. It's going to be my go-to  reader from here on out. I'll update if something changes (i.e. it explodes or otherwise does something unexpected and undesirable) but after one weekend with it I can't remember life on a smaller tablet screen. As for my Nook Tablet, I think I'll be retiring that one, and will look at refurishing it into a learning tablet for the kid. He's almost at the point where figuring out how to work a device like the Nook is more important than figuring out how to take it apart....as soon as we're past that threshold, I'll gift him the Tablet! 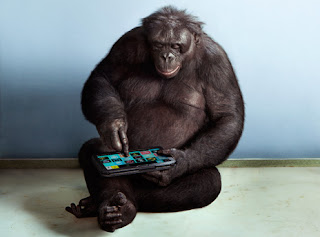 ADDENDUM: There's one bit I forgot to mention. The Nook HD+ uses its own proprietary plug-in for power/data, and is not at all compatible with the normal cables you expect for most tablets. In fact it's not even compatible with the older Nook Tablet cable. This does mean that, should you need to seek out a cable replacement, BN will be the only place to find it. If I do figure out that this style of cable is made elsewhere or has a third party version I'll let you know (or if you are familiar with it, let me know!)
Posted by Doctor Futurity at 6:00 AM