Here's two example characters I worked up for Earth AD 2, to give you a couple examples of how diverse the PCs can be in this game. I used a die rolling method for stats (roll D6s and re-roll 6s) and otherwise used the default point method.

Initially I rolled up some PCs with a range of skills. After testing the system a bit I realized that anything less than a 4 in a skill is a bad idea if you plan on succeeding occasionally, so I revised the characters accordingly.

The first example is a "mutt" or mutated human: 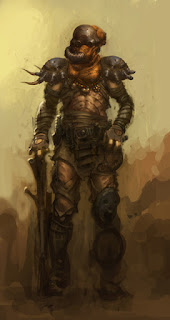 Background Details: Quron grew up in a village that thrived on salvage from a nearby ruin and live in mild opulence compared to other tribes. His disgusting form was overlooked for his unique ability to adapt to damage forms, as well as his talent for sensing enemy intent and seeing in the dark. Despite this, his issues with short term memory loss and seizures made him more suitable to guard the village than to venture in to the ruins….until the raiders with advanced weapons came, and torched his town! Now he wanders the wasteland with the spasmodic Speculos, looking for a new path in life…or revenge.

After Quron I worked out Speculos, the dude from my earlier combat example. Speculos is a "ripper" which is basically a robot with a human brain....a relic of the lost age who is somehow still functioning. In the rules you can spend 1 attribute point or 3 skill points to buy a gimmick...I opted to spend 3 skill points to equip him with a built in gun: 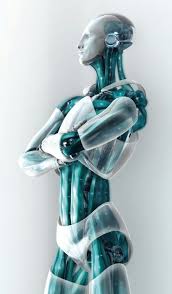 Background Details: Speculos doesn’t remember his real name, but he knows he’s been wandering the wastes for a long time. Some years ago after a run-in with scavengers his speech limiter was damaged and he now spends much of his time cursing and howling until ordered to reboot his speech modulator. He recently stumbled across the mutant Quron who was stumbling around in the wilderness looking for the raiders that destroyed his village. Quron has reluctantly taken to traveling with the human, whom he won’t admit he has taken a liking to.

Speculos is actually ancient, and his addled brain is filled with stories of the old world but the details are often viewed through a hazy fog of memories from a time when he was actually a living being and not just a brain in a robot body.
Posted by Doctor Futurity at 6:00 AM