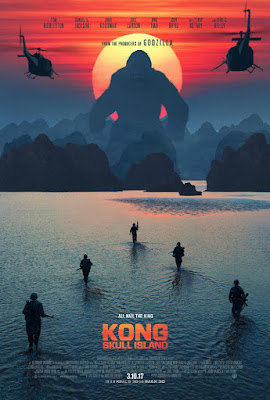 On occasion I will see a movie that I am pretty sure I am going to enjoy, even though I am certain I will be critical of it. Kong: Skull Island is exactly that sort of movie; fun in a precise, measured way which hearkens back to a very old tradition of fun B movies.

Spoilers ahead? I guess? If you've never watched B movies before?

The plot, if you haven't guessed it from the trailer, is pretty obvious: Several adventurous types played by prominent actors (including John Goodman and Samuel Jackson, who both have shades of Moby Dick and Heart of Darkness running through their characters) head off to a mysterious island in the Pacific Ocean which is surrounded by a perpetual, normally impenetrable storm. Of course the island is the eponymous Skull Island, where King Kong rules, and fights the timeless menace of ancient lizard-monsters from the Hollow Earth (yes, you heard that right). Antics ensue.

I don't have a lot negative to say about this movie, other than it has a good grasp on how to revive the classic B-Movie giant monster horror films of yore with the appropriate sense of adventure, fun, awe and (thanks to modern CGI) over-the-top crazy that does the kaiju genre so well. The movie itself managed to be more entertaining than it's direct predecessor Godzilla (which it turns out is retroactively the first film in a new cinematic giant monster universe franchise), and by the end (with an end-credits bonus scene) hints at pretty much all our old favorites returning, eventually.

The movie does a fine job of making a pulp adventure tale by the numbers, which the appropriate cast of characters: the complex protagonist (Hiddleston), the equally competent and uncompromising female lead (Larson), the menagerie of secondary characters that are ultimately either monster fodder or survivors depending on how sympathetic and/or fatalistic they are played, and one crazy survivor who brings the real and the levity all at once (played to the hilt by Reilly; without him this movie might have been a C average). Add in a period setting (1970's end-of-Vietnam) to help avoid messy questions involving why they aren't using modern equipment that would negate much of the questionable mystery of the island, an unfortunate initial encounter that strands everyone in hostile territory, mix with some appropriately Asiatic islanders (of the equally enigmatic...dare I say, exotic sort?) and you've got a classic mix which manages to surprise no one who has watched this sort of movie before, even as it impresses with some by now typically good CGI.

The movie has some fridge logic moments (well, maybe worse since I noticed them while watching the movie), such as questionable moments where they seem to somehow bypass a prior dangerous area on a return trip where it had previously been established there was no other way around, and While I didn't count total crashed helicopters (how many was that boat holding, anyway?) I kept feeling like there were more 'copters in this film than there really should have been. There's also a regular issue with water displacement and giant monsters; more correctly, they don't displace water, which is kind of weird, because honestly? When Kong jumps in the drink if the water level soared ten feet it would be kind of a neat moment.....but the CGI artists probably were just hoping we didn't notice.

Maybe the water pours in or is absorbed depending on the mass; a weird property of Skull Island. Like whatever explanation you can imagine for how a two hundred+ foot tall gorilla could exist without being crushed by his own weight.

It's weird to say this, but the movie was so utterly up to formula that it was simultaneously a load of fun and utterly predictable in a fashion which left me feeling like the best grade I could give this film was a solid B....as in B for "good B movie which understands its own tired and well-trod genre well enough to take the same formula and make it fun again for a bit." Nothing I saw in this movie was new, even for a second. But it was still fun, and kind of like I was once again in the seventies, watching a late night horror movie in black and white (but this time without a running commentary from robots!)

Now, that said: if you were looking for a collection of films to watch for inspiration with your next Savage Worlds game, especially if it's aimed squarely at the pulp genre, then this is an absolute must-see. It's not the greatest movie, but it absolutely is fun, and it really does capture the essence of pulpy giant monster flicks to a tee.

Plus, my kid LOVED this movie. Except for a few swear words and a couple minor "in the distance" dismemberment moments, this movie struck me as perfectly family friendly. It honestly was slightly less graphic than Jurassic World, to use another recent example.

I do look forward to seeing Ghidra, mothra, Rodan and Godzilla duke it out on some future "Monster Island" movie, though! Be sure to stick around for the after-credits scene for a bonus on where the giant monster film universe plans to go.

Solid B
Posted by Doctor Futurity at 6:00 AM