Key of all the lands in Enzada is Selindar, which is the uniting force both from an economic and cultural perspective of the Hub of Etyri. There are many cultures 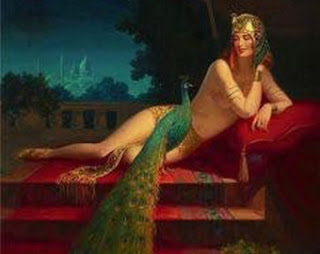 Selindar, the Free Cities
Ruler: Selindar sees its ruler as the chosen high priestess of the Temple of Natyne; each city then has an appointed regent king (called a kishatrya) who rules locally. The current high priestess is Erinsada Dimanes, a thirty-year-old woman who was a priestess of the goddess Natyne before she was elected to regency one year ago
Government: Republic with regent by election once every ten years; power is in the hands of the land owners and merchants, who elect senators from each free city in the realm to represent their interests in the senate halls at Uralhat
Primary Populace: mostly humans, with some egleppi, kobolds, goblins, Tengu and centaurs. Wild daharesh elves dwell in the forests of Nyr’T’Hathys in small enclaves, and some duwende dwarves dwell in the Shenguri Mountains. Sarnatha are rife in the region, but mostly in the cavernous depths of the mountains and the limestone caverns along the great coast; they like it dark.
Background: Selindar is a unique polity, a land ruled by no single king, though a regent is elected once ever ten years to act as the voice of the people in the senate. This regent is allowed to appoint a warlord who serves as general of the armies which serve to protect Uralhat and to aid the defense of the other cities and towns of the land. The actual rulership of Selindar is in the hands of the grand senate, which is a collection of wealthy land owners and merchants who are elected by their peers to serve the senate.
Selindar has an ancient history, but it was long ago emancipated from any conquerors, and whether it is true or not, the people of this land claim to be descended from the rebellious slaves who revolted against the long lost Inhuridan Empire. Admittedly, n the centuries that Selindar has grown as a realm of free trade, less than half the local population can claim to be native

A Note about Ranks in Selindar:

Nobles of Selindar are called the Sardar .
Men of station such as governors and merchant princes are titled Pasha.
Ruling women are the Sahbanu.
Regional kings and regents are the Kishatrya.
The High Regent of Uralhat is the Padishah.
Baba is the term for a revered wise man, saint or prestigious religious man.
Akhoond is the title of a proper priest or cleric of a specific clergy.


Priests of all types are typically identified as Pujari, and sometimes as Archaka. 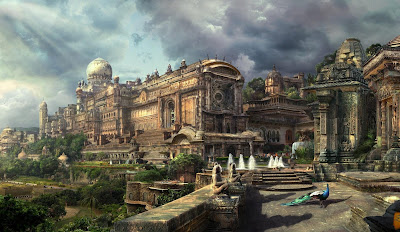 Uralhat
Uralhat is the majestic jewel of Selindar and the capitol city where in the senate holds conference and the regent elect serves her decade of service. It is the largest city in the Hub of Etyri, and it is a bastion of all cultures as well as the freedom-minded Selindari. More about the city will be discussed later, but it is home to over 250,000 residents, and twice that in the rural lands around it. Uralhat has been coveted by more than one would be conqueror, and it is well defended against sieges from both land and sea. The city itself is elevated in most regions on a multi-tiered plateau, a vast network of tell mounts reflecting the fact that the city has been built on more than five thousand years of continuous occupation.
Adventure Seed: The Theft of the Sacred Soul
A great congregation is being held in Uralhat as Teritis, the oracle of the goddess Enlinzade has decreed that the immortal soul of the goddess she soon be passed on to his legitimate heir. The adventurers witness the rite of Visions at the Sacred Pool of the goddess in the temple district. The spirit of the goddess, to be transported to the isle of Syrhaba where its new bearer in the form of the boy-priest Sinmir awaits is interrupted when demons boil forth from the Beyond and strike the oracle down…the oracle places the spirit within one of the heroes who witness the act before passing away!

A Quick overview of Uralhat:

Uralhat is divided in to eight regions, which include the following:

The Shanty
--A vast uncultured slum, “The Maze”
--Temple of Chashar
--Thieve’s Guilds
--The Assassins of the Red God
--The Cult of the Grasping Claw
--Scurvy Taverns
--The Gambling District

The Temple District
--The Heart of the Thousand Gods
--Temple of Natyne is largest
--Temple of Etyri second largest
--A solitary shrine to the Blood God Thorzos, said to be haunted
--Temple and Monastery to Yazda for Sword Saints (Paladins, Rangers and Monks) of Yazda

Alesar and Carodon
These are two noteworthy ports of call, small cities along the coast of Selindar, and strong bastions or regional influence. Both are known for their local agriculture and woodworking, though the fishing trade is also very important. Neither prospers as a port due to inadequate harbors.

Nyr’T’Hathys Forest
This forest isn’t just a forest…it’s a true jungle. The equator of Enzada runs right through this region (scholars and navigators can tell you that Uralhat lies right along it, in fact) and this is easily one of the hottest jungles in the world. As a result, most of the civilized folk stick to the coastlands and the mountains, but the daharesh, egleppi and many other denizens suited to such a warm, humid environment, as well as a dozen known aboriginal tribes who have cast off the yoke of civilization can be found scattered throughout this thick rain forest.

The daharesh of this land come in three varieties, including those who dwell in primitive communities and seek out the elegance of nature as their muse, called the Kindari, the fierce darker skinned darahesh who inhabit lost Inhuridan ruins of old and seek to dominate the subterranean races called the Zhakil, and the somewhat more graceful Hyadari who actually live in the lower reaches of the Shenguri Mountains in impressive, ancient cities that blend seamlessly with the walls of the mountains.
The Halfolk in this region are the stout, lean dark-skinned kin called the Uthitin, and they see themselves as the caretakers of the forest. They have the largest number of villages close to Uralhat, and they are known for their society of explorers and hunters who call themselves wayfinders.

Chassa
This trade city is located at a high elevation in the sole defensible pass over the Shenguri Mountains. The Road of Commerce passes through here, and links Selindar with the rest of the lands. Chassa is protected by a well known general named Karigos Shantigan, an exiled Nipar warlord who fell deeply in love with a Selindari woman named Esiir, who is a dedicate to Mimbrata, and she convinced him to leave his people and march south, where he occupied Chassa and swore to defend it against any who would stand against the liberties of Selindar.

Skadris
Skadris is a mountain city dominated by more nonhumans then normal men, with a healthy mix of daharesh, netherim, duwende, Tengu and more. There is a great deal of duwende mining in the region, and the city is a sight to behold. Atop the Peak of Sketsar, highest of the Shenguri Mountains is a massive temple to the god Drod.

Zalfarvan Caverns
These immense caverns are the centerpiece of the underworld community, managing to be a dangerous and prosperous place all at once. The complex is dominated by four major powers, being the zhakil, sarnatha, draconians and hideous monsters.

Vanzarik Ocean
The Vanzarik Ocean is the great expanse upon which trade with the north coast of Dasam and the east coast of Merille trade. There is a hearty seafolk who are called the Vanzarik Islanders that ply the ocean, said by some to never leave its many islands and their boats. The people of these many islands are insular culturally, but open to trade. They worship a set of deities known collectively as the Diwata. The Diwata are a large collection of elemental nature spirits that are revered like gods by the locals. The Vanzarik Islaes are also the original home of the duwende, the stout hairy dwarves which migrated to the mainland and can be found throughout Selindar and the eastern Zalfarvan Mountains.

Syrhaba
Syrhaba and the Islands of the Burning Sun are a pleasant locale where mystical temples have been built over countless centuries…..one island is described as the Isle of the Thousand Gods, where a thousand shrines to ancient and new gods can be found. Several monasteries of monks reside on these islands, and most local trade and commerce goes through the fine port of Syrhaba. This region is also famous for its meteoric iron.