Secrets of Enzada: The Sunken Temple of Vorkath

I have dozens of these on the hard drive, in note books, stuffed in folders.....instant mini adventures for that right moment: 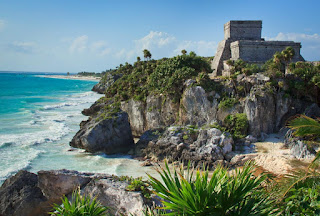 The Sunken Temple of Vorkath

The Ruined Expanse Juts from the water off the shore of Southern Erasmar, looming over the beach like a dark and dreadful shadow.

Encounter 1: The shoreline before the ancient ruinous temple just off the coast is guarded by three maddened albino apes. Unknown to the PCs, the maddened albino apes are the degenerate, transformed survivors of the last shipwreck to crash on the coast after a failed attempt to steal the treasure of the temple.

Encounter 2: the slippery steps of the ancient temple are a danger to traverse (Climb check DC 12 to avoid slipping and falling for 1D6 damage). Midway up, four harpies nesting at the top near the well-like entrance will fly out and then dive to attack. The harpies shriek "Blood for Vorkath!" as they attack and also appear to be mad with rage.

Encounter 3: At the top of the temple a heavy capstone can be found sealing the pit entrance to the temple. (two people must succeed at Strength (Athletics) rolls DC 15 to lift). The pit is deep and slippery, and a climb check DC 16 (advantage if using a rope) must be made to descend safely. If the task fails then the climber falls 1D6X5 feet (taking 1D10 damage per full 10 feet fallen).

Encounter 4: The deep heart of the temple is guarded by an ancient immortal minotaur, who will seek to take advantage of the darkness by attacking any light source/bearer first. The minotaur has maximum hit points, is resistant to non-magical weapons, is 1 CR greater than normal, and wields a great axe +1.

Encounter 5: The temple is loaded with gems and jewels, in the amount of 500 silver pieces and 1,600 copper pieces. There are four jewel-studded golden statues worth 100 GP each. The treasure is located in four basins, each a votive bowl to the enigmatic Vorkath. His statue in the darkened inner chamber appears to be of a great beast with the head of a bull, wings of an eagle, clawed talons, chest and arms of apes, and holding a trident. If any fail to offer a prayer of supplication or sacrifice (such as the minotaur's head; Religion check DC 18 to perform a proper ceremony) before taking the treasure a great storm will roll in outside, and the sea will rise to flood the temple and shatter the PC's ship (if they have one) against the island's rocky coast. 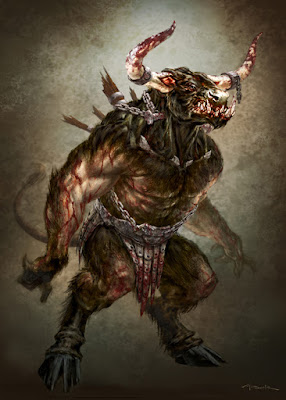