Secrets of Enzada: Theft of the Sacred Soul

In looking through interesting material for the blog I happened upon my original adventure in Enzada, using Pathfinder rules. If I revisited it I would rework for D&D 5E, but the original stands well on its own, complete with stat blocks for relevant NPCs.... 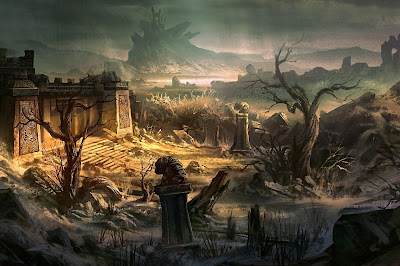 The Theft of the Sacred Soul
An Adventure Outline in Enzada

Plot: Lord Kharvanos has become obsessed with the mystical soul essence of the goddess Elinzada. He has decided that he desperately wants this soul essence for himself, and has conspired to steal it. For his first effort, he sought out a warlock named Makhek, a Waladari sorcerer of no small repute to aid him in the theft of the sacred soul by way of stealing its carrier, the sacred priest and bearer of the soul named Teritis .

First Effort: Makhek summons a number of demon spirits (undine shadows) to steal the holy one Teritis away, but his efforts are thwarted, when Teritis, a supreme pacifist, ensconces the soul in an NPC to preserve it based on a vision he had. His vision proves true, and so the soul is safe.

Mission: The PCs will be approached by a group of dedicated aristocrats who worship Elinzada, and ask that the possessed PC (who will be “outed” in an unusual healing incident after an accident) be taken to the sacred shrine of Syrhaba, where the displaced soul of the goddess can be conveyed to the intended successor, the holy one’s apprentice, a boy named Sinmir. They offer all the wealth they can muster for this task, which is 1,500 gold pieces, a masterwork long sword, a necklace of pure ivory worth 200 gold pieces, and a small stone idol of Elinzada that is imbued with the power to cast cure light wounds once per day.

Whether PCs take the mission or not, Kharvanos and his crew are still keen on acquiring the soul, and will plot to kidnap the PC next.

Traveling to Syrhaba
If the PCs prepare to embark on a journey to Syrhaba, they can find a swift schooner that will carry them across the channel over a two day trip to the port city of the Sunken Islands. Along the way, they will have two encounters:

1. Sahuaghin Attack
Kharvanos becomes aware through his informants that the PCs are on board a vessel. He hires sahuagin to attack, to secure the ship and the possessed PC until he can catch up to the vessel. One night, several sahuaghin will steal aboard the ship to murder the crew! There will be 4 that the PCs must face, though more in the raid fight the sailors.

2. Lacedon Stalker
A ghoul-Lacedon, a drowned pirate of Vanzarik descent named Shimadar and his two allies become aware of the holy spirit of Elinzada passing overhead. They will stalk the PCs and demand that the possessed one try to heal them; they think the spirit can cleanse them of the undeath that plagues their bodies, when they were taken for their poor choice in worshipping the Grasping Hand. They will fight to try and force the issue, if necessary.
In fact, the lacedons can be healed, after a manner of speaking; the first to be “cured”  will disintegrate, leaving a spectral soul-self who quickly slips “sideways” in to the Spaces Between….the others will panic and try escape then! The unbearable radiance of the transformation pains them, even though their converted brethren seems happy at last to pass on to a new life.

At Syrhaba
On Syrhaba, the PCs must pass through the rough port town carefully, for there are many rogues who aspire to steal the fortune of the priesthood of Elinzada, especially a magical healing spirit. They must then trek in to the mountain where they must find the ancient monastery of the goddess and present the spirit to her intended vessel. This will allow for its release. They will arrive, but only to find that Kharanos and his warlock, guards, and the warlock’s pet gorilla have followed them! Worse yet, they discover that the child has been stolen away by a huecuva named Xondar, a blasphemer priest of old who once betrayed the order. He dragged the child in to the old tombs of the monastery once he sensed that the high priest had been spirited away. He expects the PCs to pursue, and will then take the spirit for his own, or so his plan goes…

Encounters in the Tombs of the Temple of Elinzada:
Xondar, Huecuva priest (max HP, a wand of charm person w/13 charges and Bracers +1)
1 shadow servant
12 skeleton warriors
3 zombies (of priests who entered to recover the boy and were slain) 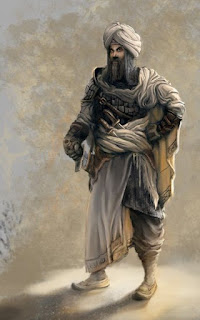 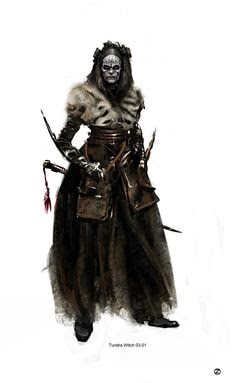 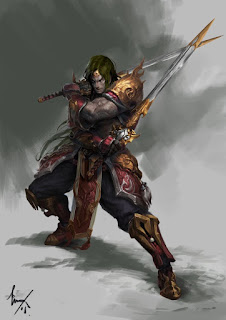 The Guard Narzik
This young but industrious man is a hired guard for the holy one, and will aid the PCs as best he can to find him and bring him to safety.