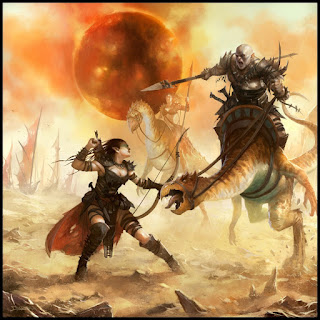 A recent post at rpg.net was asking this question about advice for the new Savage Worlds GM/referee, and after writing a response I decided this would make a great post for the blog, too.

I had issues with SW for many years and then one day the system finally "clicked" for me and I've been running it regularly for the last three-four years. Here are my suggestions:

Wild Cards are Special: Go easy on wild cards. Treat the "big boss" as a wild card, but take your time. The first time you do use a wild card, it should only be one wild card. Once you have a better sense of the system, you can start to experiment....but give yourself at least 3-5 games first.

The Cheat Sheet is Essential:  Make sure you and your players have a copy of the Savage Worlds combat cheat sheet, it will help them understand the combat nuances in SW that aren't typical of other games (and always remind them ganging up is a useful strategy)

Start in Modern/Future: I found that it was easier to start off with games where pistols and rifles were more common for combat initially; SW handles ranged combat beautifully. It is possible to start with fantasy, but I did try it that way and stalled rapidly because I didn't catch on to the problem of melee combat where combat rolls are close to parry defense, and damage rolls are close to toughness. One of the worst games in SW I experienced was a new GM running a fantasy game with heavy melee combat in which we were swarmed with 20+ skeletons and a couple wild cards. It was an excruciatingly long slog and no one knew what they were doing. The game would have been much more fun (I now understand) if he had just put in, say, 1 skeleton per party member and given us the opportunity to figure out tactical options with a smaller set of foes and no wild cards. Later I ran a game of space marines vs. mutants in SW and immediately noticed that most of the issues in that prior game evaporated with the joy of ranged combat, so I stuck to modern and future games for a good while before dabbling in lower powered melee.

Don't get me wrong: melee in SW is just fine, but the more essential process of melee combat gamers tend to be used to (stand there and trade blows) doesn't really work in SW. SW is best when it uses the dynamic elements of the system....including its tactical combat options (see that sheet I linked to) and bennies in surplus. Speaking of which....

Bennies are meant to be Spent: Encourage your PCs to use their bennies early and often. They can learn to horde them later on, but for the first few games, let them take advantage of bennies to keep them in the game, and offer a bonus bennie here and there for good deeds if that's what it takes to convince them this is a resource you want to deplete before the session is over.

GM Bennies are Special:  Even though a GM gets bennies, you should use them sparingly in your first few games, and in fact might find it easier to only use them when you are trying to make a wild card foe a major encounter. You are under no obligation to spend them, so I suggest saving them for those "really special fights" you want to make memorable (in a good way).

Don't Forget:  Remember: a regular monster/foe that is stunned twice is now wounded, and therefore out. I've seen more than a few new SW GMs forget this. Also, don't forget that +1D6 damage for getting a raise on the attack roll, and don't forget: DAMAGE DICE EXPLODE too!

Big Parry/Big Toughness No Nos: As mentioned earlier, remember that more "normal" foes are a better fight in a SW game than one or two high parry/high toughness foes. Avoid high parry and high toughness foes unless you know your PCs are high enough in rank, skill and firepower to make the fight interesting.

If you stick to these basics, you should find your first few Savage Worlds sessions provide a fine bed for learning the game. After that, as you get used to the nuances of the system, it will become increasingly intuitive and flexible, and you will find that the game provides hands-down some of the best multi-genre action adventure gaming you can get, period.
Posted by Doctor Futurity at 11:20 AM