My son is obsessed with Dungeon right now. The classic board game of my youth has a current version which is basically the same game with slightly fancier parts, and I taught it to him over the weekend. He was so into it that he got up the following morning and proceeded to play it "solo" which is rather to say he played a four way game with himself and his three favorite stuffed animals as co-players. Very meta! A player playing three players playing characters. 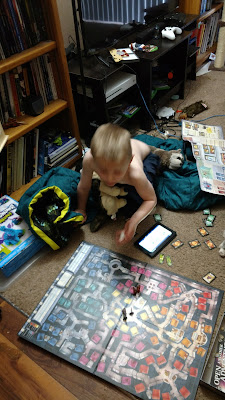 This was the game my sister and I played obsessively for months while the Dungeons & Dragons Basic game sat around waiting for us to figure it out. In the end it was Gamma World that "taught" me how to play an RPG, but Dungeon most definitely lay the groundwork. I was about ten when that happened, so my son is getting a five year head start on me, it looks like!

It was with some amusement that I realized that I couldn't even play Dungeon today without house ruling it a bit. For example:

The Kid Rules: don't make the kid do hard math (he can add dice fine; adding 10,000 GP worth of loot is a different matter entirely!) Each of his characters needed to find 3-5 treasures to win, for example.

The Cooperative Rules: you can play more than one character (he wanted to) and they can travel together as a group. This makes sense to me. I had never noticed until now that Dungeon is essentially about a dysfunctional group that immediately splits the party. Weird!

If you play two characters, they each get a turn fighting, but they have to choose which one gets the treasure. They have to earn as much treasure as both characters combined to win.

Cooperative Heroes: two players can also cooperate like above, but the one who rolls the highest damage roll wins the treasure too. Alternatively, they could choose to split the treasure by taking lesser treasures totalling the level value of the bigger treasure (so a level 6 treasure can be split as two level 3 treasures if there are cards for it).

If cooperative heroes want to move together, they can defer to the last hero in the turn sequence and all move on his turn, but only if they are adjacent to each other.

Cooperative Monsters: if you allow cooperative heroes, then monsters also work together. In chambers, instead of three consecutive monster encounters, you get all three monsters at once, working together.

Healing Clerics: once per game a cleric can choose to undo the damage roll of a monster if he so desires. He must be within 5 spaces of the encounter to help in this way.

Ganging Up: heroes may gang up. If they do, then they choose one main hero to lead the attack (usually the one with the lowest target number to hit) and each hero assisting adds 1 die roll to the total. They must be within 5 spaces to help like this, and the lead hero always gets the treasure.

Party Wins: In this version, the party plays as a group and wins when the total GP value of gold for all heroes is collectively gained. In this mode it is suggested that the stakes be higher (so death is the loss condition for any one hero): when you "lose a turn" and get an hourglass icon, you also get a gravestone. When you get three gravestones you die. You can remove one gravestone by going back to the main hall and resting for a full turn, expending one gravestone (and you can only do this once). 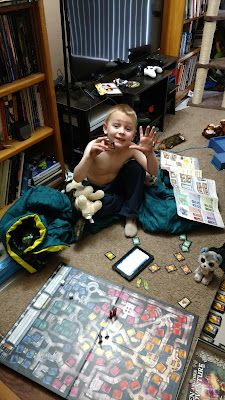