Toying with this idea for a superpowers setting...still tossing around the idea of Savage Worlds, Mutants & Marvels or FASERIP as the ruleset of choice.... 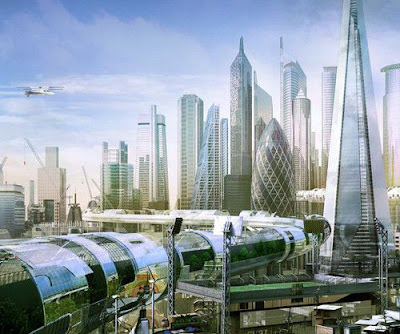 Welcome to Twilight City….a quasi-Cyberpunk near-future dystopian West Coast* sprawl which has exploded over the course of the last decade and a half. Founded as a mining town in the late 1800’s Twilight City grew into a sprawling nightmare, one of the west coast’s most notorious lawless towns. By the mid-forties the town had turned into a decent city thanks to an industrial wartime boom, and it was around this period that some of its first noteworthy costumed vigilantes first appeared, including the Renegade Patriot and Doctor Futurity. By the sixties the city had turned into a major industrial center for the auto industry, rivaling only Detroit until a total crash in the seventies following the oil crisis. As manufacturing jobs fled the city in droves Twilight City collapsed into a steep economic decline and crime exploded.

In the year 2000 the New Twilight City project was founded from the Council of Civic Restoration a state appointed council to invite corporate and architectural interests in to revive Twilight City. The project was so named because it was seen as the modern industrial answer to the urban nightmare that Twilight City had become. Designed to attract the attention and interest of tech start-ups across the world and serve a primary focus for competition and development in science and research, Twilight City initially served well as a focused, upscale living experience, attracting dozens of major corporations and many, many more startups. By 2010 Twilight City had become the most famous high-tech city in the world, and the national center of innovation and advancement.

Today, in the not too distant future, Twilight City is regarded with a measure of awe and is the leading city for growth in the nation, possibly the world. As the population explodes the city has grown too quickly, and crime has returned as an unexpected problem, one which not coincidentally seemed to manifest around the same time several industrialized military tech firms opened up shop in the city. Groups like Mystech are also suspected to have had an influence on the growing prime problem, albeit from a rather unusual angle: the study of the occult, something which the rather unique corporation has perfected in ways no one could imagine. Ostensibly Mystech is to the public and its competitors a tech firm specializing in artificial intelligence design, but internally it is harnessing an enormous amount of research in psychic and paranormal studies. Part of Mystech’s efforts have involved extensive resource collection, including highly illegal artifact theft around the world. To facilitate this Mystech used front companies to set up their reliable allies in the city, to provide a legal avenue for the import of goods it needs for its research and to also distance itself in case plausible deniability is needed.

Elsewhere the illegal import and export of weapons technology has become major driver in high tech crime, as has the ever present urban sprawl of neighboring boroughs in California proper, including the Night district of Twilight City which is regarded as one of the largest hell-holes for crime in the nation. As Twilight City grew in its dense center, the old industrial sections of town continued to rot and fester, providing a cheap and easy way for crime lords to continue to import and export illegal goods such as arms and drugs through the city’s vast port.  In the last few years Night District’s problems began to spill over into the renovated section of the city. The high-tech policing used in Twilight City helps mitigate the problem primarily to maintain the city image, but Night District itself now helps to facilitate the growing industrial crime and espionage that plagues its neighbor.

Amidst all of this a new generation of costumed vigilantes have risen up. In the wake of the legacy of the Renegade Patriot a “new” Doctor Futurity has appeared, along with such icons as the east coast hero Arbalest, who has taken up his ruthless vigil against crime with a sidekick named Bowman 13. Spectros prowls the city, seemingly obsessed with Mystech Corp. and its possible wrong-doings. Dr. Damon Cole, wealthy philanthropist, bought the tallest building downtown for his own Cole Research Corp. and the top levels of the tower now house the Phantom Five, including Dr. Cole himself along with Hyperlight, Sabercat, Shaper, and Lady Occult.

Supervillains plague the city as well. The extra-dimensional Lord Rift, summoned by accident during the testing of the Corvus Corp. Supercollider Experiment in 2009 is loose in the city and appears determined to find a way to forge a portal to his home dimension, that he may summon his armies to invade the earth. Killshot is a known corporate assassin that some believe work for Military Dynamics, Inc. which is one of the leading military contractors centered in the city, and his reputation precedes him. Splatterblast is a renegade bioweapons experiment gone wrong that is believed to prowl the city sewers and commit atrocious murders. The Demon is a super-powered thug in the employ of the crime cartel run by the enigmatic crime lord called Mr. Diamond. Many others aside from these criminals have found their way to Twilight City.

*Where is it? Somewhere out there....either an alt-reality world where the stretch from San Luis Obispo to Santa Barbara got some heavy historical retooling....
Posted by Doctor Futurity at 6:00 AM