It's still in pre-order status, but you can get the PDF for free and then the book ships around June 1st. I've pre-ordered by copy, and am now hopeful based on the contents that Classic Fantasy will work for my own dark purposes....especially now that it looks like Magic World won't ever see it's other supplements come to fruition! You can pre-order the book and PDF here (PDF downloads immediately). 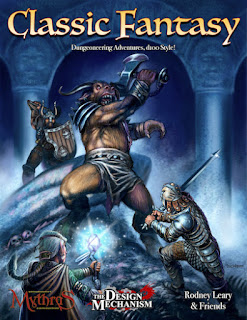 Classic Fantasy provides a sort of skeleton on which you can drape the Mythras system in the veneer of classic D&D-style dungeon delving (and other assorted adventuring). That means it's the usual BRP-style system, but it gives you all the plug-ins needed to keep the game focused on a certain style. But because it is actually Mythras (RQ6) you get a much more involved and interesting take on that D&D experience. I'm already kinda sold on seeing if I can get my group to dive in to it, ASAP.

Here's what it contains:

Combat: I need to read through this section but cannot help notice that it's loaded with tactical minuatures-based combat options. Interesting....

Magic: this takes classic BRP/RQ/Mythras magic and turns it on it's head. We've now got arcane and divine magic that much more closely resembles D&D style quasi-Vancian magic in feel. There are 82 arcane spells and 77 divine spells. It looks like we get enough spells to mimic D&D up to around the 8th to 10th level of caster experience.

Monsters: there are about 80-90 odd monsters here. It's a literal "who's who" of D&D Monster Manuals, and if you combine this with the RQ6/Mythras core, maybe add Monster Island, you'll have pretty much every possible beast covered. CF does not duplicate any monsters from the core rules, unless the D&D version requires a new entry to handle its variant style. I'm really quite impressed....this is a major hurtle for many GMs who (like me) might want to pull a setting in to Runequest but have to do some footwork to add in beasts introduced from D&D campaigns. Now the work is all done....need some dark elves, lizard men, liches, stirges, bugbears or classic D&D trolls in your Mythras game? Here they are.

Treasure: this section is loaded with D&D-esque treasure, includes treasure tables, and is pretty much going to feel very comfortable to D&D fans. Those who like RQ6, Magic World and other systems but wished the design supported more treasure will be pleased as well...although how well the system works if pulled from it's proper place "in situ" remains to be seen.

Passions: this is basically an alignment system for Classic Fantasy.

The Planes: there's a whole disucssion of this after treasure. It also talks deities a bit, and identifies the deities of "Greymoor" which is presumably totally "not quite Greyhawk and not quite Blackmoor, but the result of what happened after Mordenkainen's time-space accident." (that's just my take)

Wandering Encounters: there's some decent charts in the back of the book.

Indexed: it looks decently indexed to me in the PDF, which matters to a lot of people.

.....Okay so my initial impression is that this is the proper answer to people who really like the D&D style and feel of gaming, but maybe aren't so thrilled with specific aspects of D&D, and much prefer the more realistic skill system, combat, hit mechanics and injury rules of Runequest/BRP. This product is dramatically better than the Classic Fantasy Monograph which was released many years ago for BRP.....don't even bother thinking about that book in comparison to this one; this new edition is complete, very tightly designed, and incredibly efficient at what it is designed to do.

It also looks like it was carefully designed with the idea that you could grab any classic 1E AD&D module and run it with this system with minimal or zero conversion.

I'll probably talk more soon and may try to set up a scenario or two with it for the blog. Probably, almost certainly, going to try and run this with the regular group ASAP. It does such a good job at blending the feel of D&D with the style of Runequest that I am simply blown away at the fact that the new Classic Fantasy pulled it off.

I'm thinking maybe my Altavir setting I keep trying to start off the ground might find a good home with Mythras's Classic Fantasy. Hmmmm.