Saturday Looms....What Will We be Playing.... 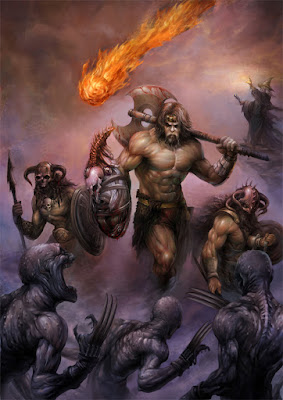 I've thrown a lot of ideas out to my Saturday group as we prepare for a new phase of gaming. I'm thinking, though, that I know what I'm going to run. I feel like a "fantasy, but different" mood. Not necessarily a "rules" different, but a "weird setting" sort of different.

Mythras and Classic Fantasy is on hold until I get the book sometime in June. After that, it's probably what I'll push for next campaign on Wednesday.

13th Age continues to intrigue me....and may well end up being what we play, but I'm pushing hard to see if people will give......Astonishing Swordsmen & Sorcerers of Hyperborea a shot. I've got a real interest in running AS&SH straight up, using the setting in the core boxed set as-is*, with the modules published so far --which means starting with Rats in the Walls since it's the only level 1 adventure for the game I have.

But 13th Age has a lot of interest, too. I admit....the only issue holding me back from fully jumping back to 13th Age right now is my current dislike of the onerous icons system, which is both cool and limiting in weird ways. People do run 13th age without the icons, or mitigating their relevance....but really, I feel like they're sufficiently important to the game's flavor that it makes more sense to save it for when I am feeling inspired.

But the weird classes, world and entities of AS&SH? Those are inspiring me a lot right now.... 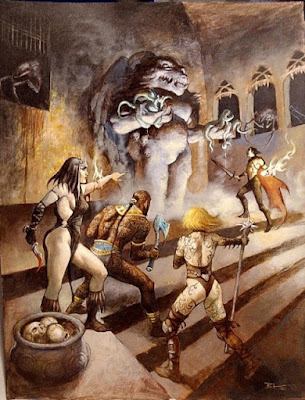 *The minimalist setting is perfect, just enough to jump into with, but not too much to hamper my own development of the Lands of the North Wind.
Posted by Doctor Futurity at 6:00 AM