In Print: Hyperspace Messenger Compendium and Beyond the Wall - Heroes Young and Old

This was a pleasant surprise! 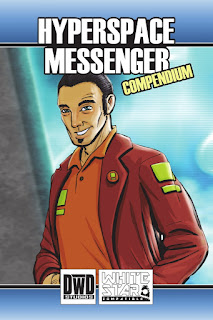 DWD Studios has released a print compendium of the Hyperspace Messenger PDFs for use with White Star. These include some useful rules on new robot types, a good skill system (which my group has been using), stunner weapons, vehicles and more, including (according to the description) a star system generator....some of this might replicate material showing up in the White Star Companion, but having used all of the HM PDFs in my recent White Star campaign I think it's well worth adding to your collection. Only downside I can see if there's no PDF option for the compendium right now. Check it out here. 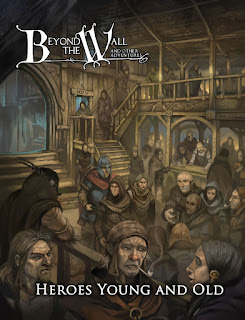 Even more exciting is the new Beyond the Wall - Heroes Young and Old tome, now also in print (and oddly a PWYW model????) which contains 28 (as I count) new playbooks for different character types along with a lot of other useful new player-related content. Great stuff! Check it out here. Much of this (all of it?) may already be available piecemeal in PDF format, but having it in the high-quality hard cover format is really what I want.

If you aren't already aware, I consider Beyond the Wall possibly the best OSR-styled FRPG out there right now, as it's innovative take on OSR magic, the use of playbooks (think lifepath generators for OSR class-mechanic systems), scenario packs (for replayable random themed adventures) and threat reports (for over-arching campaign threats) makes it arguably one of the most innovative OSR designs out there. Hexcrawl mechanics are one of the old school methods of adventure design and exploration that allow one to sit down and start gaming with less fuss and muss than is typical of other more contemporary RPG scenario formats.....Beyond the Wall introduces a story driven approach that is front- and end-loaded on both the GM and player side to create an experience that allows a group to start gaming in some interesting, thoughtful scenarios with almost zero prep....well worth your time to check it out; even if I don't run BtW with the rules as presented, I am sorely tempted to find a way to adapt the playbooks and scenario packs to D&D 5E.*


*I do have this fantasy in which I run a lengthy campaign using Beyond the Wall and all the New Big Dragon supplements, and a medley of classic B/X stuff for support (such as the Creature Catalog).
Posted by Doctor Futurity at 12:04 PM