Back to Savage Space!

Yeah....despite what I was thinking, our group went with Savage Worlds SF last Saturday. So luckily I had all of that along with me (I came more or less prepared for AS&SH, 13th Age and Savage Worlds) and worked out a scenario while everyone rolled some new PCs.

Savage Worlds is always fun to play. The swingy dice and vital nature of the bennies always surprise me when I return to SW after an absence, but the incredibly swift play mechanics make up for it. I'm not sure I would get any less of an experience out of using --say-- White Star, but as I put it, "Savage Space is a hard space opera setting with a modicum of seriousness swirled in with the action," whereas my White Star campaign was clearly a "let's see what a gonzo anything-goes-kitchen-sink SF campaign looks like.

I was planning to show off "WOIN," the What's Old Is New RPG from EnWorld Publishing but completely forgot to bring it. Next time....definitely. It's a more nuanced system, not necessarily more complex but provides more detail; it's mechanically around D&D 5E in complexity feel, I think. I'll post more about it soon....it's currently in the running for "systems I might actually GM soon."

Anyway, I had done a lot of prep for AS&SH so I was mildly disappointed that the group didn't go that direction.....people in the group had the following reasons not to: 1. and SF option was on the table and they really wanted to try that; 2. selling AS&SH as "a refined and specialized AD&D" was discouraging about 2/3rds of the group who are apparently not as OSR-hip as I might have thought; and 3. No one had a copy of the rules, unlike Savage Worlds, which despite my assurances that ownership wasn't a requisite didn't really work out so well. Ah well, another time.

I'll just say that I really like the Ghost Ship of the Desert Dunes module, and plan to run this one way or another....even if I have to adapt it to D&D 5E or 13th Age or something.  Jeff Talanian's writing style is exactly what I like in a published module. 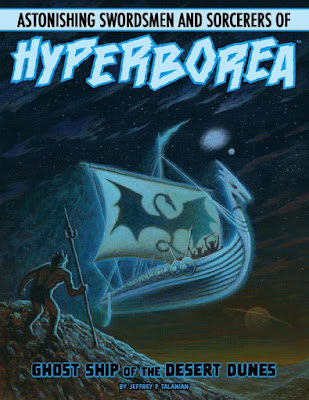