I'm working on my Altavir setting....promise! But while I'm developing that, let me show you this spectacular OTHER setting which I have been developing extensively over the course of several years (since 2010) and which has already been the home of a half-dozen campaigns.....

Enzada is a setting that I would describe as, "The sort of world you devise when you've been playing D&D too long." It's about the inversion of tropes and commonalities in fantasy settings, especially those of my prior worlds, and a subversion in general of D&Disms (to varying degrees of success and failure). It started in Pathfinder, which is an excellent system in terms of options for GMs looking to run non-Anglicized fantasy settings, may I add, but it is also an excellent fit for D&D 5E, which this adaptation shall be a presentation of. 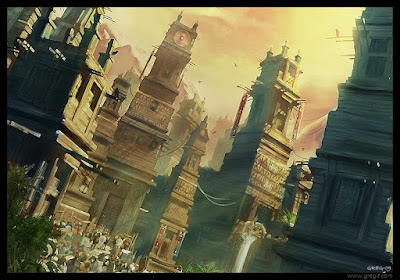 Enzada is a huge, ancient world. The campaign centers on the “meeting of the Three,” a great region that is essentially a land bridge between three main continents that are slowly converging on one another in geologic time. It is here that the three distinct cultural groups of the world clash, trade, and engage in ready commerce. This hub is called Etyri, after the name of the god of commerce, engagement and diplomacy.

The three continents are Dasam, Merille, and Faddasar respectively. Each continent is immense and supports a large number of local cultures, kingdoms and species. There is no unified government of particular note, and no distinct empire that commands the attention of all others, although on the northern continent of Merille the young warlord Atrascus of Shevalah has conquered more land and united more people under his banner in ten years than any other previous ruler in the last thousand years.

The people of Enzada have a diversity of cultures and religion, with three dominant pantheons for each continent, each of which has its variations and exceptions. Visitors from our own world would note that many archetypes among deities are represented among all three religions, though they often take strange paths away from or parallel to the gods of our own old world mythology. Chief among all gods is the Unconquered Sun, the Sol Invictus, which is regarded, curiously as a light-bringer and a destroyer god. It was foretold long ago by the prophets of the god called Tenadrus the Librarian that the sun would one day swell to destroy the world, to purge it of all life and begin anew. This conviction that the end-times draw near makes for many fatalistic viewpoints on Enzada, and many cults of redemption and apocalypse thrive in this era. It does not help that many orders of scholars and astronomers confirm that the sun does, indeed, seem to grow larger, hotter, and redder with each passing year.

The geography of Enzada is as diverse as any Terran world, but it is a hotter planet and one must travel to the distant north to find constant ice and severe weather, although winter storms can bring terrible weather and snow just about anywhere; the storm god Emachus is revered as a terrifying deity that must be appeased, a harbinger of the wrath of Sol.

Most of Enzada’s gods are both terrifying and benevolent at different times, and the various religions of Enzada seem to have eschewed any philosophy of divinely appointed notions of good and evil long ago. To be sure, there are some deities that are distinctly benevolent or malevolent in their depictions, but the notion of one deity holding sway over the morality of all other beings is a concept rejected by most all of Enzada’s faiths. Because of this, those men of the world who can practice the Patterns, as magic is usually referred to, find that while magic can often tell one of the intent of a soul, it cannot tell you the truth within the soul itself. This is not entirely true; many forms of magic can compel one to reveal their inner nature, but such magic is considered profane and punishable by death if one is caught using them. The same is true of charming magic and other compulsory effects, which mages may use, at the risk of condemnation or punishment by local laws.

Some of this fear of the darker Patterns of the world is inspired by a time more than five thousand years ago, when the old Inhuridan Empire rose to power through its use of thought and mind-controlling magic. The Inhuridan Empire fell under its own malignant cancer, but not until its dark templars and evil god kings had ruled for a thousand years across the Hub of Etyri and beyond. The ruins and relics of this ancient empire still dot the lands of Etyri to this day, and some of its greatest monuments can still be seen in Mazadran, as well as its fabled lost necropolis, Drath. To this day, the legacy of the Inhuridan and their vile demon-summoning god kings is so powerful that evil men seek their dark secrets out, and an order of dedicated Paladins called The Hand of Skarradesh, founded by the slave who rose up and cast down the old order, still work to eliminate any presence of the Inhuridan or their influence in the modern world. These paladins use some of the mind-probing magic of the ancient empire, though in limited form, and only in their efforts to destroy others who do the same; it is their belief that they must call upon the evil of their nemeses to cast them down.

In the Hub of Etyri there is a city greater than any other, located in the Free Lands of Selindar. This land is considered independent and open to the merchants, travelers and adventurers of all societies who would seek knowledge, trade and adventure. The hub of this free land is Uralhat, a vast coastal city which provides a major connection point between overland caravan routes to the three continents, and the waterborn routes of the Vanzarik Ocean. Uralhat is ruled by a benevolent dictator elected by an entrenched republic of elected senators, two chosen from each of Selindar’s free cities, and one each from its towns. There are seventy senators which convene in Uralhat, and as many special representatives, diplomats and ambassadors from the many lands that stake a claim in Uralhat. The current lord protector of Urlahat is Erinsada Dimanes, a thirty-year-old woman who was a priestess of the goddess Natyne before she was elected to regency one year ago. She is a shockingly beautiful mix of northern Hardanish looks with golden hair and green eyes, and the golden dark skin of the southern Xar nomads, where her mother hailed from. She has proved to be an excellent arbitrator in her last year, although she relies heavily on her appointed general Camostus Broges to maintain the standing army which insures Uralhat and Selindar remains free of any undue influence, especially from Mazadran, which is presently ruled by the overly power hungry king Theridos, who has visions of controlling Uralhat himelf. 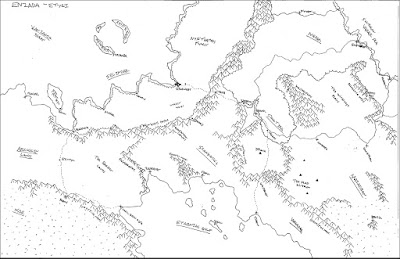