Tales from the Sea of Chirak IV: Intrigue in Dunnare

I am way behind on these! Time to catch up: 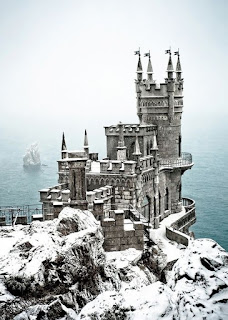 Naivara, the noble half-elven wizard
Tia, the half-elven priestess of Kalieyana
Ungarak, the half-orc paladin of the cult of the forgotten
Nehenac, the immortal last emperor of Xaxican and former prisoner of the Fortress of Hathor (NPC)

We have had some in-and-out guests, will name their PCs if I remember who they were....

When we left off, the crew had arrived in Port Dunnare after some harrowing adventures. Here they have had a day's rest before awakening to a busy day.

In this session the group divvied up to gather information and learn about the port. Key events that transpired include:

Ungarak stumbles on a murder....a druid was slain outside the city in the farmland and crucified on a tree. Evidence suggests it was orcs who did the deed. In following up on this they met the Watch Commander of the city, and learned that this has been an ongoing problem....the orcish tribes of the Northwood seem to be uniting, and are targeting the druids dedicated to the "White Goddess," a local spirit figure revered by the tuadathen elves.

Naivara enjoyed a pleasant stay in the Royal Inn. In the morning she meets Kargath, the minotaur who is a priest-dedicate to the mysterious cult of Hun'hunal, who is sipping martinis on the patio and scaring away customers. She learns Nehenac awoke at dawn and left early on an unknown (and worrisome) errand. She investigates where he went, meeting with Ungarak on his own investigation.

Tia spends time at the local (and smaller) temple of Kalie'yana, before setting out to meet the rest.

The group ultimately finds that they are directed to the Hunting Lodge in northwest Dunnare, where the Warden of the Northwood, a ranger named Ovidio, keeps his own special order. Ovidio might know more about this mysterious local threat by the orcs which has all concerned.

They arrive at the North Lodge and learn that this ancient fortress on the city's edge has been here for at least six centuries, predating the arrival of the old Sea Kings and the founding of Espanea. It was further built on top of older ruins that may be ancient. Ovidio, a pleasant older ranger, has had the complex in his family for almost four centuries.

As it turns out, Ovidio's lodge had an unexpected visit this morning: a mysterious man that by description must be Nehenac broke in, entered the catacombs beneath, and sealed the passage off with a hidden stone block that even the rangers didn't know about. They are working to find men who can remove or chisel away the stone so they can pursue the invader, who is now locked in a catacomb that runs seven levels deep before ending at a flooded passage.

Tia uses her true seeing to discover three hidden secret doors: one is a plastered wall behind which it turns out is what appears to be an ancient planar gate, now overlooking the pig pens. A second secret passage is in the back of the pantry, and a third is in the armory. Ovidio knew of only the pantry, which leads to a secret passage out....a safe passage to escape the fortress if it's defenses were ever compromised. The other two were mysteries; none lead to alternative routes to the catacombs so far as they know....at least not without investigation!

The group begins with the armory secret door, after determining the other is a hidden gate that is very worrisome. Ovidio explains that Taddeos, the high wizard of the local Academy, outfitted the armory as a gift a few years ago with four enchanted suits of animated armor. Each suit contained a silvered skeleton on which the suit draped. As they investigated, pulling a decorative shield triggered the skeleton-armor to turn and push a pivoting hidden door in the wall, revealing a wide spiral staircase going down. This is quite a surprise to Ovidio.

The stairs descend in to a chamber with a strange, blue-illuminated pool dominating a large chamber, with a passage to the right and a far wall in the chamber that appears to have a charnel stone sculpture of human flesh and limbs carved out of marble, partially overlapping two doors along that wall, such that they don't look like they can be opened without breaking the wall statuary to do so. As Naivara gets closer, it turns out the wall is alive! It is flesh with a gray pallor, and moves slowly but certainly, speaking in telepathic whispers, asking the adventurers to come closer, just a bit closer. They decline.

The group, fascinated at what's going on here, head to the passage in the right and follow a cooridor to a large, oddly shaped chamber with six deep cistern-style pools on the floor with utterly still water, and what appears to be a massive white dragon skeleton suspened with metal wires from the high ceiling. Each cistern has what appears to be a sealed iron hatch at the bottom of each pool.

Before they can really investigate a horde of bloody skeletons burst in from two of the three doors at the end of the chamber! A brutal fight ensues, as several of the skeletons appear able to summon a maelstrom "blood storm" in which acidic blood fills the chamber, eating at flesh and blinding the eyes. The party is immediately fighting for its life, and narrowly defeats them after a brutal fight.

In the middle of the fight one of the bloody skeletons is knocked in to a cistern, and its body begins to dissolve immediately....the cisterns are not full of water, but caustic acid!

After they skeletons are defeated the adventurers, with a badly wounded Ovidio, quickly retreat to recover and regroup. They have a very dangerous mystery to solve...

While resting up, a messenger boy from the Royal Inn arrives, looking for Naivara. He has a message from Nehenac, who states that he needs to learn if his "old cache" is still intact, and that he feels he must prepare for the revenge he is commited to against the ancestors of the Masirians who wronged him. He states that he knows the Lodge contains a secret entrance to the old Vault which he built beneath the lost Xaxicani colony that once rest on this exact spot, 2,500 years ago before the Masirians razed it to the ground....and he thinks they may never have found his hidden cache in the vault. 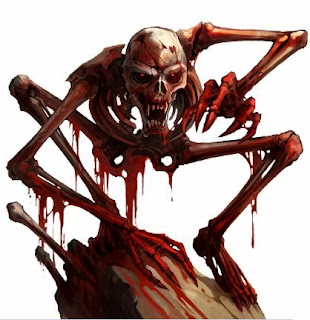 Posted by Doctor Futurity at 10:30 AM