The OSR has done wonders for preserving the memory of games from the first decade or two of the hobby, and it's kept them alive either spiritually or in some form of retroclone. The OSR was strong enough that I think it is at least part of the reason that we ended up getting reprints of no less than four editions of D&D (not to mention the D&D PDF store), and is why we continue to see effort poured into making older games such as Traveller and Runequest available through various editions and iterations.

There are, however, some games out there which are worthy of this sort of respect, but which linger on in limbo, neglected by all save a very small handful of gamers who still have physical copies to play around with. Some non-D&D games have gotten some attention, yes....the 4C System is a decent lowdown on the classic Marvel Superhero RPG from TSR, for example, and others appear in decidedly more nebulous format (such as how Star Frontiers exists as a thing you can buy if you don't mind feeling a bit shady about the process).

Nope, this is about those games which, despite popularity or venerable status as classics, haven't somehow gotten their proper due when it comes to the OSR revival. Or "osr" revival if you're one to quibble that the hobby is exclusively about D&D and everything else is at best a fringe case. So without further adieu....my top five RPGs in desperate need of an OSR revival. All they need is a champion with the spare time to figure out how to massage the OGL into coughing up a suitable replica....or a crazy publisher willing to spew forth a working reprint or revival: 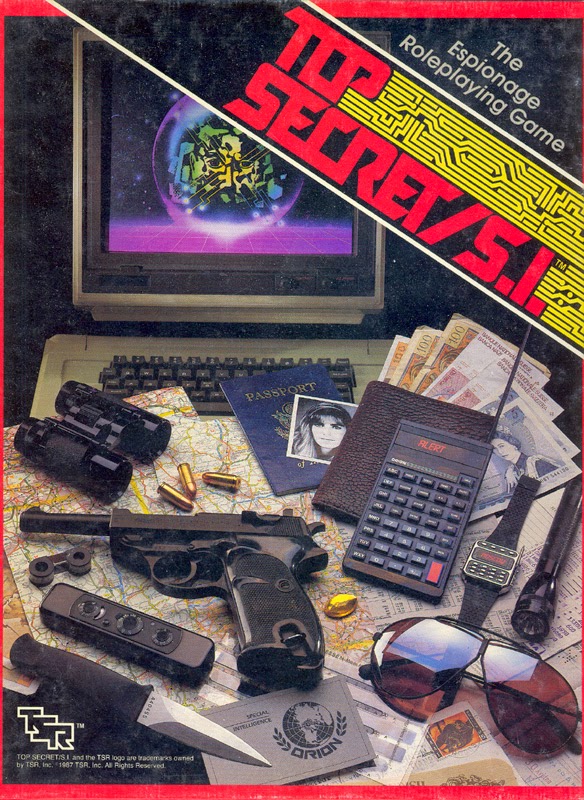 Top Secret was part of an 80's wave of spy/espionage games and one of the most memorable. The second edition might arguably have been the better edition, but it was nonetheless a great game and did a fine job of conveying the genre from an 80's cold war style. It's possible later competitors like the Bond 007 game were better, but Top Secret was the one that first grabbed me.

Status: presumably part of WotC's wholesale grab of TSR, it is theoretically possible they could do something with the game but I think we'll be fortunate if they bother to scan it in for PDF re-release. 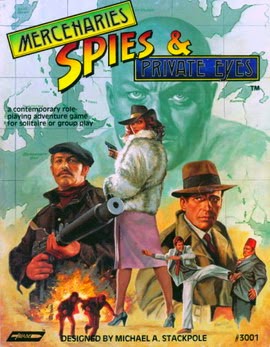 Even better than Top Secret was Mercenaries, Spies & Private Eyes, Mike Stackpole's magnum opus of gaming (because sometime after MSPE he moved on to fiction and never looked back). MSPE was based on the same core system as Tunnels & Trolls 5th edition, adding a skill system in and demonstrating rather amply that regardless of how irreverent and beer & pretzels T&T could feel, MSPE could use the exact same system for some serious gaming. The book was, like all Flying Buffalo products of the day, clean and exceptionally well organized with loads of interesting bits. One of my favorite games of the last four decades was in MSPE.

Status: MSPE currently languishes in the hell that is reserved for games that passed in ownership to other less stable/responsible publishers. So while Flying Buffalo exists and is producing new stuff even today, MSPE is not a part of that, having been bought by Sleuth Publications, which folded a few years later and also took Different Worlds magazine with it, as well as some great Tekumel books (as I recall...or maybe it was whoever bought Sleuth, and then THEY folded, too). The good news is you can still get copies of MSPE and most of the content released for it over at Flying Buffalo's online store. If a new iteration of MSPE were ever made possible all the game would need would be a an update to the modern era...the core rules could remain as-is. 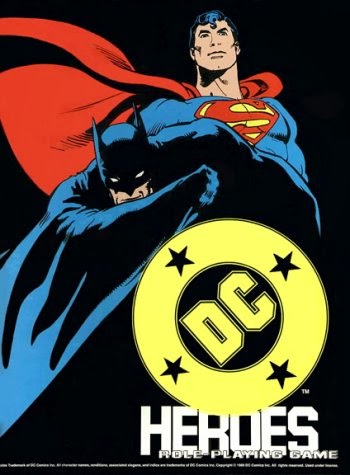 DC Heroes went through three editions before Mayfair Games had some sort of meltdown and liquidated their RPG line. The core mechanic, called the "MEGS" system for Mayfair Exponential Game System was a stroke of genius and this was my second-most-played game system for most of the late 80's and early 90's outside of AD&D and Cyberpunk 2020....it was such a smooth system, and it handled the vast power differences of the DC universe flawlessly.

Status: Sold to the people who released the system as "Blood of Heroes" and then disappeared off the map, MEGS languishes in forgotten game hell now. The only consolation I can suggest is that Mutants & Masterminds 3rd edition moved to a stat system with exponential values that is distinctly similar to MEGS. 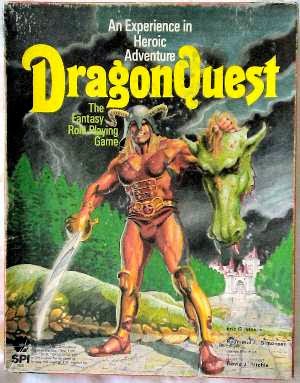 When SPI carved its way into RPGs it did so as only a wargame company could, with complex systems that were viewed by some as on the extreme end of the bell curve of complexity. Dragonquest quickly became my go-to system right after Palladium Fantasy and Runequest back in the day when I formally abandoned AD&D between 1985 and 1988, and I did not leave it as my engine of choice until AD&D 2nd edition (and a large table of begging and pleading players) coerced me into the dark side once more.

Dragonquest was robust, filled with exotic modifiers and details including astrological signs and a combat system that would make D&D 3.5 blush with jealousy. It's format was strongly aligned with the protocol for the era of wargame rulebooks, something that proved daunting to those who had not dabbled on both sides of the fence. It later fell into limbo as SPI was bought out by TSR, and was then revived in a new 3rd edition which received one module for support. A hypothetical future sourcebook still exists on the internet.

Dragonquest was noted for its elaborate rules on demonology with a strong focus on "medieval" feeling magic. When it was revamped by TSR it became a victim (and benefactor) of the "we are terrified of the fundamentalist anti-D&D crowd" focus TSR had adopted, and the demonology was removed entirely and replaced with a new set of rules on elemental summoning. The ideal 4th edition of Dragonquest would include both the new content and the missing old content.

Status: presumably one of many games sucked up as part of TSR by WotC, but suffering because they already have a flagship game. The best we could hope for would be a re-release in PDF down the road. There's a hidden online fanbase for the game as well, if you search hard. 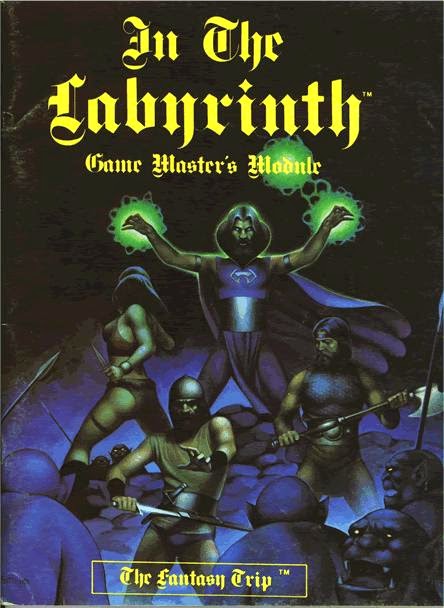 Need I say more? Fantasy Trip was for many the defacto alternative choice to AD&D back in the day, and was considered by many to be more playable and functional than other competitors of the time. It became the spiritual father to GURPS 1st edition and the Man-to-Man sourcebook which Steve Jackson Games released was effectively a second edition of Melee. Unfortunately TFT died when Metagaming went belly up after a scandal involving a "treasure hunt" for a million dollar gold unicorn advertised in a supplement, with no prize ever forthcoming. Steve Jackson's efforts to buy TFT outright were thwarted, prompting him to instead create GURPS.

TFT was so amazing because it was such a tight, concise system that offered all you could possibly need or want in one very clean, comprehensive package. It was the anti-D&D of it's day because it managed to be both complex and organized. It had sourcebooks which offered solo play, books like Melee and Wizard which offered tactical combat experiences, and the full "In the Labyrinth" which graduated it into a fantastic full-featured RPG. It was designed by Steve Jackson, and it shows. The map and minis/chits combat was fluid and fun. It was a Full Monte style package. I had a friend back in the day who practically devoted his life to this game...he never played anything else. I tracked down all of the books I could back then, and loved pouring over every detail it offered. This was written at a time when every word was worth reading, nothing was just filler text.

Status: The Fantasy Trip plays like a tight, pared-down version of GURPS which focuses on gritty, low-magic calculating fantasy with an emphasis on tactics.* We could technically have a version of TFT today of SJGames released a Lite version of GURPS which skinned the system down to just the stuff that would coincidentally exist in an iteration of TFT. As it stands, to get the pure deal you need to hunt around online for those sites which keep it alive, sometimes in the form of bootleg PDFs. Then you have to try and explain to your younger gamer crowd (or older D&D-obsessed gang) what TFT was and why it was so amazing. There's also a "version" of it in existence that has some current scenarios in print that model themselves loosely on Metagaming's old boxed sets here. Dark City's pretty close in terms of a modern rendition, but they still don't have a good hardcore "In the Labyrinth" product out, last I checked, to bring it all together.


*Note that a "tactical" experience in 1979 was decidedly different from what we think of as tactical today. A lot grimmer, high mortality rate, and no superheroics or game systems designed to keep you in the game through gimmicky rules designs. TFT comes from an era where tactical meant a sword to the gut was likely your PC's grizzly end.
Posted by Doctor Futurity at 6:00 AM