Character Generation in The Void Core 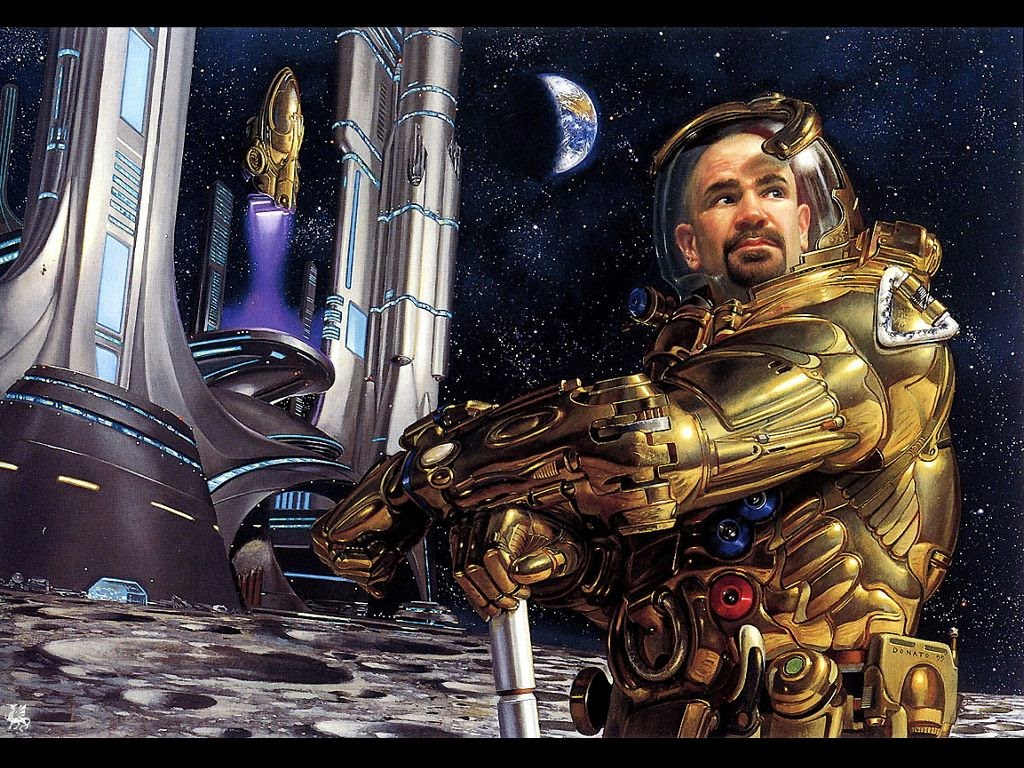 Characters in the Void Core rules tend to come from one of three Warden Professions: the enforcer, investigator and researcher. There’s also a freeform character generation option available. We’ll go ahead and stick to standard character generation this time around; wardens are the peacekeepers and law-enforcement officials of the Void universe, and are the core rule defaults for a reason: when something weird happens, they are the first line of defense to get called in to investigate. It’s the ready-made convenient way to justify players investigating mythos incursions into the solar system without running out of too many dead relatives (a tried and true classic hook in 1920’s style Call of Cthulhu).

To start my character off I’m going to think about a bookish sort of fellow, possibly a Warden Researcher because this is a Cthulhu universe after all, and guns probably never did anything except make monsters angry anyway, right? We’ll call him Arnold Hawthorne because why not, and it sounds like a good mythos investigator’s name.

Step one is to figure out the birthplace of Arnold Hawthorne. There are 16 key planets and moons that contain meaningful habitats represented here. For fun I’ll pick the Saturnian moon of Tethys, where Odysseys colony is located. Colonists of Tehys are water miners, working along the famous Ithaca Chasm in a very “frontier town” sort of environment. Aside from givingArnold his native language at rank 5 (presumably English) he also gets E-Suit 1, Freefall 1, and Trade: Product 1 as skills.

Since Tethys is so “out there” on the fringe of the frontier, this tells me Hawthorne’s interest in science and academia was something that he nurtured against the grain of the local prospectors. He probably grew up around lots of frontiersmen who had good mechanical skills and the requisite familiarity with physics and space necessary to stay alive in a crunch, but his real interests lay in higher order physics, perhaps, or a more compelling intellectual calling that went well beyond ice mining.

Stage two is to choose a primary specialty. We’ve already established that we’re going to go with researcher over the combat-focused enforcer and info-gathering investigators, so Hawthorne will be focused on the R&D side of the operation. With that decided, stage three is to determine two secondary specialties based on the primary. For a researcher, these secondary specialties include artist, engineer, physician, and social butterfly. Okay…..I’m going to have to conclude that engineer and physician may be the best choices for Hawthorne, whom I do not see as being very artistic or social, so maladjusted and introverted, as a proper mythos investigator should be.

Stats for the game are assigned with an additional 5 points to customize. The freeform version gives you the full point pool to work with, but we’re going by template so I take the base stats and add 5. For a researcher it indicates that awareness and cleverness are most useful. I take those 5 points and boost both of the core stats, as well as perseverance.

Hawthorne’s stats will look like this based on the preceding choices:

I’m going to be focusing heavily on Hawthorne’s mental acumen here, as I am sure you can tell. For skills, he gets 30 points to distribute among his primary skill set. Skills are a 1:1 cost ratio until you reach rank 3, after which it costs 2 skill points to get rank 4 and 3 points to then get rank 5. Here’s what I purchase for Hawthorne, including points gained from his home turf:

Not bad, but I am left wanting. Good news is, I can take 20 more points and divide 10 each among my two secondary templates. I pick the following:

In doing this I now see that Hawthorne’s interest was in human psychology….something perhaps which has eluded him due to his own lack of social grace and skill. That said, it was impossible for him not to pick up a hefty volume of lore on space sciences and ship functions, a side effect of necessary basic survival skills on the frontier worlds and moons.

With skills out of the way, next is Qualities. You get five points to spend on qualities, which are like advantages. You can also take a disadvantage, which gives you at least 1 point to spend on further qualities. Unlike skills these all have set costs. For Hawthorne, I look at the following as good choices:

Common sense seems like a no-brainer; it means the GM makes a secret cleverness check when you’re about to do something foolhardy. Growing up in the frontier of Tethys could make for a compelling argument that you learn to double-check everything you do, second guess all your actions, since you’re always one bad idea away from explosive decompression.

Aside from common sense, eidetic memory is a great trait…photographic recall is useful for a researcher and also an annoying ability for those who would sometimes prefer not to remember everything they’ve ever seen or experienced. Lastly, I pick Nightmares as a disadvantage to afford sixth sense, which means more GM-controlled secret tests to see if Hawthorne also picks up a sense of imminent danger. Hawthorne is not a beautiful biological early warning detector. All he had to give up in exchange for these perks was terrible sleep from persistent nightmares that are (possibly unknown to him) a byproduct of the incursion of entities from beyond the solar system….mechanically it means each morning he needs to make a perseverance test, and on a failure he drags around at -1die to all tests for the day. I can see a Hawthorne that may be reliant on stimulants and medications which knock him out entirely to survive through a night with uninterrupted sleep.

You also get to pick a talent. Talents are “feats” in a way, giving an edge to your warden in his daily adventures. From the appropriate researcher talents I pick:

Talent: One Foot in the Grave

With this talent, Hawthorne, probably due to the nightmares, knows that something is out there and it will inevitably get him. Mechanically, when he suffers a Horror Effect he can shift it up or down one result on the table. This can actually be useful….if, for example the default effect he suffers is “Freeze” Hawthorne can actually choose to “shriek like a little kid” or “faint dead away.” Screaming could get help to arrive…and fainting is never a bad idea when you are facing the mythos, as they are notoriously disinterestd in unconscious creatures. So it’s a weird talent….it adds a little agency into just how grizzly Hawthorne’s end might be.

Finally we get to stage four of character generation. We get two quirks, which much like GURPS quirks are things that are interesting but not necessarily special. From the example quirks provided I pick the following for Hawthorne:

Hawthorne is an immaculately clean fellow and his environment shows it; he doesn’t like clutter or dirt. Likewise, his obsession with psychology has led him to delve deep into obscure factoids about the early rise of psychiatry in the 20th century….friends and acquaintances are used to him making one-off comments about Freud and Jung in otherwise polite conversation.

Characters under the default character generation are presumed to be experienced professionals, and fall around age 28 to 35. I’ll put Mr. Hawthorne at Age 34, the tail end of the age range.

On gear, The Void uses a wealth code system. Default characters (without special advantages) have a personal wealth of 2 and sponsored wealth of 1. The wealth 2 raiting is “middle class.” If you want to purchase something and it’s under your wealth rating….then no problem, it’s yours. If you want to purchase something at or over your wealth rating, then a skill check determines if you can, in the form of a purchase test. The difficulty you beat determines whether you deplete your funds, by how much, and whether you can keep spending. It’s an abstract mechanic that can keep the focus away from the game’s  economics, though if your players are like mine they like counting every credit they earn, so YMMV on this one.

For Hawthorne, however, his wealth level is enough to buy a ACC-44 holdout pistol if he needs it along with a flak jacket. His goal is not to get into that kind of trouble, however, so our main interest is in useful research tools. It is at this point that I realize that while a lot of discussion is provided on tech, only weapons and armor get specific stats with wealth codes, so I will just assume Hawthorne has the stuff he needs to get the job done and make it all up.

And so we now have a complete adventurer in The Void using the core rules:

Next: Hawthorne vs. a mi go!!!! Or maybe a look at the lifepath generation system in the Expanded Characters Book. 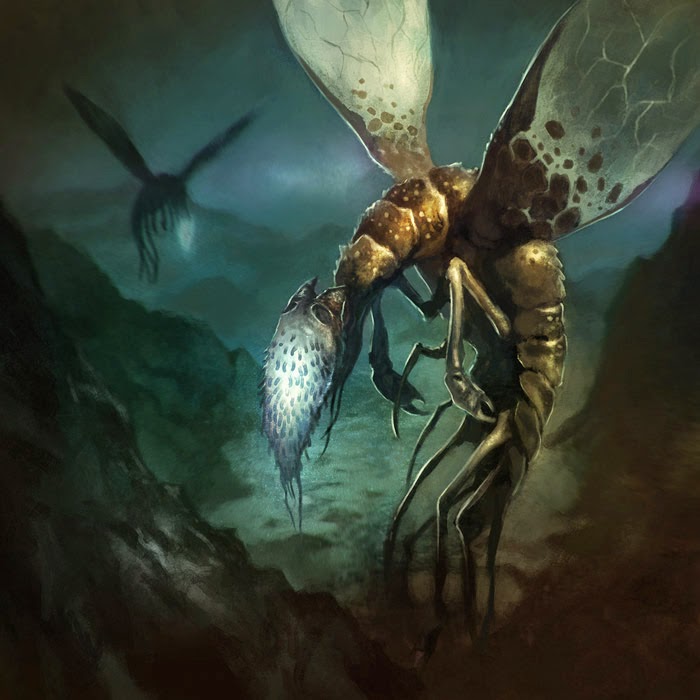