The Witch of Galitath for Magic World

Continuing my adaptation of Pergerron to Magic World, I look next to the revision of the Witch of Galitath.... 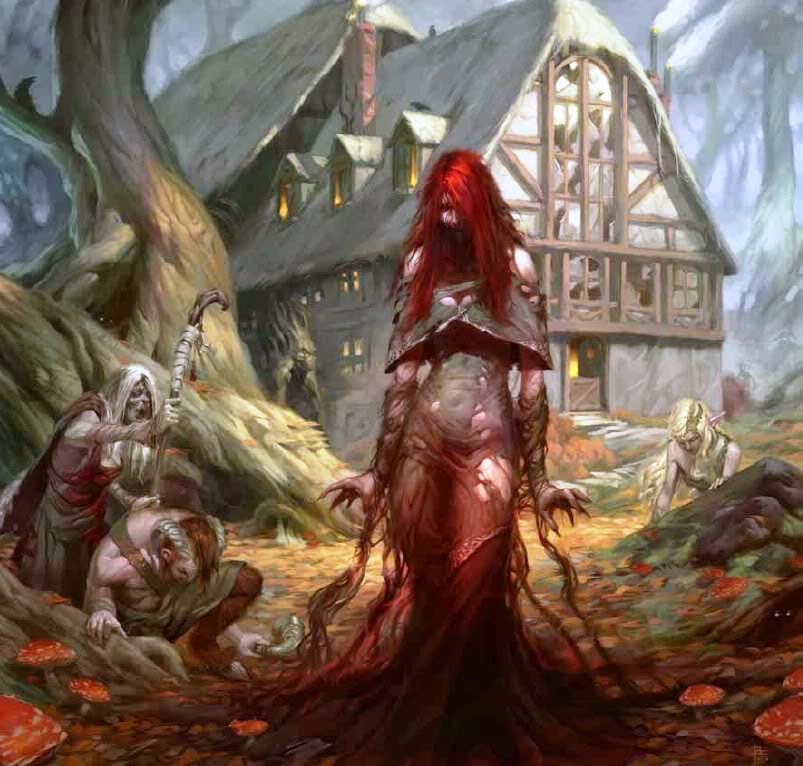 Helm of Technomancy: Terragia's decorative helm contains ancient technomagical secrets which let her speak with and control the meks (see killer robots, page 359 BRP, but no ranged weapons) who serve her so willingly. Her helm also allows her to ethereally cut a portion of the katra of willing target away, and implant it in the ether engine of a mek to power it. An unwilling target of this effect (which she can do once per day) must make a resistance roll vs. potency 20. The target loses 1D6 POW but gains 1D4% per point of POW loss in a skill of choice. The experience diminishes the spirit but the immaterial bond with the mek proves an enlightening experience. Once one's katra has been bonded to a mek, that mek will always behave as a friend and protector to the donor (so long as he/she lives).

Immortality: Like all demiurges, Terragia has a form of immortality, such that she can only readily be harmed by enchanted weapons and spells, and regenerates 1 hit point of damage per round. To slay her requires dismembering and burning her body. She will resurrect 1D6 months after being slain, appearing somewhere in the bramblewood of her homeland. The myths say that she can only be slain if one finds the exact crop of bramblewood she will regrow in and burn it down, then salt the earth.

Some call her the Bramble Queen, for she is said to haunt the thick, spiny woods along the foothills of the Askofar Mountains. Others call her the Lady of Sar, for she seems to have an uncanny familiarity with the mechanical golems of the ancients, the so-called meks. Those men of the Barbarian Lands who claim to have met her in person say she is at once cunning and mad, and surrounded....always surrounded....by the hideous brambles that spring up wherever she walks.

On one occasion, the regional hero known as Arabast the Cleaver said he met Terragia on a dark night, under the harvest moon after a particularly gruesome battle against a horde of orcs. She was sifting through the hundreds of corpses that had piled high in the battle when she came upon Arabast, wounded and recovering from a rattling blow to the temple. She offered Arabast a choice: to suffer his wounds, but in so doing, if he healed, he would be stronger than he could imagine. Or she could heal him and insure his health, but in exchange he must give of her a portion of his spirit, his katra, as the Galitath call it, a concept similar to but not quite the same as a soul.

Arabast considered her offer and decided he would have none of her withccraft. She left him to his own means, as her hulking mechanical giants carried off dozens of corpses. A year later he found himself ruler of the entire Northrender clan, ten thousand warriors under his banner. "She knew my destiny," he once said to his young wife Ezeta, "and she let me choose it. I could have been fodder for her machines....I think she steals the katras of men, and that the meks she commands are powered by those fragments of our spirits."

The truth about Terragia remains a mystery, but there are a few other facts worth mentioning:

Terragia is visited once a year along the coast by a contingent of priests and nobles from the Great City Phantomax to the distant west, often bearing strange concotions and tomes of eldritch lore in exchange for some of her fabulous meks

Terragia is shunned by the orcs, and her mere presence at an engagement is enough to send them routing

At least a few priestesses of Suliversa in Tordalis claim that Terragia is the bastard daughter of their goddess, from a tryst with Tokandros
Posted by Doctor Futurity at 6:00 AM