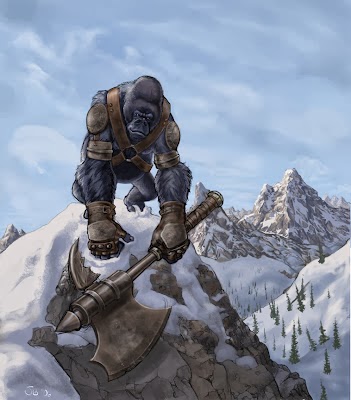 Deep in the wilderness of the immense Amech Jungles are an ancient race of intelligent apes, beastmen who's origins are now lost to time, though some scholars of esoteric lore suggest that they were created as warriors and slaves for the ancient Kadantanian Empire, a cruel regime of mad sorcerers which fell centuries ago to internal conflict.

The baltorklani are actually descended from several magically uplifted apes, including chimpanzees, baboons and gorillas. The gorillas deeply resent being compared to other lesser apemen, especially chimpanzees, which they despise as cunning and untrustworthy. There see the baboons as chattel and treat them as such, delegating the baboons to lesser slaves whenever they can.

In the Amech wilderness the three types of baltorklani tend to segment themselves whenever they can, at least in those cases where a powerful gorilla warrior doesn't rise up and subjugate the others to form his own small empire. These baltorklani gorilla leaders are very dangerous to the human populations in such regions, and the kingdom of Belladas remembers the war with the baltorklani warlord Jezovash less than a century ago well...it was a costly battle.

Baltorklani Chimpanzee Men
Level 3 Spoilers (humanoid)
Initiative +8
M: Twin Daggers (+9 attack, 10 damage) on a natural 2 the chimpman may reroll the attack; the chimp may pop free after the attack.
R: Slingshot (+8 attack, 9 damage) on a 16+ the target is dazed (save ends).
Dirty Fighting (+8 attack vs. MD against one nearby target) the subject of the chimpman's ire is at -4 to any attack rolls against the chimpman until the end of his next turn.
AC 19      HP 45
PD 14
MD 16 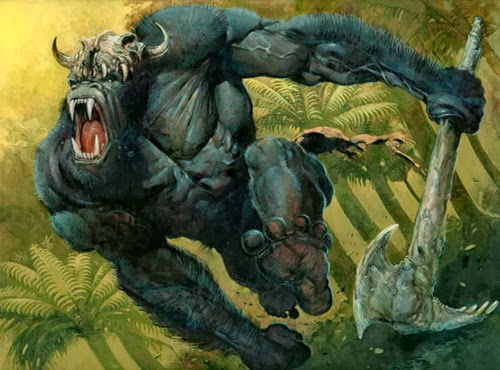