I've bounced back between using visual imagery for random inspiration and simply adapting material from my Lingusia campaign. Instead I decided to do both... 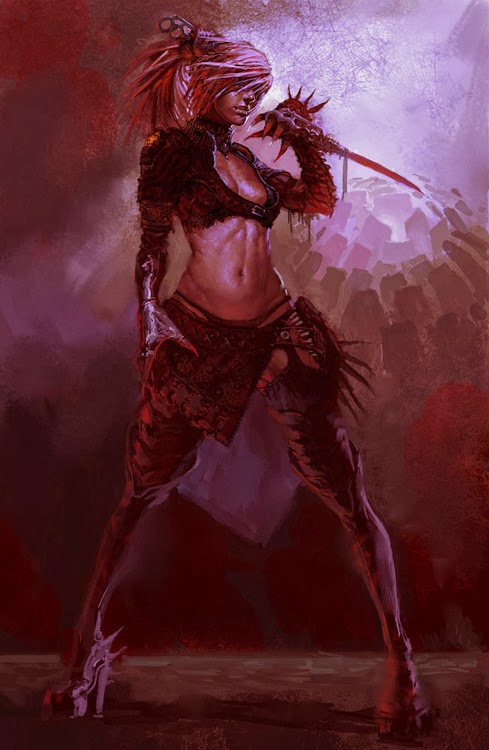 Sytaria, the Blade of Malas

The independent port of Malas is ruled by an errant mix of wealthy merchant princes with more gold than sense and an old clan-based oligarchy that sometimes can barely maintain the pretense of law and order while actually scheming behind the scenes to jockey for power through their various family-run thieve's guilds. Amidst this chaos and carnage there is the local governing regent of Hyrkania, Lord Hastros Vestarason who curses the emperor every morning for the assignment to this post.

Malas is a client state to Hyrkania, but it maintains its freedom by providing generous tithing and free access for Hyrkanian merchants to the city docks. Governor Vestarason does what he can to maintain the peace, but he has limited resources and a modest garrison, small by virtue of the assigned treaty with the Freeports of the Inner Sea. He has learned to rely on other, more subtle means to enforce the peace....one such resource is Sytaria.

Sytaria is a half-elven woman, possibly of mixed sylvan elf and human blood. She never speaks in public, and only her closest associates know she is not mute (such as the governor). Her habit of silence extends to everything she does: every movement, every stab, every swift jump or stride is utterly silent.

Sytaria's origins remain a mystery, largely because her unnaturally long-lived nature due to her elven blood has insured she outlived those who may have known her in the days of youth. Nonetheless, she's been working her murderous trade in Malas for decades now.

There are a few facts that are known about Sytaria:

She carries a long, thin, barbed dagger that is said to utter strange whispers in an alien tongue when she slays someone with it.

Sytaria has a small tattoo on her right shoulder of the shield-dagger-arrow on a field of night that is the symnbol of the Fire Knives. Despite this affiliation, no one is actually sure if she is a member of that order of assassins, or if she worships Haro, the god of murder on her own terms.

Most can find her lounging at the Blue Balrog Tavern along the waterfront on any given ninthday. She is believed to have made an arrangement with the Ogre mage Fajaros who runs the tavern to keep the peace for him on those nights. It has often been remarked that when the barkeep is an ogre mage and he relies on a slender half-elven lass to keep the peace, then one must weigh carefully just what sort of clientele the bar caters to....

The city guard will never, ever arrest her. They are terrified of her. Watch captain Adaeus is said to have once had a brief affair with her. He has since been suspected of being a eunuch by his men, though his current mistress says it's entirely untrue, though she does admit he shows an unusual scar of the sort that might have manifested as a result of sorcerous regeneration...

Dagger of Haro (+12 attack, 21 damage) this supernatural dagger is a weapon blessed by Haro, god of murder. If the natural roll on the attack die equals the current escalation die the weapon deals 42 damage instead and is treated as if it made a critical hit.

Elusive: Whenever Sytaria makes an attack, if she rolls even on the D20 she may pop free after the strikes and immediately moves her full speed to any other location on the map.

Shadow Walking (+11 vs. MD to the closest nearby foe with the highest MD) if successful Sytaria disappears into the shadows (remove from play) and reappears within moving distance on the next round, dealing double damage with her dagger --and double again if she rolls the escalation die on the attack roll.

Sytaria in other worlds: A quiet and determined assassin, Sytaria can serve any lawless city well in which an assassin can ply her trade with little interruption.