So after the last blog here's the late evening inspiration I got up to:

1. I'd let everyone start at level 3. Use the default point buy method in the book (no rolling!)
2. Start with 6,000 credits instead of the measly 1,000 cr. -- this is a bit higher than the book advises
3. Core classes and races only. Ignore chapters "Setting" and "Pathfinder Legacy." They don't exist. If any do, I'll mention it. Some suitable exotic racial options from the Starfarers Companion  might be suitable. All the core races (page 40) are fine. Most of the racial options in Alien Archive may be fine UNLESS they are obviously a fantasy race. Nuar are an uplifted species in this universe, genetically modified animals which were bred on Fringe Worlds in human space as cheap labor to bypass slavery laws.
4. Equipment is whatever you can afford. I'll think about level limits for purposes of the game, but for buying equipment, assume if you can afford it you can get it.

Setting: (Note, edited a couple times because I seem to have copied a draft and not a final....gah)

Setting starts with the near future. Earth is a distant memory, lost to time...but it wasn't only about a century and a half earlier. The region of space everyone functions in today is known as Mayall's Galaxies, a special galactic location of two galaxies in collision.

In 2095 Earth discovered a warpgate located in the solar system's Kuiper Belt, and another one at Alpha Centauri by 2250. The solar warpgate was the first they learned to activate, and scouting expeditions reported a vast galactic expanse in an unknown location eventually identified as Mayall's Object, a two-galaxy collision occurring in distant space. Redubbed Mayall's Galaxies, this became the center of a colonization effort. The first decade led to dozens of colonies, a major space-station, and hundreds of thousands of eager immigrants to a new galaxy, literally.

About two decades after the colonization The Drift was discovered when humanity collided with the  Kasathas, who introduced them to Driftspace drives and also the power known as the Weave, which humans equate with some sort of quasi-magical higher dimensional psionics. The Solarian orders started with the Kasathas and other races, and humans adopted them.

When first contact with Mayall's Galaxies' Kasatha happened, something else caused a problem....the warpgate shut off, and the gate parked in the Kuiper Belt of the Solar System appeared to detonate in an anti-matter backlash. The colonies in Mayall's Galaxies were cut off from Earth!

The first colonies struggled.....life was hard, and few worlds were precisely ready for human colonization without terraforming, but the colony ships with their terraforming resources did most of the work. Over the next hundred years other races were encountered, but a curious pattern emerged: many, many worlds in Mayall's Galaxies show signs of ancient colonization or the development of native species, but all of these native aliens appeared to have died out, gone extinct, or disappeared. Most of the species in this galaxy (of which there are cataloged dozens) are all natives from other galaxies just like humanity, who arrived by one-way jumpgates, were kidnapped by reptoids or grays, or got here by misfortune. Only a handful of actual native species still exist, including the Kasathas, shobad, formians and a few others (see below).

In this setting there is no other magic than what is defined in the core, and only practiced by the Mystics, Solarians and Technomancers. The optional class/spell stuff in 3PP Starfarers Companion is assumed to be nonexistent until I can review.

The Drift is still a way in to a weird other-dimensional space. That may accidentally bridge on other universes, with suitably terrifying Event Horizon-esque horrors.

The fact that most species in Mayall's Galaxy are imported means that you as the player can assume any history or background in Starfinder is acceptable, but it's all ancient history to the species, which usually follows up with a paragraph along the lines of , "And then this colony ship used the Stargate discovered at Point X and found themselves trapped in Mayall's Galaxy."

Species of this region fall into three categories: trapped species (colonists, explorers and visitors who were lured here by warpgate or other means and then cut off from home), native species (aliens that seem to have developed here as natives, or have been here so long it is hard to determine if they started as visitors from elsewhere), and Special exceptions. This breaks down as follows:

Grays: Grays, interestingly, are from the Milky Way and traveled here much as humans did. The Gray colonists arrived ten thousand years before humans did, and are distantly related to the Grays which plagued humanity's pre stellar years

Reptoids: Reptoids are native to Mayall's Galaxy, but they may have created the vast warpgates that led humanity and other species to this galaxy....possibly as traps.

Dragonkin: Dragonkin are certainly dragonlike and exist, but are either A: coincidentally dragonlike or B: an uplifted or engineered species. They call themselves the Athokar and appear not to have a recollection of their true heritage.

Drow (Hirrin): Drow are nonexistent, but have an analog of some sort called the Hirin. Their nature is a mystery, but their threat is evident.

Space Goblins (Harkoniath): Space Goblins call themselves the Harkoniath but humans call them space goblins because of how they look and act. Harkoniath live in junk flotillas and survive on piracy and salvage, having long ago stripped mined their home system. They are also a stranded race, though likely they had little to care about at whatever strip mined system they left behind.

Spacefarer's Companion Options that are okay to use:
Native Acceptable Species in Mayall's Galaxy: none
Human Uplifted/Created Species: catfolk and mechanoi are acceptable.
Species that may have arrived by Stargate and became trapped in Mayall's Galaxy: Deoxyians, Suli, Vishkanya, and Wayang may all be permissable.

Themes of this proposed campaign:

1. displacement; with few excpetions, most species are visitors and colonists, unwitting trapped in this galaxy
2. Mysteries....thousands of worlds with evidence of collapsed civilizations; why, and how? Does the convergence of two galaxies have anything to do with it?
3. Resource problems: many worlds, few still able to support life; the pressure of dozens of species to compete over the last thousand years for precious resources pushes many into necessary but unwelcome conflict


4. Isolation - humanity has been here two centuries and is barely holding on to a dozen colony worlds while aggressive species like Vesk and Shobad seek to take that from them and subjugate the new arrivals.

Fun Fact: Mayall's Galaxy is a real Galaxy about 500,000,000 LY from the Milky Way, which is called Mayall's Object. It's two galaxies colliding at interesecting angles with each other: 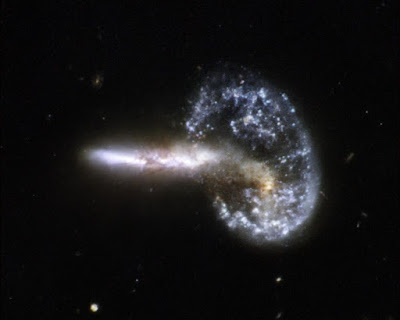 Posted by Doctor Futurity at 1:07 PM