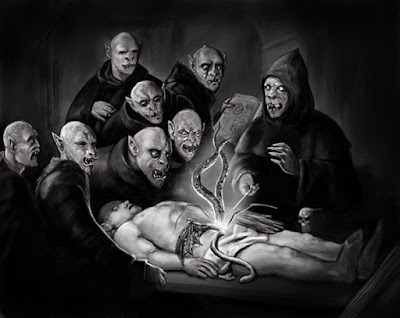 I've been updating Sarvaelen (The Watchers of the Sullen Vigil) to D&D 5E. I just can't get enough interest mustered for Fantasy AGE in my group of jaded vets, and S&W is a hard sell when D&D 5E does the same job with more. Sarvaelen in 5E would automatically use the sanity and all the gritty rest/healing rules in the DMG. Here's the Ghuls of Camrinal, adapted for 5E:


The ghuls are a survivor race, mutated descendants of a handful of Camrinal citizens that survived the apocalypse and kept their wits about them. Even hideously changed into half-dead beings the ghuls prosper, though in time it seems the madness inevitably creeps over them.

The ancient empire of Camrinal was a vast, dominant power that subjugated the old kingdoms to its rule about two hundred years ago. Camrinal not only ruled by force of arms but by force of magic as well, for it indulged the aristocracy of its era with a culture of free experimentation and arcane dabbling that eventually led to a magiocracy in which only those who demonstrated sorcerous talent were allowed to hold the reigns of power, ownership of property or positions of strength in the Empire. Magic had, in this now lost era two centuries gone, become ubiquitous.

When the fires of destruction rained down upon Camrinal in the Final Conflict, the vast majority of the old empire was wiped out, but many of its lesser citizens and a few elites survived. Today these survivors are mostly found as changed beings among the population known as the ghuls, but in some odd corners of the world there still exist untainted purebloods, though they often do not realize their own lineage.

As ghuls age they gradually begin to lose their mental faculties, and slowly go insane. When this happens they become feral creatures, driven purely by a desire to devour flesh. When a ghul dies or is slain, it returns within 1D4 days as an actual undead ghoul.


Ghul Characters: Most ghuls are likely to be NPCs and those which have lost their minds or become true undead are inevitably going to be foes, but a certain number of ghuls walk a fine line between death and madness, retaining their sanity for decades or longer. These are possible player characters. Campaigns which would allow ghuls probably focus on anti-heroes and more villainous plots and characters, but it is certainly possible that you might have a ghul who seeks redemption as a cleric of a benevolent goddess such as Nevereth, or a paladin of a divine calling.

·        Natural Weapons: Ghuls are armed with a claws which deal 1D6+strength damage and are proficienct in natural weapons. The ghul also has a vicious bite dealing 1D4+strength damage. The bite exposes the victim a nerve-damaging bacteria which acts quickly, requiring a constitution save vs. the ghul’s Constitution modifier plus 8, or suffer from a debilitating fever that causes weakness. The principle effect is 1D6 minutes long and induces nausea and severe cramping, as per the weakness condition.

·         Flesh Eaters: Ghuls engage in cannibalism to revive themselves. Any ghul that feeds off of living humanoid flesh may immediately spend a hit die and add twice their CON modifier. Ghuls experience a sort of hungry bloodlust when exposed to wounds on the living, and must make a Wisdom save (DC 12 if the target has more than half it’s hit points, DC 18 if it is wounded by half or more, and DC 22 for dying targets) to resist attacking wounded beings.

·         Fear Resistance: Ghuls have already experienced some amazing horrors in their time. Ghuls roll advantage on saves vs. fear.

·        Disease Immunity: Ghuls are immune to the effects of all disease. They are not true undead however, and still breathe.

·         Half-Dead Immortals: Ghuls don’t age. They look like zombies, with rotting skin and bones visible, clearly not being quite “alive” yet not dead, either. Ghuls are susceptible to turn undead effects. They “appear” as undead on spells that detect such conditions, but with an eerie aura of half-life suggesting something unusual about them. When a ghul does finally die, the necrosis running through its body will animate it as a true undead ghoul 1D4 days later.

·         Aging Madness: As ghuls age they develop a sort of madness and dementia, becoming increasingly dangerous and feral. For every 4 years past age 60 the ghul must make a save vs. Wisdom (DC 15+1 per every 4 years over age 60) or it loses 1 point of WIS, CHA and INT, down to 4 in each. If a ghul rolls a natural 20 on any of these saves, he regains a lost point in each (if he has lost any). 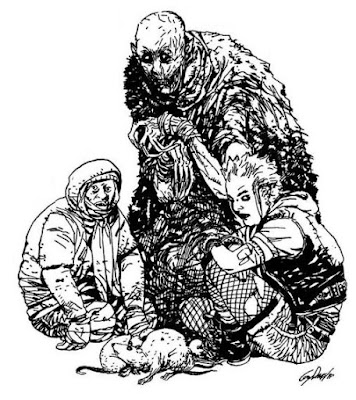 1.      There are only so many ghuls. They cannot reproduce, and only exposure to the magically irradiated wastes of Camrinal can make new ghuls (and few normal humans or humanoids seek to live there long enough for this to happen). As the ghuls gradually go mad and lose their faculties, or die and become true ghouls, their numbers dwindle.

2.      Some ghuls claim that you can cure the condition, but it requires a form of asceticisim that requires the ghul to somehow refrain from their insatiable hunger for raw flesh for ten years. These ex-ghuls are mere rumors and legend, for their success necessarily means they are no longer ghuls, thus the reality of this cure remains a mystery.

4.      There is a knight in Therinal, where the Hag rules, who wears silvered armor and always bears a closed helm. He goes by the name Naramaste, and some suspect he is a ghul paladin.

5.      A Watcher of the Sullen Vigil named Danton Seramonde once journeyed to the edge of the ruins of Camrinal itself, and claimed he saw a swarm of feral ghuls hundreds of thousands strong. Only the light of Nevereth carried him to safety….or so he claims.

Posted by Doctor Futurity at 8:35 AM