Starfinder Round Three: Ramping up the SF Element 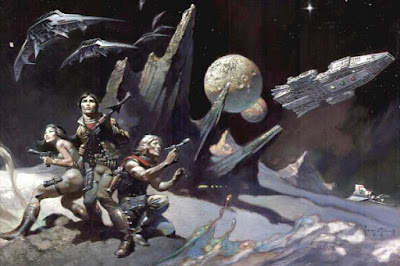 Yeah, I can't stop working on this.

Okay, so my thoughts on making Starfinder more SF:

2. Reading the history and details of the pact worlds is interesting and useful, but it's best to simply extrapolate ideas from this while deleting the "non SF" elements that won't work for what I'm intending. So....for example...purging this universe of anachronistic D&D fantasy elements would mean ditching drow, orcs and others on Apostae, for example. I could reskin this world and use it....but drow could become some other sort of space alien not connected to D&D or Norse myth to fill the void (no shortage of options there).

3. In reading through the mystic, technomancer and solarian carefully, plus reviewing most of the spells in the book, it feels like this is all easy enough to call magic but claim it's part of some enigmatic "force" (pun intended), be it psionics (Traveller and 90% of classic era SF), biotics (Mass Effect), actual space magic (that is, magic which is some fundamental principle unlocked as a result of some strange reason tied to space travel; for example, the first FTL space travel through the Drift accidentally unleashed the power of this mysterious other-dimensional magic on the world), or something else suitably enigmatic and Clarkensian enough to be indistinguishable from future technology.

I like the idea that developing FTL drive using other-dimensional physics to enter the Drift lead to the manifestation of "magic," and that this magic is regarded as some sort of paradimensional force to contend with....but now centuries old with spacefaring cultures quite used to it. It solves (for me) the problem of how technological advancement could happen at a reasonable pace in conjunction with the sort of magic coming from typical fantasy worlds by saying tech came first, magic came later. 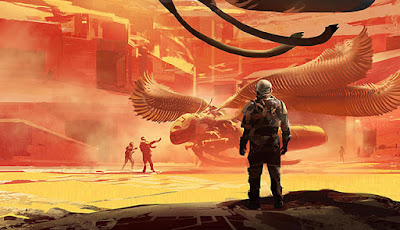 4. The concept of the drift ties in to a special deity, a magical planar realm tied to the conventional Pathfinder planar cosmology, and all sort of other implied stuff. In the new, liberated "Starfinder as slightly sterner SF, now with less fantasy" the Drift is part of the mysterious other dimensional realms which can in turn be used to account for hideous things like undead and demonic/mythos manifestations....you name it....so the idea here is "Use the drift, but make it just like any other weird SF tale where the dimension used to bypass the speed of light has weird and unintended effects, denizens, etc." In this scenario, a movie like Event Horizon dovetails very nicely with the modified Starfinder cosmology.

5. Next, the aliens in the core rules and most of the alien races in the Archive are more than suited to populating this universe, we just need to reskin some of them (like nuar and drow), delete the obvious suspects (see #1 above) and then focus on the more distinctly alien Starfinder aliens, of which there are plenty.

6. Finally, while it's not necessary, adding a connection to Earth is a good way to ground the setting in expectations and help players establish when something new and weird is ...you know... "new and weird." It's not necessary though....see Star Wars and Battlestar Galactica, for example.....but it's an idea. I think for my campaign, I'll imply that Earth is there in humanity's distant past....but so far removed that no one anywhere remembers where the homeworld is anymore. It's been lost to memory; so much time has passed since humanity left for the stars that the existence of the homeworld is more of a legend and fantasy in its own right. Ironically, to a certain extent this is precisely what Paizo tried to do by making Golarion disappear. This has the added advantage of making it easier to modify and insert the published Starfinder adventure path modules into the customized setting. 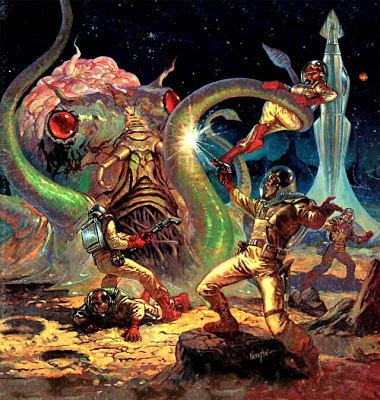