So which is more evil, Activision or EA? Hard to say, but I think my tentative money goes to EA right now. As you might have read, EA suspended the option to purchase loot boxes in Star Wars Battlefront II, which many in the gaming press have suggested was really Disney telling them to stop getting negative press for a Star Wars product right before the next movie. Makes sense.

I'd written about both of these games earlier in the month and wanted to follow up with some after action reports on where they are at now, and how I feel about them after sinking a decent amount of game time in all modes into both games. Here's the scoop: 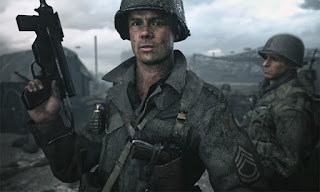 Many hours in to multiplayer and Nazi zombie modes and I can safely say that Call of Duty is benefiting from a return to a slower, more tactical experience. The offline split-screen options are solid and the AI for the bots is sufficiently challenging at the highest levels to be a good substitute for live players (at least, for purposes of my son and myself playing). The zombie mode needs more maps (there are only two right now) but it's a solid experience. They got rid of plank-nailing to control the flow of zombies, but they tempered the experience such that it's possible for two offline players to get pretty far into the zombie waves....my son and I hit like wave 11 which was almost impossible in prior CoD zombie experiences without four players online.

Online the experience is great, the multiplayer is solid, and the experience is better than it has been since Black Ops III (which I loved), but with normal mortal soldiers rather than the supersoldiers of the last few entries. The loot crate component of the game is there, and they have tried hard to push you in to the battlefield operations area where you walk around and meet other people (in theory), then open loot crates in front of them.

In CoD the loot crates are 100% cosmetic, which makes them easy to ignore. They are also less exciting than in, say, Black Ops 3 because WWII is trying to be at least a little authentic (black Germans and aggressive active female combatants in full military fatigues aside) so you can't bling your trooper out quite as badly as prior iterations of the series would allow for. But the point is....these aren't exciting loot crates, and I don't know why anyone would really spend money on them. The game lets you accrue in-game purchase points at a decent clip, and I've never felt like I was lagging behind or missing out by not spending a cent on this stuff.

As for the campaign mode, I fired it up a few more times, got really annoyed with the invisible rails, stupid health packs and intensely accurate German soldiers and decided that I didn't care. This may be the first time I may not have finished a CoD single player campaign.

Verdict: I don't regret this purchase, but I do feel that they need to come up with something more innovative and interesting for the next CoD game, but which takes a lesson from the slower and more tactical multiplayer experience. As for single player, they have got to figure out a new formula and stop making these crappy invisible rails shooters with flimsy storylines stringing together arbitrary set pieces. Solid A for the multiplayer modes and couch split-screen, but a C for the campaign. Overall it's a solid B. 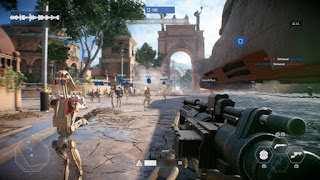 The shining gem of this title is the single-player campaign, but it's too short to carry the entire game on its weight alone. The multiplayer is a solid experience....most of the time....but it's a fractured experience. If you play it for a while you'll get the sense of what I mean: Clone Wars map, rebellion map, first order map....rinse and repeat. The game's attempt to stretch across three eras of Star Wars actually makes for a shallower experience as no single era is supported as well as it should be, and I am still irritated when you are on a Clone Wars era map and Darth Vader shows up working with the Separatists, it's just too stupid. As someone over at Cheap Ass Gamer said, why the hell can't you play Captain Panaka when you're on Naboo, or Padme, Anakin, etc? Probably because they are all coming down the pike as premium unlockables for hard cash.

EA freezing loot crate purchases with real money caused some new problems, too. First of those is: people who spent a lot of money before the option went away clearly have a battlefield advantage. As I mentioned before, early on it was clear that being a top dog meant you were in one of two categories: a rabid player who has been playing non-stop since the game started in order to earn the necessary points, or B: you spent a lot of money on unlocks and got the cool stuff. Either way, usually one guy doesn't just dominate the battlefield in two or three of the "top positions," he smashes it to bits. I've rarely seen cases where one guy gets twice the points of the #2 player in other games (including the first Battlefront) but I see that with alarming consistency here. It is a bit too suspicious.

Second, freezing the option to purchase loot crates forces players to earn the points. Well, after a certain point the accrual of these points slows down, and if you're an average player it becomes clear that the play time to get these precious points is simply not worth it. To be fair, Battlefront I had the same problem, but the difference was mainly that everyone was locked in to the same environment, and most of the time the later unlocks didn't give you a decided advantage over the battlefield in the way that they do in Battlefront II. If I didn't have all of the Jabba weapons and star cards I was still able to function just fine in the first game and even excel. Hell, once you had the jump pack, pulse card and Scout card almost all the other star cards were just fun experimental options. Unlocking those took time, but it was fun to play to that point. Getting the end-level unlocks for skins? Not so much, but who cared?

Battlefront II lives under the shadow of its loot crate controversy, which makes the painful cost of time to earning ratio for in game currency stand out. And it's own star cards are not as variant, and are not focused on gaining equipment or actions, but percentage increases and bonuses in play that clearly make a difference in player success. This is disheartening.

The offline component is oddly not as robust as the first game either, if you can believe that. There's a range of scenarios, sure, but the offline bots are rather dumb, and the maps and scenarios just don't play well in offline mode, with it feeling more like a crude shooting gallery than a decent simulation of online play. It exists, and my son enjoys it, but I do not.

The maps in all of the game modes, in fact, are more lackluster than they were in Battlefront I. I've noticed this...several of the maps are just wide open shooting galleries, with lots of clutter to substitute for more dynamic or tactical environments. They are not, on average, as well thought out as the maps in the first game. There are a couple exceptions (Kashyyk map and Maz's palace are really nice maps) but others (especially Yavin and the Imperial Landing Strip) are awful. The gameplay, especially in Blast mode, ends up being "race to one end of the map killing enemy, then get killed by enemy spawning behind you with sniper rifles." Oi.

On the plus side, I like how they balanced hero characters in Battlefront II. I really disliked the hero modes and playstyle in the first game, and those issues have now been fixed.

Verdict: It's got problems, it's effort to model three Star Wars eras somehow simultaneously made this game more robust and yet feel thinner in content than ever (plenty of heroes, but not enough for each era of play), but the actual gameplay is very solid, despite fewer quality maps, and the offline bots are idiots. So the online multiplayer is an A for actual gameplay but a D for slow progression being hampered by the idiotic loot crate system, the offline component remains a C but could have been better if the bots acted more tactically, and the single player campaign remains an A+, but it's not enough to pull this up from an overall C.