A number of new games have started filling my "to be read" shelf. If you didn't know about the following, here's a head's up: 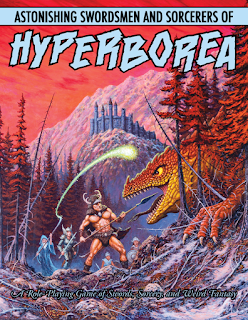 My print copy arrived last week, and after unpacking the monster I have to say it's a really impressive package. The original boxed set was very nice and retro, but this beast will hold it's own at the table, clocking in at an impressive 608 pages with a full color map insert. Everything you liked about the 1st edition --plus a lot more-- can be found within, but this time in a weighty tome that almost dwarfs Zweihander in size. Almost. I'm keeping the two together on the shelf right now, they make Hero System 6th look like a slim economy system when placed next to each other. 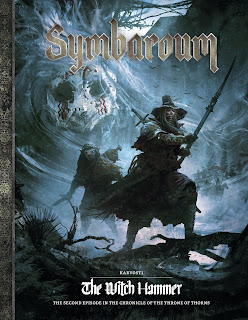 Symbaroum is a fascinating Swedish fantasy RPG in the vein of "simple rules, dark classic fantasy" with some impressive art and design. The second major campaign book is now out, and honestly, this is one of the few "packaged world setting" books I will likely run exactly as presented....one day, when I get around to it. Like the other tomes, this one is a mix of campaign setting content and modules, written in a sort of open-world style that I really enjoy.

If you're on the fence about Symbaroum, I'd liken it to a cross between Zweihander, Beyond the Wall, and Grim Dawn, but with better art design and a slick, modern system. 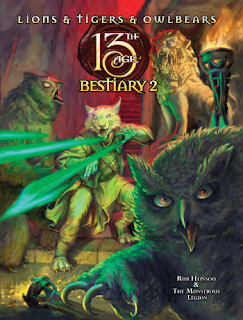 13th Age remains my favorite D&D alternative. When I am not running a D&D 5E campaign it is probably because I am running a 13th Age campaign. The new Bestiary 2 only enourages such campaigning because it is chock full of amazing monster adaptations and evocative ideas for your own games. Like the first Bestiary, but even cooler. 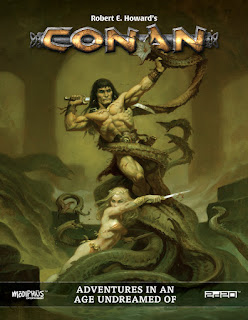 Conan: Adventures in an Age Undeamed Of RPG

I hardly feel like this one needs pimping, but now that I have a physical copy in hand and have had some time to explore it, I feel compelled to offer my support for a very well designed and researched RPG. Conan was my primary gateway in to fantasy fiction and gaming, right behind Tolkien, and evidence of Howard's (and Carter, de Camp, Nyberg, Wagner, etc.) influence in my own gaming and fiction preferences is obvious. I also (fair disclosure) wrote some books for the Mongoose edition....so seeing Modiphius make such a fine book is really fantastic, and I can't wait to give this iteration a spin. 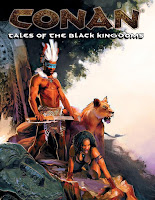 I had a chance in 2005 to write for Mongoose. I did Tales of the Black Kingdoms, and the second and third books in the Messantia Adventures set. Some of my Black Kingdoms content somehow showed up in their Return to the Road of Kings release, too. Writing for Mongoose was an interesting experience.....but the  pay was not bad, honestly. Tales was commissioned based on a book idea I pitched (I was quite happy to dive in to it). Messantia Adventures was a request....the author dropped from the project (or moved to another) after writing book one, and so I was asked to write the system material (book 2) and adventure (book 3). It was....tough, I'll put it that way...as I hated what he had done in book 1 (it had little that I felt was distinctly genre-appropriate, and was not written to be engaging), and disliked what was required of book 2. Writing social combat rules that were instructed to be in volume 2 when I felt they were not appropriate for Conan as a genre was hard, but I had a lot of fun working up the adventure in book 3. The final boxed set had a great set of cards, some not bad art, but as I recall some map errors that only lamp-shaded the problems Mongoose had with product quality, errata and typos. Tales had issues too, albeit less so than Messantia....odd typos, some changes to the adventure I didn't really follow, but overall wasn't that bad. Plus it had one of the best covers in the line, I felt.