And the winner remains: Traveller

Although there's definite interest in trying out Starfinder, my group resumed our ongoing Traveller game tonight instead. We'll rotate this with Call of Cthulhu for a while (I'll get back to the Mesopotamia campaign when I decide what system to proceed with).

Traveller (MGT2E version) remains insidiously easy and available. It helps that I've worked out most of an entire sector for my "Authority Sector" campaign, a remote region at the fringe of the Imperium where most of the local nobles have pulled their interests out and essentially subcontracted the work of sector administration and enforcement to the Sector Authority. The group has some ongoing characters who've already been involved in fairly world-shattering (literally) events, and they continue to ply their trade as mercs and traders while hoping the law doesn't catch up to them....fun stuff.

The group currently consists of a Aslan bioresearcher who has a sociopathic talent, a retired military veteran who grew disenfranchised with the Imperium, a young psionically adept woman who escaped from the clutches of an order known as the Omnium Collective, a professional cyber thief who pulled off the greatest heist ever but lives on the run and an ex mafia-type who slept with the boss's wife and has been on the run ever since. This does not include deceased former PCs!

Traveling with the group (right now) includes a young noble child who the group kidnapped for reasons even I as GM am not sure about, an aslan woman who specializes in smuggling alien embryos for research, and they're about to get embroiled in a local religious war.

The thing I love about Traveller.....at least, my games.....is that Traveller campaigns seem to go like this:
1. Show up in system, find starport, spend hours buying and selling while repairing and refuelling. Watch money go away.
2. Find patron(s) and grab job.
3. Head to planet X and in process of doing job for patron get embroiled in local politics.
4. Have horrific Reservoir-Dogs like conclusion to business, escape with lives (sometimes) and ship barely intact.
5. Go to 1. 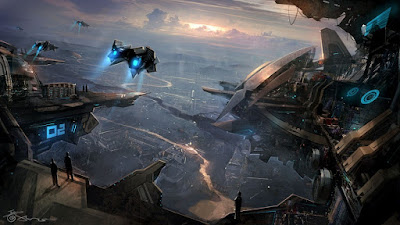 Posted by Doctor Futurity at 1:02 AM

Email ThisBlogThis!Share to TwitterShare to FacebookShare to Pinterest
Labels: Traveller