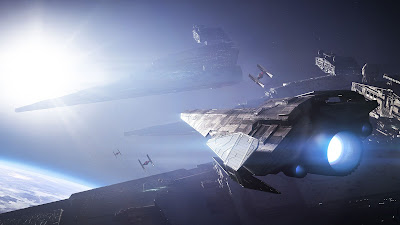 Okay, since I wrote the last blog on this I've had a few hours of multiplayer to mess around and get a feel for Battlefront II, and how it is both different and very similar to the first game. My observations so far:

First, on the in-game resources to secure hero cards, it took me about 3 hours to make enough currency to purchase Vader (15,000) or maybe a couple cheaper characters (Chewbacca at 10,000 for example). Realizing that all the hype about time spent to get the heroes in-game was not exactly accurate (even if EA did drop the cost by 75% that suggested....from the articles I had read....that the time to invest would go from 40 hours to 10 hours, for example), this seems like kind of a wash, and actually still wasn't worth my time to spend the points on since --I'll be honest-- the only one in my family who likes hero battles is my son.

I decided to invest those points in some different loot crates to see what popped up. Hero and Starfighter crates are cheaper than Trooper Crates....and I suspect that's because more people are playing troopers than anything else. This garnered a weird range, as I picked up a few of each until I ran out of my 18,000 odd resources to buy stuff. I did get one item I can't use, for Chewbacca, whom I haven't unlocked yet.....and at one point got a repeat, which simply fed currency back in to my stash.

Okay, enough of the buying...how was actual game play?

Multiplayer on Blast was --wait for it-- a lot of fun (heh). The maps are large, and a few almost felt too large, at least until you get familiar with them. More than a few (such as Starkiller Base) are weird corridor slogs with periodic open areas in which to have entrenched battled. Many of the outdoor areas are actually really dynamic, but I noticed that the game seemed to have trouble with spawn points at times. One more than one occasion I got the drop on an enemy spawning nearby, and likewise they nailed me a couple times. I suspect a future patch might address this.

The game otherwise plays like a very straight forward Battlefront experience, but the equipment mechanics are tweaked ever so slightly and you no longer have those hovering star disks to pick up for random stuff like rocket launchers and orbital strikes ("horrible strikes" as my kid says). However, ever character has a wider range of star cards, and many have stacking effects. Naturally you get these through unlocks.....and those unlocks can be done at the rate you acquire currency in-game, or they can be done through purchasing that currency with actual real money, which means that I expect at some point it may become obvious that certain players are dominating the game because they have spent enormous amounts of cash to get a full collection of cards and power ups.

In fact....I sort of wondered if I wasn't already seeing that.

The game, at the end of each session, takes three points of action and shows who did the best. This includes most points, most kills, kill assists, stuff like that. In my experience with the 2016 Battlefront you usually saw three different people showing on this "best of" roster. Occasionally you might see one guy with two or even three points of domination, but it was really, really rare.

In all the games I ran through tonight (about 20-30 I think) I saw time and again one player dominate the three "top dog" spots consistently, and occasionally a second player might squeeze in. Usually this domination was by a wide margin, 2:1 or better over the next best players. It was kind of obvious, actually. My thought was....are these players who've spent the money to level all cards? Or have they played so much in the last 2 days that they managed some serious unlocks?

It didn't impact my enjoyment of the game, mind you. I tended to fall right in around 5th to 6th place on each blast event after I got in to the rhythm of the game, and I felt like the chance to excel was there. But the obvious domination by certain players of all aspects of the records seemed.....weird. Maybe its just an issue with how the game is currently handling this; they need more "best of" stats that aren't at odds with one another (most kills will almost certainly go to the same guy who gets most points, for example).

Anyway......good stuff, and if you liked the first you'll definitely like Battlefront II. Unless you love the hero modes you're not going to miss the six locked heroes much, and by my experience so far I anticipate having them all unlocked within 20-30 hours of play at the most.

Posted by Doctor Futurity at 12:28 AM