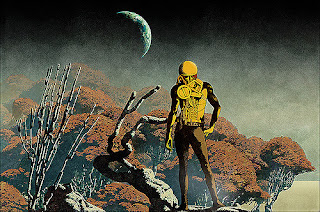 Here are a few observations and feelings I took away from tonight's Starfinder game:

1. It's definitely Pathfinder, but the little differences are just different enough to make that fact go down a tad smoother. I was thinking lot of Starfinder feels like it is built around alleviating some of the inherent design issues in the "min/max" power game aspects of the system, but the guy at the table who knows Starfinder (and Pathfinder) really, really well was already critiquing certain builds, which left a chill among all the PF survivors in the group.

2. The game was fun to play and I ran combats without a board and minis this time, mainly because we had plenty of boards but no minis, and the combats weren't too elaborate. Using "D&D 5E thought" works well enough at low level for Starfinder, but there were things that mechanically will make a different if you set it up on a board. I wish more games (including 5E) would include an optional chapter on Theater of the Mind mechanics, similar to the brilliant way in which 13th Age handles it. Once you have seen the simple beauty of a 13th Age combat in action, it is impossible to forget.

3. Throughout the game I kind of felt like despite the work I had invested in the setting ideas I had and the scenario that maybe I didn't really "get" how to run Starfinder at all, at least as a universe. I was constantly wondering to myself, "Why does technology work this way, here, when you have magic that does this over there?" as well as "How the hell did any of this grow up organically, to make any sense?" In fact it left me feeling more than ever like Starfinder is probably best played with a dedicated focus on their Pact Worlds setting.

4. The combat were smooth as mentioned earlier, but we all had forgotten just how many potential modifiers and situational special rules could come in to play. This really made me think fondly of how much simpler D&D 5E handles everything, yet to the same net effect. If nothing else it made me dramatically re-up my interest in playtesting Hyperlanes, the 5E SF hack, soon.

5. I will say that character generation is very smooth in Starfinder, and several tweaks and modifications, from the simplification of attribute point-buy to the use of themes along with the more carefully balanced classes made character generation a much smoother experience than one might expect. Hell, there are still Pathfinder classes I have never used because messing with them was just a headache.

The biggest problem I've had lately is that the only really engaging experience I've had most of this year has been with my ongoing Call of Cthulhu campaign, and to a lesser degree Traveller and the Mesopotamian campaign (until Mythras as a system got in the way). I'm realizing slowly that I have a current mechanical style that works well for the games I run, and it's turning out that this style no longer feels right with D&D/Pathfinder style mechanics. D&D 5E still gets a pass because I run worlds I am deeply invested in that were organically grown from day one to be D&D experiences, but that's the only exception.

So, my conclusions so far:

We'll probably play more of it. We all did have a good time, but with the caveat that it was still, ultimately, the same system we all abandoned due to fatigue for D&D 5E four years ago.

I think I still don't grokk the underlying intent of the implied universe and may simply dive into it as a Pact Worlds game for the near future if I run it any more.

My primary reaction to the game tonight on getting home was to write these thoughts down and pitch the following other games to the group for future one-shot test sessions:
Hyperlanes
Cold & Dark RPG
Coriolis RPG
FrontierSpace

Deep in my heart, I know that the two systems which are closest to my thematic style as a GM are Cold & Dark and Coriolis, but FrontierSpace looks awesome and I still need to read the Referee's Guide, which I have just ordered. So we'll see....
Posted by Doctor Futurity at 11:54 PM