More Starfinder Fun: Looking at how it changes D20 mechanics

Okay, Starfinder has really got me now. I'm diving deep in to the book, I'm scrubbing the rules meticulously to identify the differences between Starfinder and Pathfinder, I've written up a lengthy gazetteer of worlds to be explored and plots to be uncovered, I've got an introductory scenario, and I've talked my players on Wednesday into trying it out tomorrow, as a Thanksgiving Eve special, if you will. Even my wife might show, if she feels better (fighting a cold), and she never normally shows up to my Wednesday night game!

Part of the insidiousness of Starfinder, besides completely co-opting that creative headspace that D&D and Pathfinder both exist within and applying it directly to space opera sci-fi fantasy, is taking the very underpinnings of the overall experience and saying, "Hey, you know that thing you do over here, with fantasy? Well you can do it in space, too, exactly the same way, but also spaceships and lasers and stuff."

Spelljammer did this. Spelljammer was doing it at a time when something as creative as flying galleons in magical space seemed like just the right mix for some gamers but was totally out there for others. Spelljammer did not, however, really give you any tools to move beyond the concepts of Ptolemy, Copernicus and mythology as the basis for fantasy space exploration.

Dragonstar did it for 3.0 D&D as well, and in fact arguably did exactly the same thing Starfinder is doing, right now, just with more color art, glamour, and design ethos. Dragonstar, without a doubt, could benefit from a revival now, if Fantasy Flight Games were in to that sort of thing (it's not, alas). The entire setting of the Dragon Empire and its drow enforcers in space would fit nicely in a corner of Starfinder's implied, infinite universe. 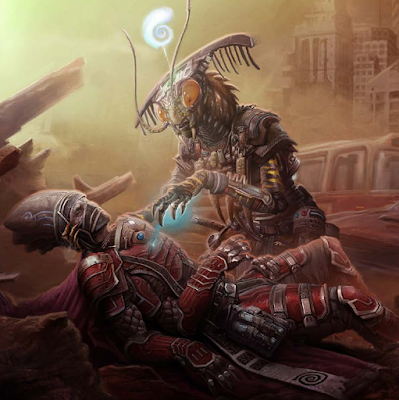 Heck, some time on ebay could net you all the Dragonstar books you need to blend something up with Starfinder. The compatibility is still there.....sort of. Actually, I'm surprised as I have read through Starfinder at just how insidious it's D20 mechanical update actually is. Some of the interesting things I've noticed.....small, but significant:

Threat rolls (where you get a critical hit but not really, you gotta roll again to confirm?) are gone. Now, if your critical hit would have hit normally, it's already confirmed. That usually means the only thing your natural 20 wouldn't auto-crit is something with an armor class so much higher than 20+ all your modifiers and attack bonuses that it would never have hit otherwise. And in those cases it's still a hit, just a normal one.

Stamina Points, which are basically hit points you regain quickly. D&D 5E has hit points you regain by spending hit dice to replenish, and it's "break" on this is that you only regain 1/2 your hit dice with a long rest. In Starfinder, you have hit points and stamina points, and hit points are regained slowly (1/day/level) and stamina points are regained with a long rest. Stamina points are literally your "second wind" and reflect everything people often say hit points have in the past of D&D....your sort of "pool of energy" depleted by fatigue, morale, getting smacked around, etc. Hit points in Starfinder are now the "oh crap I have a actual laser hole in me" points.

Reactions have been formally codified in Starfinder, in a manner consistent with how we all like to use them. They have been upgraded from the less clear mechanics in PF, and encompass opportunity attacks as well as immediate actions. More importantly, opportunity attacks and special conditions (spells and special abilities) are the only real way to pop a reaction, and you only get one reaction per turn. So guess what, no more special builds with a gazillion opportunity attacks! In fact, I don't even see a feat (like combat reflexes) anymore that messes with this stuff, although it's possible there's something buried in there as a class trait or spell.

Resolve is another fascinating mechanic: it's basically a pool of points equal to half your level plus the modifier for your primary class stat. Resolve can be used to pay for certain class and feat options that let you re-roll or do other stuff. The number of resolve you have left determine how long before you die when you are mortally wounded (at 0 HP). You recover them once per day after an extended (8 hour) rest. Resolve's not really a new mechanic...it's a spendy resource pool, something many other games have done before, but it most definitely is new to D20 and Starfinder executes it well enough that players will have ample opportunity to think hard about the gain of spending a point vs. the perk of keeping it in reserve.

Messing with modifiers seems to be a thing in Starfinder, too. I noticed an active effort to reframe certain situations which in the past were all lumped under bonuses, and therefore added complexity to stacking issues. For example, a theme might "give you a 5 point reduction in the DC" of a certain check rather than a +5 skill bonus; or An attack roll might be made against "KAC (Kinetic Armor Class) +8" rather than with a -8 penalty to attack. This change in framing appears to be done in each case to change the context of how the modifiers are applied, and while it doesn't necessarily reduce the math, it does reduce the ways that the numbers can be gamed through the stacking mechanics.

Monster Creation is a big deal for me with Pathfinder. It's not easy to do in the classic D20 rules in any edition, honestly. You either like the lengthy process of designing monsters in the same mechanical manner as player characters, or you realize how cruel the process is and how poorly it treats your precious time. I don't know if books like Pathfinder Unchained introduced some of the ideas fully implemented in Starfinder, but the Alien Archive includes a full set of rules along with handy ready-to-go charts for creating challenge-scaled foes without too much fuss. The process, after using it to create a variety of NPC foes, appears to be much more intuitive and streamlined than anything that has come before (noting that even the original PF Bestiary tried to improve the process over classic D20 3.5) and I knocked out several complete statblocks in remarkably little time (maybe 20 minutes, and lacking familiarity, for two stat blocks).

Unfortunately the Starfinder rules are missing some of the cool things already in the Pathfinder repertoire, such as the NPC Codex, or that handy roster of sample NPCs in the back of the Gamemastery Guide, but I hope Starfinder's success prompts Paizo to make such resources in the near future. The streamlined stat block and foe design process in the meantime is good enough for me to be satisfied that they designed this part of the game with the GM's precious time in mind.

Okay, enough gushing for now....I'll do an after action report in a day or two after tomorrow's test pilot game! 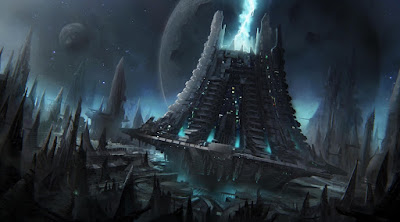 Posted by Doctor Futurity at 7:57 PM