Tieflings, Aasimars and Changelings
Humans sometimes dally with the enigmatic spirits and demons of the In-Between, which seek the company of mortals whenever they can. Among the offspring of these pairings are the tieflings, children born with demonic blood, aasimars born with celestial blood and the changelings, children that have been imbued with spirits seeking to enjoy the mysteries of the physical form. A rare variant breed of changeling is the corrupt offspring of hags and men.

All of these breeds exist in Enzada, though they might collectively number in the hundreds in any given kingdom, certainly no more than a handful at a time, but definitely more than enough to have created many a rumor and tale of their existence among the more humanocentric lands (Selindar, Waladar, Nepar and Skarkathis especially). 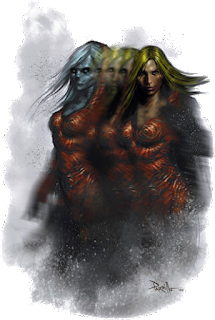 Changelings
Changelings are usually a little off in appearance (indeed, an entire race of changelings called the netherim exist in the world, though they are formed from more powerful whisps who have learned the art of spontaneously creating physical bodies from the nether of the spirit world). Changelings are always strange in manner and appearance, and while looking generally human they have traits that mark them as distinctively altered in some way, some more than others.

Changeling Statistics: Changelings are physically identical to humans in many ways but their exotic natures grant them a +2 bonus to Charisma. Changelings start with a talent for magic that usually manifests early on, gaining the Magic Initiate feat. Finally changelings seem to have an unusual sixth sense, gaining proficiency in either Insight or Arcana.

Shifter Changelings:  Changelings that are true shapeshifters do exist in Enzada; the union of a hag and a human has led to a breed identified by the same name (for only learned scholars of the occult might easily identify the two as different beings in origin). This breed of changeling is mysteriously most common in Nepar. These changelings are identical to other changelings, but instead replace the Magic Initiate feat with the ability to cast Disguise Self at will. 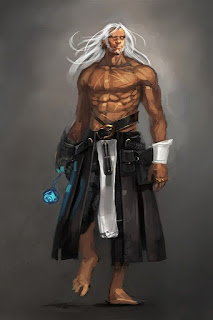 Aasimar
Aasimar are much like tieflings in that they have a hetitage derived from the planes. The benevolent spirits which add to the mix in the creation of an aasimar tend not to be from the outer darkness however, instead coming from the celestial kingdoms beyond. Aasimar are a rare breed, but always striking when encountered.

Aasimar as a race option are available as presented in Volo's Guide. 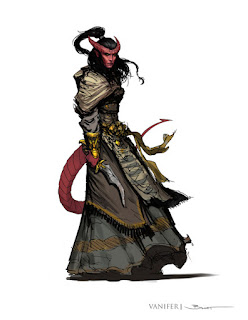 Tieflings
Tieflings are born of the mating between mortals and demons. The demons of the spirit plane are malevolent beings that also enjoy the possession of mortals, though this usually happens to adults, unlike the lesser wisps that seek to occupy a child's body. Tieflings are a byproduct of the pairing of mortals in which one or more has been possessed, though on rare occasion a mortal lured to the Outer Darkness might be directly assaulted by the demon in its native form.

Tieflings sometimes resist their heritage and become powerful sorcerers, seeking to understand the mysteries of the otherworldly   kingdoms as well as the mortal realms. Tieflings are often difficult to detect initially, but sometime during childhood they change, manifesting obvious traits from their vile parent such as horns, a tail and reddish yellow eyes. Most tieflings are forced to flee in to the wilds to escape persection. A few get lucky and find a way to seek out other like themselves, and still others draw the attention of the spirits and so-called Greyfolk of the In-Between, and are drawn into that nether realm to dwell in peace.

Traits: both changeling and tieflings are exotic in appearance but otherwise human in size and traits. Individuals should define their appearance carefully.

Changelings and tieflings are both more disturbing than normal in appearance, although among the many cultures of the Hub of Etyri such appearances can be coveted and sought after.

Tiefling Statistics: Enzada Tieflings are identical to standard tieflings in D&D, though their magical repertoire may be more varied and exotic; with the GM’s permission a player may replace a any default racial spell with any other single spell of same or lower level.
Posted by Doctor Futurity at 6:00 AM