Amidst all the other stuff going on I am working on a "West Indies" themed campaign focusing on piracy, exploration and the troubles of cultural conflict and exploitation, but all fantasy D&D style. I ran a campaign in this setting in the early nineties, but after all these years am now revisiting the concept with a bit of a reboot....here's the initial premise: 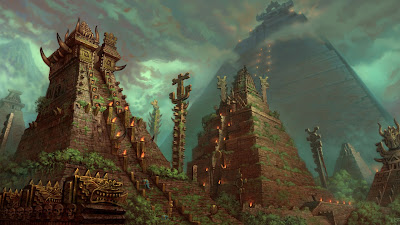 In 1,958 AW the explorer Gortham Dann Malik, great grandfather to the knight Margda Dann Malik, traveled with the Octzellan Royal Vessel  “Enki’s Grace” across the Endless Ocean and returned three years later, laden with loot, prisoners of a foreign land, word of endless islands filled with plenty and tales of daring adventure.

Malik’s exploration revealed that there was a continuation of the Nakamura Isles, which ran along the western coast of the Middle Kingdoms before stretching out to sea, and that by following the isles he discovered a safe passage across the notoriously violent Endless Ocean which, after nearly a month of travel, opened up to a vast western land of islands and an unknown mainland which he only glimpsed. The people of these Western Nakamura Isles as he dubbed them were distantly related to the eastern Nakamurans known to the Middle Kingdoms of Lingusia on the Isle of Porondor and the westernmost island of the Isle of the Watching Gods. Indeed, the easternmost island of the new lands included its own Isle of Watching Gods as well looking eastward to where distant lands lay.

The first decade after Malik’s return to home was a brief but intense period of exploration and discovery as the major powers of the Middle Kingdoms sought to establish colonies. Within fifty years all major presences in the east had staked their claims in the Western Nakamura Isles, and investigation and invasion of the mainland had begun. The colonials almost immediately came to clash with the indigenous kingdoms, including Natukan, Talay, Haxitol, Hixatec and Hochimec. Eastward, in the region dubbed Paneurika, the barren deserts and rough landscape proved less inviting but also easier to lay claim to. The local populations, especially the Hohotone, Shaote and Kuhuyak were more welcoming of the foreigners, at least initially.

Despite their lack of metallurgy beyond basic decorative jewelry, the locals were nonetheless prone to extremely sophisticated sorcery, and seemed to worship gods, especially in Mataclan, which were demonic or even chaotic in the eyes of the colonials. The War of the Dark Pharaoh was fresh in the minds of many, and a large number of colonial settlers were soldiers who fought in that war, so the western beliefs seemed especially heretical. This did not bode well for future relations, but at least initially most religious conflict was initiated by efforts to proselytize and convert the local heathens to the cults of the Middle-Kingdoms. 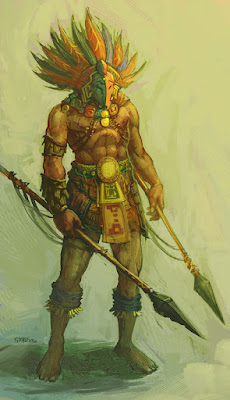 By 2,011 AW the colonies had a full two generations of citizens growing up and were feeling their own sense of independence. In 2,015 the privateer Emandre Dolvanisk of Octzel liberated the colony of Vorga on Isle Seuse, at least partially using indentured natives as a military force, promising freedom for all in exchange for their loyalty to the man. Emandre was a spry 25 when the year of bloodshed commenced, leading the the swathe of isles known as the Free Colonies. Ironically, their precarious strategic position along the Mataclan coast made them less desirable to the eastern powers, and both Octzel and Hyrkania gave up attempts to rein the isles in after a few years. Today Emandre still rules at age 104, but he looks barely a day over fifty. It is claimed that he discovered a Fountain of Youth somewhere in the mountains of Seuse Island and has benefitted from it ever since. His piratical colony is known for welcoming all, abstaining from slavery, and having no real rule of law otherwise.

The destablilization caused by the emergence of the Free Colonies led the other colonies to scramble to protect and hold their own interests between 2,020 AW and 2,050 AW a dozen skirmishes and wars were fought locally, as each side funneled more ships and resources to protect the productivity of the colonies while insuring no holdings were lost. As the presence of the eastern powers grew, so to did attention to the mainland. Many coastal colonies had fallen in Mataclan, but Hyrkania pushed to add enormous resources and manpower to hold on to Usyllyses and Hyvarik. By 2,085 a colony was founded at Port Patraeus in the northern Hochimec lands, and apparently this was too much for the indigenous kingdoms. Hixatec announced that the foreigners had been identified by their principle civic deity and lord of change, Tezcatlipoca the Smoking Mirror, had spoken to the priesthood and revealed that the foreigners were destined to destroy the Mataclani if they were not sacrificed to the gods and  driven out of the lands of the Sixth World. Within weeks, a war had begun as the other kingdoms rallied around this message driven by the Hixatec king, Seven Blades.

Seven Blades, uniting the Mataclani chiefdoms, initially burned several of the outposts founded by the Hyrkanians and Octzellans, and as of  2,087 had great success, including occupying Hyvarik. Most of the coastal colonists retreated to the isle of Usyllyses where they held strong, and Port Patraeus stood only through luck, as several Hochimec tribes who despised the Hixatec for their cruelty stood with the foreigners in their defense, and the armies fought to a standstill.

Through all this back home the empire underwent a civil war, the War of Strife, as the southern Betrayer King Makhorven was at last defeated and his heretical forces cast down. This kept the empire busy for five years, a long period in which no help was forthcoming to the remote colonies. Now in 2,092 AW Emperor Patraeus has called upon freedmen, those who wish to earn their keep, mercenaries, privateers and explorers to head west once more to protect the colonies and forge a new destiny in the name of the emperor. His motivations are driven by the heresy of the southern Divinate, which deployed demons on the battlefields against the empire to great effect. The known worship of the perceived demon gods in the region of Mataclan is now identified as heresy of the worst kind, and the emperor has effectively declared a new crusade against the Mataclani, to wipe out heresy everywhere, in every form.

Even as the emperor sends forth crusaders, mercnearies, privateers and explorers in the name of Hyrkania to conquer Mataclan, Seven Blades rallies the Hixatec empire, subjugating the Talay and the Haxitol to his will as he prepares to sacrifice all of the eastern invaders to Tezcatlipoca, sending their doomed souls to the underworld of Mictlantecuhtli. 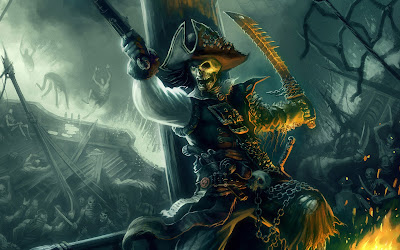