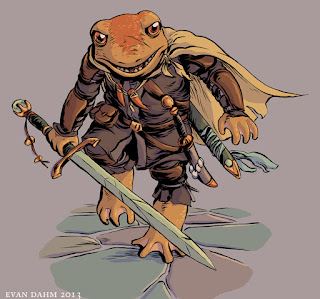 Frogmen: the Egleppi
The frogmen, also called the Egleppi, are a friendly (though sometimes suspicious) race of amphibious humanoids that dwell in the deep jungles and wetlands of the Hub. Egleppi are regarded as trustworthy by most, but they are fierce enemies of gnolls, Sarnatha and other foul kin.
Traits: Egleppi look like short humanoid frogs with sticky sucker-tipped fingers and toes. They are distinctly inhuman, but their appearance is so nonthreatening and their command of human languages so consistent that they do quite well among men.
Favored Professions: farmer, entertainer, explorer, hunter, merchant, scholar, servant, shaman, thief, tribesman
Egleppi Statistics: Egleppi have the following traits: +2 Dex, +1 Con, Speed 40 feet when distance jumping and swimming. Egleppi are proficient in shortswords and short bows. They always roll for advantage when swimming and can hold their breath for a number of minutes equal to their CON score. 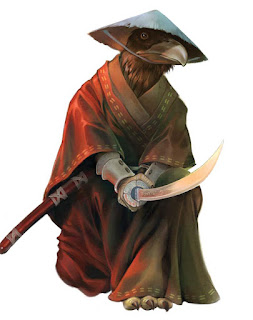 Birdfolk: the Tengu (Aarockocra)
The birdfolk of the Vanzarik Isles and along the coast of Uralhat are a notorious lot of rascals, thieves and con men who live on the edge of civilized society. They have their own kingdoms in deep remote regions of the isles, but the most typical of the birdfolk are known for their scavenger societies at the edge of human civilization.
Traits: Tengu are small, rarely more than four feet in height, and very quick. They usually have dark red or black plumage, though the males can get quite garish during mating season; roguish Tengu will often dye their vibrant plumage to avoid detection.
Favored Professions: assassin, beggar, explorer, gambler, spy, thief
Tengu Statistics: Tengu are +1 Dex and +1 Cha and gain a fly speed of 30 feet. Tengu are proficient in short spears, daggers and short bows. Tengu gain the perception proficiency and have stereoscopic distance vision; they always roll for advantage when attempting to spot distant targets on the horizon or targets that are 200 or more feet distant. Tengu also have the gift of the gab, and are proficient in either performance, deception or persuasion (choose one). 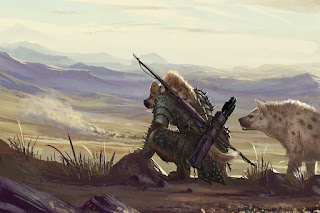 Cynocephales: the Gnolls
The cynocephalic gnolls of Enzada are not so obsessed with plunder for their demon gods in particular as they are the achievement of lost power by any means or through the worship of any entities that will offer them such. The gnolls were one of the chief enslaver-races of the old empire, recruited in its early years to fill out the ancient armies with expendable troops, and even today many gnoll warlords rise up to dominate some “lesser” races such as the Sarnatha. Still, there are some tribes of gnolls that seek to work with other races, or to at least remain open to trade and commerce. Gnolls in general can be found in the desert wilds of the Hub, and often dominate remote regions where a particularly large clan can gain a foothold. They dwell in waddle-and-daub huts and adobe fortresses, only using stone for fortification when they have enough slave labor to mine quarries.
Gnolls are closely related to other beast-headed kin, including the minotaurs, tikbalang and ibixians. Unlike their other beast-headed kin, gnolls are extremely prolific (though the ibixians try their best) and so are most common.
Traits: gnolls are cynocephalic hyena-headed humanoids with an insatiable appetite for carnage. There are several subspecies of gnoll in the world, some taller than men, some runtish.
Favored Professions: assassin, hunter, shaman, soldier, tribesman, warrior, wizard


Gnoll Statistics: Gnolls are monster kin and may be allowed as player character options at a future date. Standard PC stats apply.
Posted by Doctor Futurity at 6:00 AM