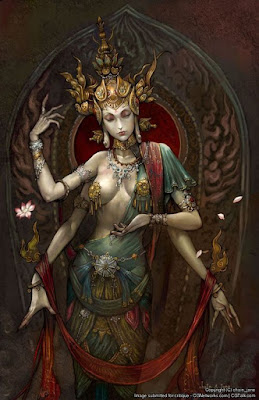 The Primal Dancing Gods of Faddasar

The Faddasari religion is far and away the most confusing and troubling to outsiders, for they embrace gods who hold clearly good and evil intent, and can be hellishly capricious. The god Shazarath might demand tribute from a starving village, for example, which the priests readily obey, only to have the priests stricken with plague imparted from the villagers to punish the priests for their greed. The gods of Faddasar seem to treat mortals as playthings to be toyed with and discarded as they wish.
Creation Myth: The Faddasari believe that the gods are in a constant dance in the night sky, and the greatest of the gods ride through the night sky upon their steeds, the planets. They are many, but in their never-ending romp through the universe they cast of swirling lines of creation and destruction, and it is a twisting tether of such cosmic fabric that weaves together to create the universe as man knows it.

Emachus the Storm Lord
This primal storm lord creates the weather with his dancing weave. His capricious and wild dance can enthrall and destroy.

Navasar the Dancer of War
This is a god of battle, and the refinement of the art. Many a warrior has prayed to this god for a bounty of skill in battle.

Etyri the Goddess of Unity
AL: LG; Domains: Light, Knowledge; Symbol: A scale and coins
She is the Northern Star and the patron goddess of the Hub, the goddess who unites, and the one by which diplomats swear by. She sings the song and plays the melodies to which her brethren dance.

Natyne, the goddess of wisdom
Natyne is a beautiful goddess and a purveyor of wisdom and thought. Her priesthood of pacifistic men and women seek to expand the realm of understanding and diplomacy, though they are not true pacifists in that there is a special sect of the temple dedicated to enforcement; these paladins are cautious protectors of the land. Natyne is presently the favored goddess of Selindar.

Yakaska                            Goddess of Baubles
Chaotic Good                   Charm, Luck, Nobility                   Faddasari Adopted Goddess (origin unknown)
The exact roots of Yakaska are unknown, but she was heartily adopted centuries ago by the Faddasari and subsequently became very popular in Selindar. Yakaska is a goddess of beauty and jewels, a keeper of wealth and beauty on display. She is a vain goddess and very popular among nobility and elite women. She is such a vain and impartial goddess that she is regarded with disdain by most other priesthoods, but there has been some concern that Yakaska’s priesthood is merely a front for more sinister political purposes. The fact that no one knows where this goddess’s cult originates from (some claim it was adopted from a Merillian cult to a goddess they call Sesera) only confounds the matter. 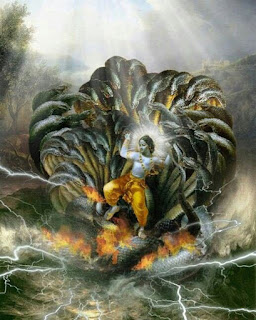 
Khashtagrat      Lord of Goats and Climbers
Neutral Good; Strength, Protection, Earth, Air; Scarkathic Deity
This Enzadan lesser god is a patron of goats and mountain-climbers, said to be a satyr-like spirit that dwells deep in the Egat’is Mountains of the south near Waladar. Khashtagrat is worshipped by a tiny monastery of monks who dedicate themselves to contemplative ways deep in the mountains.

Isalkas                              The Red Dervish
Chaotic Neutral; Skarkathic Goddess
The tribes of Skarkathis are prone to some strange beliefs, and the mystery of Isalkas, the Red Dervish, is among them. They feel that all of their gods were mortals who were stolen by the spirits of the In-Between and returned as divine beings. Isalkas is said to have been a dancing mad woman who lured men to their deaths with her beauty and he dancing deep in the deserts, and that one day she attracted the attention of desert spirits who stole her away. When she returned, she was a divine being of the desert, and an entity to be feared, the embodiment of the desert’s dangers. Only witches and the mad worship her openly, all else pay penance and hope she leaves them alone.


Another Skarkathic deity of dubious value, Merestor is the snake dancer or snake charmer, an ascended mortal who was imbued with divine properties by spirits. He is a master of serpents and it is but for his grace that men are not overwhelmed by the might of these beasts. Some say he was the first man to learn the secrets of the prehuman serpent kingdoms and turn that knowledge against them. In this sense he is a protector deity, but his other stories of destroying entire towns with serpents that did not properly revere him are a sharp contrast.
Posted by Doctor Futurity at 6:00 AM